14 Marvel Costumes for 2021: From Loki and Wanda, to Kate Bishop and Darcy Lewis

All products and services featured by Variety are independently selected by Variety editors. However, Variety may receive a commission on orders placed through its retail links, and the retailer may receive certain auditable data for accounting purposes.

It’s been a busy year for Marvel, as more and more beloved heroes make their transition from the comics to the MCU, and even more Marvel mainstays get their own stand-alone films. From “Black Widow” and Venom to ultra-successful Disney Plus series such as “WandaVision” and “Loki,” the franchise has gifted us all with even more iterations of our favorite superheroes in recent months — and a plethora of Halloween inspiration to pull from.

Here are the best Marvel characters to dress up as this year from Wanda and Loki, to Kate Bishop and Darcy Lewis.

The Black Widow gets a makeover in the Marvel assassin’s first standalone film, in which Scarlett Johansson’s Natasha Romanoff rocks an all-white suit to camouflage with her icy surroundings. With no traditional superpowers, you’ll need to pair this skin-tight getup with her electric Black Widow Bite bracelet, duel batons and pair of Glock 26s to prepare for combat.

If you want something more original, though, you can always go for Yelena Belova, another badass spy trained in the Red Room who got her own time in the spotlight in the latest film.

Alexei Shostakov is one of the most recent Marvel heroes to make the move from the Marvel comics to the MCU. In “Black Widow,” David Harbour’s Red Guardian was an absolutely scene-stealer throughout all of the action-packed film. Just don’t forget, if you’re going to dress up as the RG, you need to perfect a few things, a very thick Russian accent, a bushy beard and Alexei’s collection of  tattoos.

Beloved comic book character Kate Bishop will make her on-screen debut in the upcoming “Hawkeye” series on Disney Plus, meaning this might be the first Halloween the bow-wielding superhero will get much love. This cosplay outfit includes the same signature purple zip-up, black leggings, quiver and waist bag worn by Bishop in the comics, and Hailee Steinfeld’s version in the upcoming series. Plus, you can pair it with a Clint Barton fit for a Hawkeye couple’s costume.

Read More: The Fantastic ‘Hawkeye’ Comic You Need to Prepare for Marvel’s Next Series

There are several versions of Loki but his main iteration makes the most sense as a costume this year, considering that it’s this variant that’s at the center of the latest spin-off series on Disney Plus. This comprehensive set comes with his distinct brown khakis and a grey windbreaker, embellished with the TVA’s orange logo. Loki for president button optional.

He Who Remains played a vital role this year in “Loki,” in which his death unwittingly unleashes the Multiverse onto the MCU. Honor Jonathan Majors’ riveting take as Kang the Conquerer variant with this luxurious cosplay costume, packed with his purple satin cape and thin tunic designed with intersecting lines.

You can get meta with a Wanda Maximoff costume this year, referencing the Scarlet Witch’s very own special Halloween get-up in the “All New Halloween Spooktacular!” episode of “WandaVision.” The fun one-off costume is replicated above in tight pink leggings, red boots and her medieval-style headdress.

It only makes sense to pair Wanda’s Halloween fit with Vision’s costume, which features the same green body suit, yellow shorts and cape worn by the android superhero in the same episode. As long as you have someone to play Wanda’s part, you have the perfect couple’s costume. 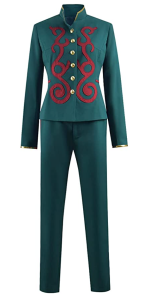 Kat Dennings’ Darcy Lewis gets a major makeover in “WandaVision.” A doctor and astrophysicist, with a pHD to boot, Lewis makes a prime costume to pair with the more typical Wanda and Vision looks. Celebrate how far she’s come from when she was first introduced in “Thor” with this circus set, referencing her recast in the Hex as an escape artist (a clever nod to the dead-end that trapped her in “Thor”).

There’s arguably no closer hero to God than Doctor Strange. Prepare for “Multiverse of Madness,” set to come out next year, in which Benedict Cumberbatch will reprise his role as the Earth’s Sorcerer Supreme, alongside Elisabeth Olsen’s Wanda. This high-quality cosplay outfit is a replica of Strange’s full costume, including his robe, burgundy cape and belt. Pair the set with the Eye of Agomotto amulet to tap into your powers.

Take part in hand-to-hand combat as Bucky Barnes, who comes back to life as the brainwashed assassin in the most recent Disney Plus series, fitted with a cybernetic arm and bladed dagger pendant to aid his marksman skills. But of course, Bucky’s tale is marked by a series of identity changes. You can always honor his path of self-redemption when he takes up the Cap mantle with this classic Captain America costume and shield (or simply go as Sam Wilson, who successfully takes over Captain America’s post by the series’ end).

Since taking over the mantle of Captain Marvel in “Falcon and the Winter Soldier,” many Marvel fans suspect Sam Wilson will be the next leader of the Avengers. With a strong moral compass and inspirational demeanor to rival that of Captain Rogers, it would be no surprise if Wilson continued to gain a larger role within the MCU. Celebrate the former Falcon’s imminent superhero promotion with this updated Captain America costume featured in the latest Disney Plus series. See here for the adult version.

Tom Hardy enjoyed a second outing as the parasitical antihero in “Let There Be Carnage” last month, making it an apt time to dress up as the Spider Man rival. The latest installment sees investigative journalist Eddie Brock struggle to adapt to daily life after becoming the host for the murderous symbiote. This costume comes complete with Brock’s flesh-eaten face so you can fully transform yourself into the creepy Marvel alien.

Read More: The Weirdest ‘Venom’ Comics to Pair With Your ‘Let There Be Carnage Viewing’

Show off your martial arts prowess in this detailed Shang Chi set, inspired by the leading superhero in the recent Marvel film. The structured top is made out of faux leather and satin for a polished look, with added black details to rival Simu Liu’s version of the iconic Kung Fu Master.

“Eternals” doesn’t come out until November but that also means that you’ll likely be the only one at the party dressed up as Ikaris, the telekinetic superhero who will make his on-screen debut next month. This homemade bodysuit features the same detailing that the all-powerful Eternal wears in the original comics.

Win a levitating Moon lamp worth £180!

How to Shop More Fairly This Holiday Season