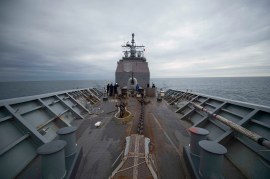 U.S. Speaker of the House Nancy Pelosi sent an important message by visiting Taiwan. Her message was straightforward: “The visit should be seen as an unequivocal statement that America stands with Taiwan, our democratic partner, as it defends itself and its freedom,” even as Taiwan faces China’s intimidating threats. The White House National Security Council coordinator for strategic communications, John Kirby, also told reporters, “The U.S. is not going to be intimidated by threats.”

Pelosi’s message matters, especially when U.S. President Joe Biden’s administration is leading efforts to rouse like-minded democracies and countries benefiting from the cross-Strait status quo to speak up for Taiwan. The United States is encouraging its Indo-Pacific allies, the EU, the G-7, and the broader international community to voice support for maintaining peace and stability through bilateral, mini-lateral, and multilateral statements. These efforts to encourage countries to release public statements in support of preserving the status quo could help deter Beijing by raising the costs and potential punishments for China if it decides to attack Taiwan.

Unfortunately, Biden and some opinion leaders blurred the message with comments they made before Pelosi’s trip. Biden told the media “the military thinks it’s not a good idea.” A New York Times opinion piece cited senior U.S. officials several times suggesting the visit was “against President Biden’s wishes.”

Beijing further drowned out calls for sustaining peace and stability by using Pelosi’s visit to intentionally fabricate a crisis and then seek to establish a more aggressive posture in the Taiwan Strait thereafter. Keeping a clear international focus on the imperativeness of maintaining peace and stability in the Taiwan Strait should therefore be a crucial part of managing the aftermath of Pelosi’s visit.

All would agree it’s important to communicate with China to manage relations between the two major powers. Some experts argue that it does not make sense for the United States to seek to establish “guardrails” since China rejects the idea. I am inclined to think the administration’s approach of setting up “guardrails” is working. For example, Washington and Beijing talked about Pelosi’s Taiwan trip in various senior officials’ meetings, and the two leaders also exchanged views on her visit directly. A bar of reducing misunderstanding through communication seems to have been met. Even so, we should keep in mind that communication does not guarantee a desirable outcome.

China seeks to exploit uncertainty and cautiousness. While it is important for any U.S. administration to act responsibly, it also is imperative for the United States to avoid ambivalence in its approach toward Taiwan. Instead, Washington should relentlessly reiterate its positions and avoid sending mixed, sometimes contradictory messages. Such messages are interpreted not only by China, but also by America’s allies and partners.

The Biden administration mishandled its communication with its allies and the broader international community over Pelosi’s visit to Taiwan. Some efforts to dissuade the speaker’s trip not only played into China’s game of intimidating Taiwan into isolation, but also bolstered Beijing’s efforts to paint the visit as a provocation with more credibility than China could amass on its own. Such actions undermine efforts to reject China’s attempts to arbitrarily argue that visits to Taiwan support its independence. They also help lend justification to Beijing’s disproportionate reaction. More broadly, they compromise efforts to form a robust international front against the resolution of disputes by force.

We are in a time when China has told created fabrications about its claims over Taiwan and backed them up with massive investments and muscle-flexing. Beijing has touted its efforts to create a common destiny for all mankind, even going so far as to write such efforts into the CCP Charter in 2017 and the PRC Constitution in 2018. They have manipulated bureaucratic notes and references to Taiwan in the United Nations system to forge supportive impressions for their narratives about Taiwan. They have further sought to sell this narrative with the release of a white paper on August 10, right after China finished a series of live-fire drills, and aerial and maritime exercises around Taiwan.

In the escalating competition with China to control the narrative, symbolic actions are substantively important. American communication with allies and partners needs to be articulate and consistent. It must resist efforts to offer compromises in hopes of placating China, because such efforts can sometimes create mixed messages with allies and partners about America’s positions.

The ideal arrangement would have been for Pelosi’s visit to Taiwan to deliver a single, clear message, which is that the international community should not allow China to isolate Taiwan into being forced to a negotiation table against its will.

Also, as Pelosi said in her Washington Post op-ed right before landing in Taipei, “The Taiwan Relations Act (TRA) set out America’s commitment to a democratic Taiwan, providing the framework for an economic and diplomatic relationship that would quickly flourish into a key partnership.” The TRA has enabled relations between Taiwan and the U.S. without diplomatic ties. This is important because China has long been trying to squeeze exchanges, whether official or unofficial, between Taiwan and the international community, including with the U.S. What has changed is not America’s “One China Policy,” as China would like to insist, but rather China’s own assertiveness. As China has grown economically and militarily, it has become more aggressive in demanding that the international community accommodate its arbitrary interests. China’s different reactions to then-House Speaker Newt Gingrich’s visit to Taiwan in 1997 and to Pelosi’s visit in 2022 provides proof of this shift.

In the current Taiwan Strait episode, the Biden administration has rightly called out China’s efforts to use Pelosi’s visit as pretext to ramp up its intimidation in the Taiwan Strait and attempt to change the status quo. Washington has criticized Beijing’s attempts to wipe away the Taiwan Strait median line by flying military aircrafts and sailing warships into Taiwan’s contiguous maritime areas.

In response to China’s bellicose behavior, the United States has announced it will kick off negotiations for a trade cooperation roadmap. It has announced new arms sales to Taiwan, and has sent two warships to transit the Taiwan Strait.

In Taiwan, President Tsai Ing-wen’s administration has also worked closely with diplomatic allies and like-minded partners to deny China’s attempts to isolate Taiwan. Since Pelosi’s visit, Taiwan has received delegations from various diplomatic allies such as Saint Vincent and Grenadine, Guatemala, Palau, and Tuvalu, and delegations from Japan, Lithuania, and France. According to a report, parliamentary delegations from Canada, U.K., Germany, Denmark, and Australia are planning visits to Taiwan as well.

With Beijing’s attempts to isolate Taiwan pretty much neutralized, the more concerning and thorny challenge is China’s efforts to establish a so-called “new normal,” in which PLA aircrafts and warships operate increasingly closer to Taiwan. These maneuvers take away crucial minutes of warning time for Taiwan’s defense forces and raise the risk of China masking an attack as an exercise. Beijing’s efforts to establish a more confrontational posture are difficult to undo without drastically escalating tensions. But as Bonny Lin and Joel Wuthnow have argued, it’s necessary to push back. Possible ways to impose costs on China’s disproportionate response could be non-kinetic and indirect countermeasures, such as setting up a joint military planning committee between Taiwan and the U.S. to better organize responses to various scenarios. Another option would be to build on the existing cooperation between the United States’ and Taiwan’s coastguards to conduct joint training in coastal waters off Taiwan’s east coast. These countermeasures would strengthen Taiwan’s self-defense and get ahead of any future efforts by China to use maritime police and maritime militia to execute jurisdictional control and gray zone activities in Taiwan’s exclusive economic zone and contiguous waters.

To sum up, a better response for the Biden administration to Pelosi’s visit to Taiwan would be consistent communication and follow-through on its longstanding One China policy. Such firm steadiness would prevent the United States from being thrown off-balance by China’s aggressive salami-slicing behaviors against Taiwan. It also would help keep the international community focused on the need for joint efforts to deter Chinese encroachment and support a peaceful solution to cross-Strait tensions.

Migos Rapper Dies at 28 After Shooting in Houston