Dmitri Matheny, flugelhorn player, shows students what it’s like to be a working musician 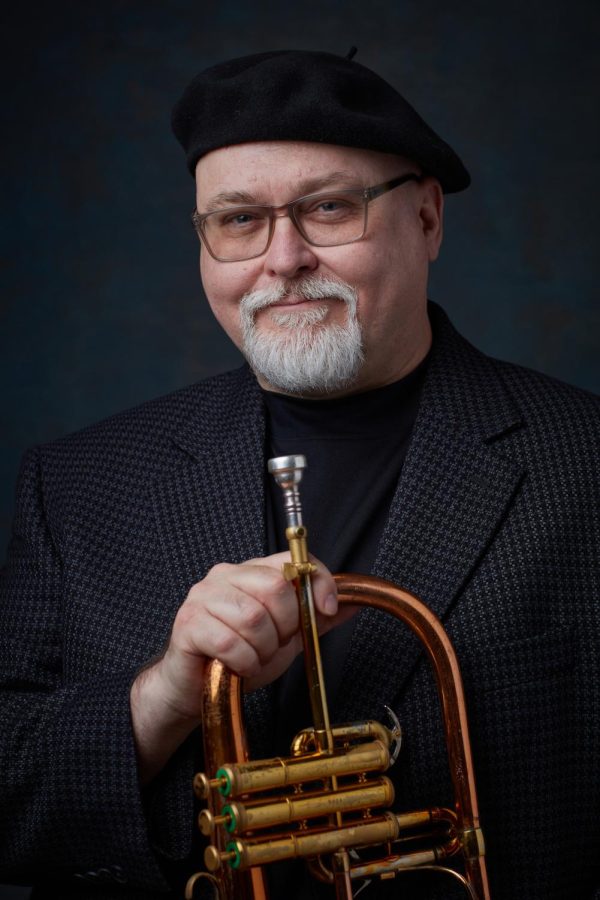 Musician Dmitri Matheny shares what it’s like to be a working musician with American River College students. (Photo courtesy of Dmitri Matheny)

On Sept. 9, the American River College music department hosted a jazz clinic by Dmitri Matheny, a flugelhorn player and touring musician. The flugelhorns’ warm and gentle tone has made it Matheny’s instrument of choice.

This brass instrument looks a lot like a trumpet but with a conical shape.

“The first time I heard it, I thought they were using a made up word,” Matheny said about hearing the word “flugelhorn.” “Like a Dr. Suess word, just to pull my leg.”

Dyne Eifertsen, co-chair of the ARC music department, attended Berklee College of Music in Boston alongside Matheny. Matheny’s enthusiasm for music and clinics have led ARC to host him a number of times.

“He’ll help the students to figure out what it is like to be a musician full-time,” Eifertsen said. “The difficulty and the joys and the sorrows and everything that comes into play with that.”

Matheny’s jazz clinic revolved around the idea of improvisation and adapting as a musician. He also shared his passion about the instrument, which is often outshined by its brass counterparts.

Adapting to changes has been something that all students and staff have had to focus on during these last few months. Scott Crow, ARC communication and public information officer, has witnessed this himself during the last few semesters.

Where to Shop for Sustainable Children’s Wear – WWD

“I’ll always remember the music folks did some livestreams and it was really interesting,” Crow said. “That was the first time I had ever seen musicians playing instruments with masks.”

Now that campus is opening up, Matheny’s visit reflects the excitement of students and staff to bring back live audiences. According to Eifertsen, there are quite a few events to look forward to.

“We had [a live audience] last semester. It trickled and is slowly starting to come back,” Eifertsen said. “We’re pretty much full board this time.”

The ARC jazz band will be doing a tribute concert series to Count Basie and The Beatles between October and November.

The concert band is going to be doing a Veterans Day tribute on Nov 11 with new director Tony Marvely.

The choir will be performing “You’re so Dramaaatic,” a piece based on musicals and other dramatic works later this semester.

“Our award-winning vocal jazz ensemble are always top notch,” Eifertsen added. “[The] orchestra will be doing a concert. We have a lot of stuff coming up.”

There are some challenges that the department still faces and that adaptability has come in handy.

“It [was] 114 degrees outside. Last year we had to do a lot of rehearsals outside and that’s when the smoke hit,” Eifertsen said. “There is always something.”