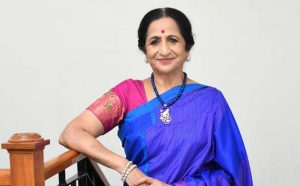 Carnatic vocalist, composer, collaborator, humanitarian and speaker, Aruna Sairam has been honoured with the French government’s highest honour, Chevalier de l’Ordre des Arts et des award. Aruna Sairam has been selected for this award not just for her singing prowess, but also for her contribution towards the development of the Indo-France relationship.

Aruna Sairam began her classical training under her mother, Rajalakshmi Sethuraman. She then became a disciple of legendary vocalist, Sangita Kalanidhi T. Brinda, thereby continuing an illustrious line of women singers of the Tanjore tradition for more than eight generations. Later, she was mentored by several other maestros of our country.

Her music has erased geographical borders when she was the first to incorporate Abhang, a Western Indian musical form, into a traditional, South Indian concert. By interacting with national and international musicians, Aruna communicates beyond regional contexts, using melody as a language of human expression.

Chevalier Award: Apart from this