World Broadcast News Your Source for News
Home Entertainment Children: The forgotten victims of war crimes | Europe | News and current affairs from around the continent | DW


Four-year-old Lisa was on her way to speech therapy with her mother when rockets hit the Ukrainian city of Vinnytsia. A video later spread online showing the empty stroller she was sitting in when the attack happened. Lisa and her teddy bear were on the ground next to it. She was dead. The Russian attack, in July, killed 23 people. Lisa was one of three children among the dead.

“The war in Ukraine is a tragic reminder that children are repeatedly the worst affected and often the forgotten victims of war,” Aurelie Lamaziere, an advocacy officer for the charity, Save the Children, told DW.

Officially, 5,827 civilians have died in the war in Ukraine, according to the United Nations, including 375 children. Ukraine and its western partners have vowed to hold Russia accountable for any crimes its troops commit, but that is likely to be a long and difficult process, with an uncertain outcome.

“Children are often a gray zone in the legal process,” Natalie von Wistinghausen, a lawyer, said during a podium discussion sponsored by the Bertelsmann Foundation in Berlin. “There are laws” to hear from children in court, she added, “they just have to be applied.”

The principle of universal jurisdiction, for example, “provides for a state’s jurisdiction over crimes against international law, even when the crimes did not occur on that state’s territory, and neither the victim nor perpetrator is a national of that state,” according to the European Center for Constitutional and Human Rights. “The principle allows national courts in third countries to address international crimes occurring abroad, to hold perpetrators criminally liable, and to prevent impunity.”

That means a German court could hold a trial for war crimes that occurred in Ukraine, involving non-Germans.

It’s unclear if cases the BKA may be pursuing involve crimes against children. Save the Children’s Lamaziere said she hopes young victims will get justice this time around.

The children in Ukraine are among the 452 million minors living in war in about 30 countries or territories, according to NGOs, double the number of affected children than 20 years ago. Of that, 27 million cannot go to school and an estimated 250,000 have been forced to fight or otherwise serve fighters, including as sex workers. 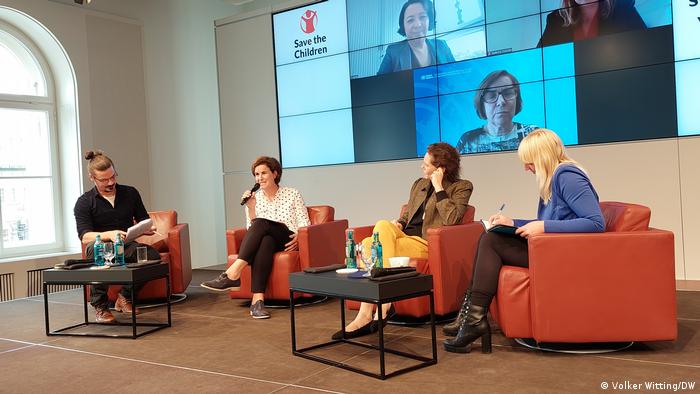 In 2021, a German court made international headlines when it sentenced a former member of the so-called ‘Islamic State’ (‘IS’) to life in prison for the killing of Reda, a 5-year-old girl belonging to the Yazidi minority in Iraq. She and her mother were sold into slavery and regularly abused.

An Iraqi citizen and his 30-year-old German wife were also sentenced for their involvement. “Germany showed then that justice can prevail. The country is its champion,” Lamaziere said.

“To do that we need more money and closer cooperation with NGOs,” she said.

The war in Ukraine could be a chance to improve things, Lamaziere said, because it has brought the issue to global attention.

“Ukraine could be a test case for war crimes against children,” she said.

While you’re here: Every Tuesday, DW editors round up what is happening in German politics and society. You can sign up here for the weekly email newsletter Berlin Briefing.