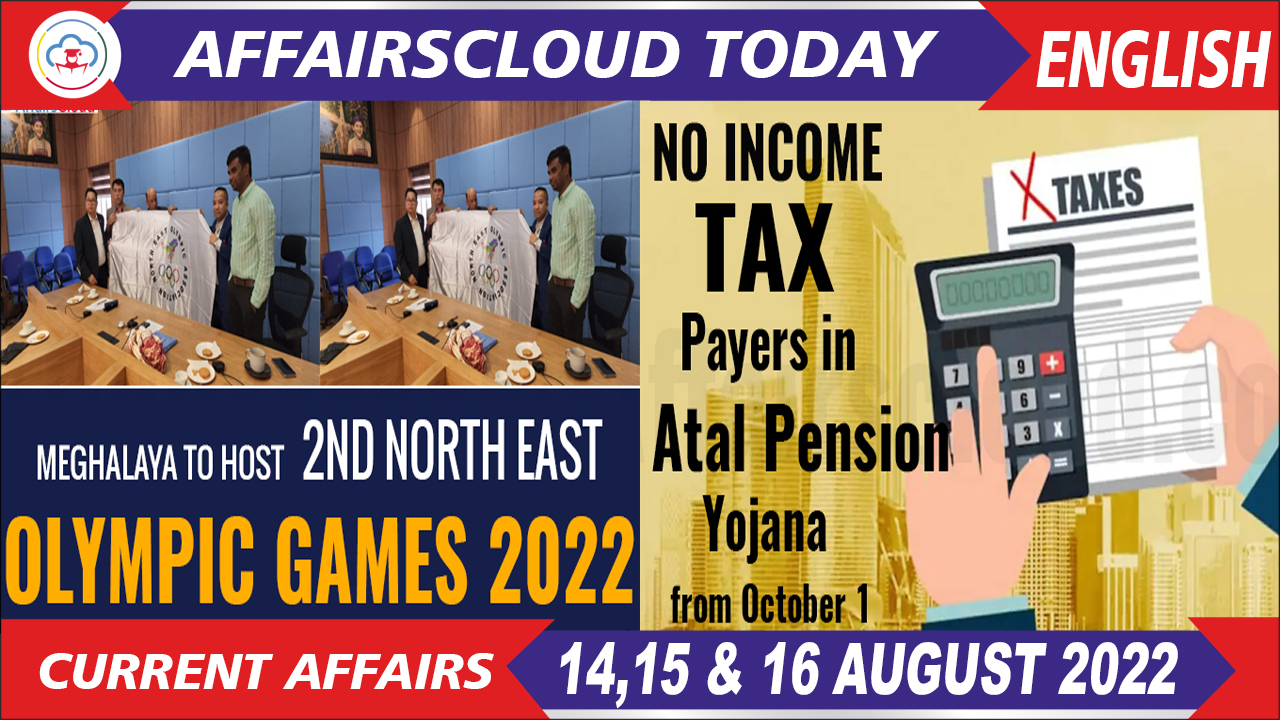 We are here for you to provide the important Recent and Latest  Current Affairs 14 , 15 & 16 August  2022, which have unique updates of Latest Current Affairs 2022 events from all newspapers such as The Hindu, The Economic Times, PIB, Times of India, PTI, Indian Express, Business Standard and all Government official websites.

Our Current Affairs August 2022 events will help you to get more marks in Banking, Insurance, SSC, Railways, UPSC, CLAT and all State Government Exams. Also, try our Latest Current Affairs Quiz and Monthly Current Affairs 2022 PDF which will be a pedestrian to crack your exams.

About SMILE-75 Initiative:
The MOSJ&E has allocated a total budget of Rs 100 crore for the SMILE project till 2025-26. It envisions developing a support mechanism for holistic rehabilitation of those engaged in the act of begging and to make sure that no person is forced to beg in order to survive and fulfil their basic needs.
Objective:
To make cities/town and municipal areas begging-free
How will this project be implemented?
This project includes a sub-scheme of comprehensive rehabilitation for persons engaged in begging which covers identification, rehabilitation, provision of medical facilities, counselling, and education, skill development for decent job, self-employment / entrepreneurship, and convergence with other Government welfare programs etc.

Participants:
The identified 75 Municipal Corporations, experts from the field of beggary and eminent NGOs participated in this nationwide launch through online and offline mode.

Income Tax Payers will Not be allowed in Atal Pension Yojana from October 1, 2022 i.As per the Ministry of Finance notification, those who pay income tax will not be allowed to enrol in the Government’s Social Security Scheme Atal Pension Yojana (APY) from October 1, 2022.
ii.This decision has been taken to ensure better targeting of pension benefits to underserved sections of the population.
iii.This notification will not apply to subscribers who have joined or join the scheme before October 1, 2022.
iv.In case a subscriber, who joined on or after October 1, 2022, is found to have been an income tax payer on or before the date of application, the APY account will be closed and the accumulated pension wealth till date would be given to the subscriber.
About Ministry of Finance:
Union Minister– Nirmala Sitharaman (Constituency – RajyaSabha, Karnataka)
Ministers of State– Pankaj Chaudhary (Constituency – Maharajganj, Uttar Pradesh); Dr. Bhagwat Kishanrao Karad (Constituency – Rajya sabha Maharashtra)
>> Read Full News

The government of Tamil Nadu  notified its 5th Elephant Reserve with a total area of 1,19,748.26 hectares at Agasthyamalai in Tirunelveli and Kanyakumari district on the occasion of World Elephant Day 2022 (12 August). Elephants play a critical role in balancing the forest ecosystems.

Note-
In 2018, the 30th Singphan ER was notified in Nagaland.
About Agasthyamalai Elephant Reserve (ER):
i.On July 13,2022 The Government of India (GoI) conveyed its consent for the creation of the 31st elephant reserve in Tamil Nadu  for the purpose of elephant conservation.
ii.The new elephant reserve will ensure conservation of the rich elephant habitats in the area and to also enrich the health and connectivity of the elephant migratory paths in the landscape through proper research and effective management.
iii.According to the notification, the forest areas of Kalakkad Mundanthurai Tiger Reserve and Kanyakumari Wildlife Sanctuary in Agasthyamalai landscape constitute the most important habitats of Asian elephants in the southernmost part of the western ghats.
Additional information:
Union Minister for Environment, Forest and Climate Change (MoFCC) Bhupender Yadav, announced the notification of one more elephant reserve (ER) in Tamil Nadu during a programme in the Periyar Wildlife Sanctuary in Kerala August 12, 2022.
Elephants in India:
i.It is included in Schedule I of the Indian Wildlife (Protection) Act, 1972 and in Appendix I of the Convention on International Trade in Endangered Species of Flora and Fauna (CITES).
ii.The Indian elephant is found in 16 states in the country and is showing an increasing trend across its distributional range. The population of the animals had become critically low in 1992.
iii.According to the elephant census conducted in 2017, the population of elephants in India has reached up to about 27,312.

Other Elephant Reserves in Tamil Nadu:

According to the Index of Industrial Production (IIP) data released by the National Statistical Office (NSO), Ministry of Statistics and Program Implementation (MoSPI), Retail inflation softened to 6.71% in July 2022 due to moderation in food prices.

The south London home of Dadabhai Naoroji lived for around 8 years at the end of the 19th century was honoured with a commemorative Blue Plaque Scheme in London, United Kingdom (UK).

iii.According to records, Washington House functioned as an important centre for the Indian community in London – a place where many Indians were invited and where Indians travelled to if they were in distress or in trouble.

known to have been guests at the house.
About Dadabhai Naoroji
i.He was born on  4 September 1825 in Navsari, Maharashtra. He  was an Indian political leader, merchant, scholar, writer and intellectual force in both India and Britain.
ii.He is a prominent member of the Indian freedom struggle and Britain’s first Indian parliamentarian.He is also  referred to as the “Grand Old Man of India” and “Unofficial Ambassador of India”

iii.He was also a member of the Welby Commission, set up by the British government to investigate wasteful spending in India.
iv.He proposed the famous Drain of Wealth theory which formed the basis of the classic Indian nationalist interpretation of British colonialism.

Razorpay Software Private Limited, India’s leading full-stack Payments and Banking Platform for Businesses, has become the 1st Indian company to be named in the 2022 Forbes Cloud 100 List of the top 100 private cloud companies in the world.

It showcased the growing importance of ‘environmental, social and governance’ (ESG) programmes in measuring long-term value and business resiliency.
Key points:
i.The top-500 list from Dun & Bradstreet, a global provider of business decisioning data and analytics, recognises private and public sector Indian enterprises across 60 sectors, based on their income, net profit, net worth and other financial parameters.
ii.For the first time ever, India’s Top 500 Companies will be ranked based on their ESG performance. The publication features a special listing of leading 500 corporates on their ESG performance
iii.The  publication also features specific corporate case studies on Sustainability and ESG initiatives
About Muthoot Finance:
Headquarters- Kochi, Kerala
Founded-1939
Managing Director-George Alexander Muthoot

i.Two players from India had qualified for this competition. One is Pooja Ojha and the other is Surendra Kumar. Surendra Kumar finished fifth in the VL1 men’s 200m series. Surendra completed his race in 1:22.97 time.
ii.Pooja Ojha  won the gold medal six times in the National Championship and was the first woman from India to qualify for the Worlds.

ii.He is well known for his work in the field of ‘Sugama Sangeetha’, a genre in which a poetry in Kannada is set to music and was also a singer with Akashvani and Doordarshan.

iii.In late 1970s and 1980s, Shivamogga Subbanna has sung many tatva pada, the songs that convey moral or religious ideas in an easy manner of Saint Shishunala Sharief along with NS Lakshminarayana Bhatta.
Achievements:
i.Awards – He was awarded with Kannada Kampu award (2006), an honorary doctorate from Kuvempu University in 2008 and Sundarashri Award (2009).
ii.In 2009, a biography on Subbanna’s life and achievements titled ‘Gauravaanvita Gaayaka Subbanna’ was published.

World Organ Donation Day is annually observed on 13th of August to raise awareness of the need for donating organs and to thank donors for their life-saving contributions.
Background:
i.The world’s first – ever organ transplantation (kidney transplantation) operation was conducted on 23rd December 1954.

ii.Dr Joseph Murray , the lead surgeon of the operation won the Nobel Prize in Physiology or Medicine in 1990.
iii.He shared the prize with Dr E. Donnall Thomas , who won the award for his work in bone marrow transplants.
Significance:
i.The day also  plays an important role in debunking various misconceptions about donating organs.
ii.Donating organs of the deceased like kidneys, heart, pancreas, eyes, lungs, etc can help save the lives of those who are facing chronic illnesses.
iii.The aim of this day is to sensitize people about organ donation so that they pledge to donate organs after death.
Additional info: International Lefthanders Day is annually celebrated on 13 August to mark the uniqueness of the left-handed people around the world. 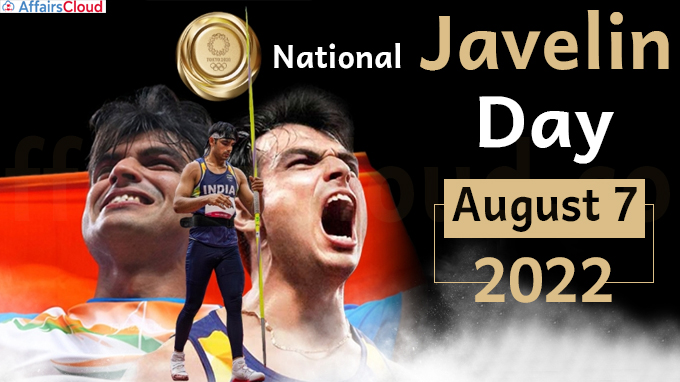 National Javelin Day:
i.Background – The decision to celebrate 7th August as National Javelin Day was made by AFI upon Neeraj Chopra’s return from Tokyo with the Gold medal in 2021.
ii.Apart from his commemoration, AFI will also promote the javelin sport at the grassroots level through this initiative.
About Athletics Federation of India (AFI):
President – Adille J Sumariwalla
Establishment – 1946
Headquarters – New Delhi, Delhi
>> Read Full News 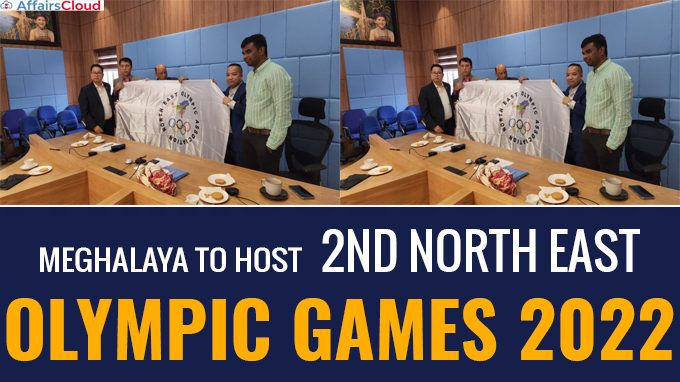 Background
i. In 2018, Manipur hosted the first edition of North East Olympics Games, which featured 12 disciplines.
ii.The second edition was supposed to take place in Arunachal Pradesh, but it was cancelled due to the COVID-19 pandemic.
The Indian Institute of Technology (IIT) Guwahati, Assam, has collaborated with the All India Council for Technical Education (AICTE) to provide solutions to problems of accessing water, electricity and internet for the AICTE-affiliated technical institutions in North-East India.
i. Most institutions in the North-East region are located in remote areas due to the hilly terrain, making access to adequate power and safe drinking water challenging.
Phases of the Project
i. The phase-1 project is slated to be completed in August 2022, while phase-2 has recently begun and will cover 33 new institutions with internet access as well as solar and water infrastructure.
About Meghalaya:
Chief Minister – Conrad Kongkal Sangma
Dance –  Do Dru-su’a; Laho dance; Behdienkhlam
>> Read Full News

Uttarakhand Chief Minister (CM) Pushkar Singh Dhami has named cricketer Rishabh Pant as the brand ambassador of Uttarakhand, who would inspire youth in the field of sports.

About Rishabh Pant:
i.Rishabh Pant, wicketkeeper-batter was born in Roorkee, Haridwar district of Uttarakhand and has emerged as one of India’s biggest match-winners in recent matches.
ii.Matches – In 31 Tests, he has scored 2,123 runs at an average of 43.32 and his individual best score is at 159 runs. Until now, he has scored 5 centuries and 10 half-centuries in the format.

iii.In the Indian Premier League (IPL), he represents Delhi Capitals and is the captain of the team.

Logan Switches to Gabby, Rachel Feels Like a Failure

Texas’ drought may last through winter despite current rains