We are here for you to provide the important Recent and Latest Current Affairs 16 September 2022, which have unique updates of Latest Current Affairs 2022 events from all newspapers such as The Hindu, The Economic Times, PIB, Times of India, PTI, Indian Express, Business Standard and all Government official websites.

Our Current Affairs September 2022 events will help you to get more marks in Banking, Insurance, SSC, Railways, UPSC, CLAT and all State Government Exams. Also, try our Latest Current Affairs Quiz and Monthly Current Affairs 2022 PDF which will be a pedestrian to crack your exams. 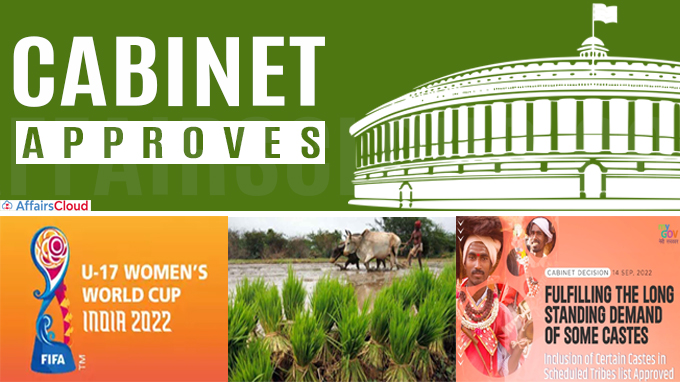 i.On September 14, 2022, the Union Cabinet chaired by Prime Minister (PM) of India Narendra Modi approved the inclusion of several communities in the Schedule Tribes (STs) list of the Constitution across 5 states, as a part of the Constitution (Scheduled Tribes) Order (Amendment) Bill 2022.
ii.The 5 states include, are Himachal Pradesh (HP), Tamil Nadu (TN), Karnataka and Uttar Pradesh (UP) and Chhattisgarh.
iii.This move will help them availing welfare benefits.
iv.The Union Cabinet approved the signing of Guarantees for hosting Federation Internationale de Football Association (FIFA) Under 17 Women’s World Cup 2022 in India.
Notably, the 7th edition FIFA U-17 Women’s World Cup 2022 is scheduled to be held in India between October 11-30, 2022 in Navi Mumbai (Maharashtra), Goa and
Bhubaneswar (Odisha).
v.The Union Cabinet also approved the setting up of Value-Added Agriculture Mission (VAAM) which aims at doubling farmers’ income in Kerala. The mission envisages the branding of ethnic Kerala foods so that they find markets in West Asian countries.

About All India Football Federation (AIFF) 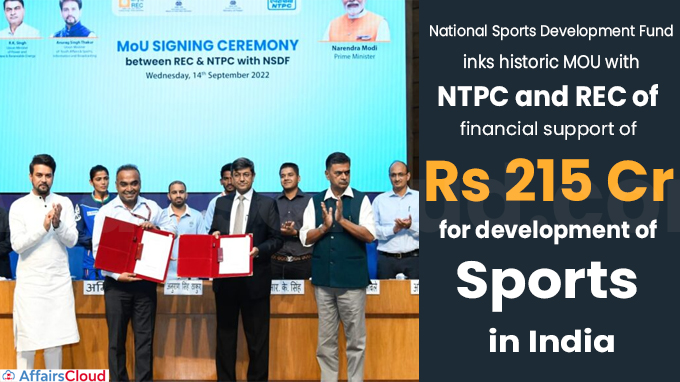 On 14th September 2022, the Ministry of Youth Affairs and Sports (MoYAS) signed a Memorandum of Understanding (MoU) with the NTPC Limited, formerly known as National Thermal Power Corporation Limited,  and Rural Electrification Corporation (REC) with the 2 Public Sector Undertaking (PSUs) pledging Rs 215 crore to the National Sports Development Fund (NSDF) in New Delhi for the development of sports in India.

Key Highlights:
i.NTPC contributes Rs 115 crore over the next 5 years to support the Archery discipline in India.
ii.Out of a total of Rs 115 crore, Rs 15 crore will be incurred as a one-time expenditure towards preparations of field targets, setting up of training centres and equipment like bow and arrow. The remaining Rs 100 crore will be used as recurring expenditure in five years (Rs 20 crore per year) towards the development of archery.
iii. REC committed an amount of Rs 100 crore over 3 years to support Women’s Hockey, Athletics and Boxing.
iv.The support towards NSDF has come through its Corporate Social Responsibility (CSR) mandate.
v.NTPC is the largest power-generating company in India. Whereas, REC is a Navratna Central PSU under the Ministry of Power.
vi.NTPC and REC have adopted both sports and athletes. And they will support Grassroots development of sports, training of identified talent, training of elite talent, coach development, sports science support, advanced training and more. 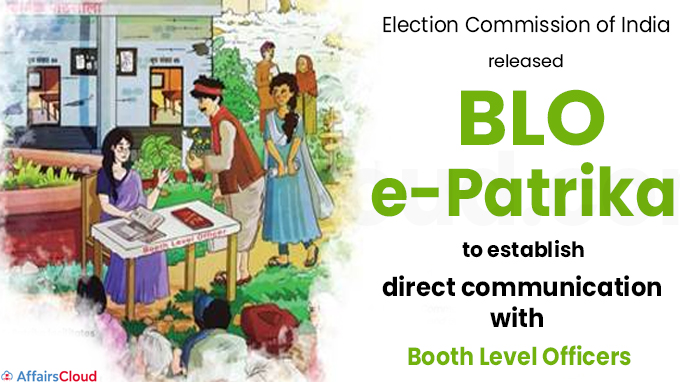 The Election Commission of India (ECI) launched a new digital publication, ‘BLO e-Patrika‘, at a first-of-its-kind direct interactive session with Booth Level Officers (BLOs) from across India at the India Habitat Centre in New Delhi, Delhi.

Roles & Responsibilities of BLOs
i.A BLO is a Local Government/Semi-Government official who is familiar with the local electorate and is typically a voter in the same polling area. 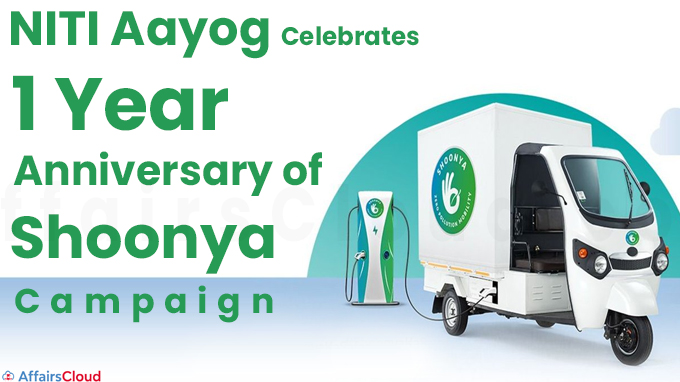 Dignitaries
Amitabh Kant, G20 Sherpa; Parameswaran Iyer, CEO of NITI Aayog; Abhishek Singh, CEO of MyGov, and others.
Shoonya Campaign
The Shoonya initiative, which aims to promote zero-pollution delivery vehicles by collaborating with consumers and industry, was launched by NITI Aayog in September 2021 with the support of Rocky Mountain Institute (RMI) based in the United States (US) and RMI India.

Key Points:
i.In India, urban freight vehicles account for 10% of freight transportation-related Carbon Dioxide (CO2) emissions, and these emissions are expected to rise by 114% by 2030.
ii.EVs generate 15% to 40% less CO2 than Internal Combustion Engines (ICEs) and have lower operating costs even during production.

iii.Shoonya will facilitate India’s five-point agenda (Panchamrit) to cut carbon emissions and secure its 2070 climate targets, as outlined at the United Nations Framework Convention on Climate Change (UNFCCC) Conference of the Parties (COP 26).

Narayan Rane Chairs 18th meeting of National Board of MSME

Union Minister of Micro, Small and Medium Enterprises (MSME) Narayan Rane, chaired the 18th meeting of the National Board of MSME (NBMSME) and Minister of State for MSME, Bhanu Pratap Singh Verma attended the meeting.

About the meeting:
i.He launched the integration of Udyam and National Career Service (NCS) portals, which was announced in Budget 2022.

ii.A Memorandum of Understanding (MoU) was signed between the Ministry of MSME and Common Service Centre(CSC) on the Udyam Registration Portal.

The Padmaja Naidu Himalayan Zoological Park (PNHZP) in Darjeeling, West Bengal has been recognized as the best zoo in India. Arignar Anna Zoological Park in Chennai, Tamil Nadu has secured the 2nd position, followed by the Sri Chamarajendra Zoological Gardens in Mysore, Karnataka.

The Central Zoo Authority evaluated a total of around 150 zoo under various parameters such as management & effectiveness and marks were given accordingly.

The PNHZP was established on 14th August 1958 and is internationally recognised for its breeding and conservation programmes of endangered animal species of the eastern Himalayas.

On 13th Septemberr 2022, ENGIE, a clean energy firm, through its subsidiary SolaireDirect Energy India Private Ltd (SEIPL) has collaborated with National Skill Development Corporation (NSDC) to train 600 youths in solar module programmes. This is a part of ENGIE’s corporate social responsibility (CSR) for the year 2022-23. 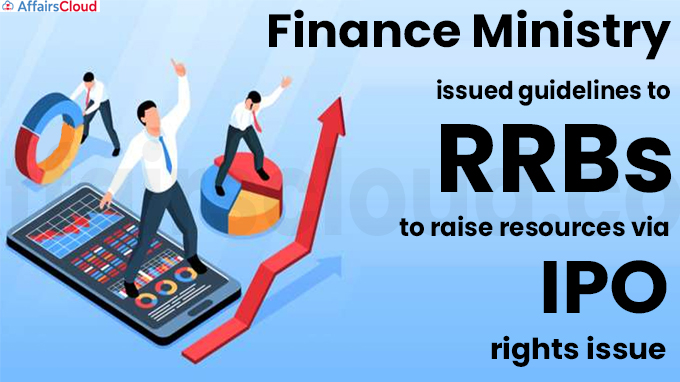 The Ministry of Finance (MoF) has released guidelines for Regional Rural Banks (RRBs) to acquire capital through rights issues, private placements with chosen investors such as large banks and insurance firms and Initial Public Offerings (IPOs).
Regional Rural Banks (RRBs)
The RRBs are jointly owned by the Government of India (GoI), the respective State Governments (SGs), and the Sponsor Banks (SBs), with equity contributions in the ratio of (GoI: SG: SB :: 50:15:35).
The Guidelines for RRBs
i.Prior to issuing shares to the public via the IPO route, RRBs should consider issuing bonus shares (to reward existing shareholders who have not been paid dividends and have first claim on the existing reserves) and a Rights Issue in consultation with merchant bankers and the sponsor bank.
ii.The total value of the issue may ideally be placed through a rights offer with the provision allowing promoter shareholders to subscribe/renounce the offer.
About Ministry of Finance (MoF):
Union Minister– Nirmala Sitharaman (RajyaSabha – Karnataka)
Ministers of State (MoS) – Pankaj Chaudhary; Dr. Bhagwat Kishanrao Karad
>> Read Full News 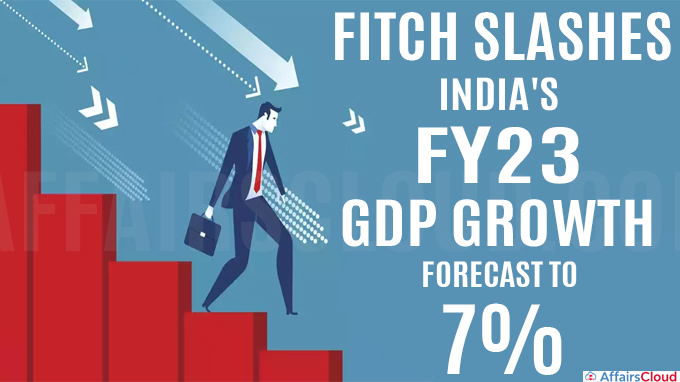 According to the Kantar BrandZ Most Valuable Indian Brands 2022 report, Tata Consultancy Services (TCS) has emerged as India’s most valuable brand, with a brand value of ~USD 45.5 Billion.

From the report:
i.According to the report, the Indian brands have increased their brand value by nearly 35 percent Compounded Annual Growth Rate (CAGR) since 2020.
ii.Infosys (USD 29.2bn) which has rocketed up to no.3 from 12th position, and ICICI Bank (USD 11bn) which has climbed two places to no.9. State Bank of India (USD 13.6bn) has also risen four places to no.6.
iii.The other top 10 companies include Airtel, Asian Paints, State Bank of India, Life Insurance Corporation (LIC), Kotak Mahindra Bank, ICICI Bank and Reliance Jio.

Highlights:
i.The combined value of India’s top 75 brands is worth USD 393 billion, that is equivalent to 11 percent of India’s Gross Domestic Product (GDP).

ii.There 14 new companies included from over 11 categories including online gaming, education, apparel and real estate, reflecting the diversity and dynamism of the Indian economy. 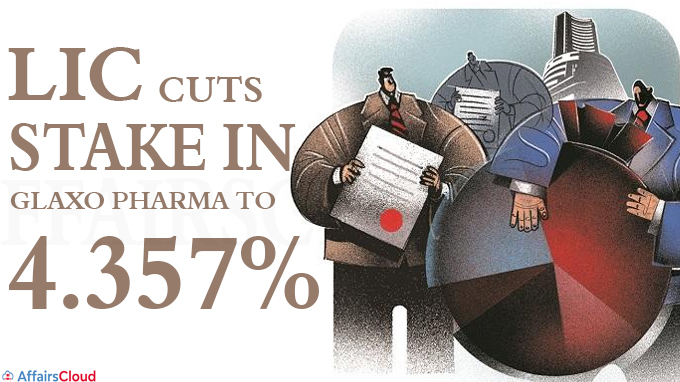 Life Insurance Corporation of India (LIC) has cut its stake in GlaxoSmithKline Pharmaceuticals (GSK Pharma) India from 6.402% to 4.357%.
Key Highlights:
i.The report to the inventory exchange has mentioned that LIC has offered about 34.20 lakh (2.045%) shares in the global pharma major during the period between September 2018-2022.
ii.According to LIC, the stake sale took place at an average price of Rs 1,549.40.
iii. On 14th September 2022, the Shares of Insurance coverage main lowered 1% to Rs.663.20 and Glaxo lowered 0.55% to Rs 1,409.90.
iv.According to the June-end shareholding pattern, the General Insurance Corporation (GIC) of India holds a 1.42% stake in GSK pharma.
About Life Insurance Corporation of India (LIC):
Establishment- 1956
Headquartered- Mumbai, Maharashtra
Chairman- M.R. Kumar

RattanIndia Enterprises’ launched its first anti-drone product called “Defender” which can can work both manually and via Artificial Intelligence (AI) which helps it to adjust its position.

Robin Uthappa Announces Retirement from All Forms of Indian Cricket On 14th September 2022, Indian cricketer Robin Uthappa, a part of the Indian cricket team that won the 2007 T20 World Cup, announced his retirement from all forms of cricket.

On 15th September 2022, Tun Dr S. Samy Vellu, Former Cabinet Minister of Malaysia passed away at the age of 86 in Malaysia.

On 14th September 2022, Naresh Kumar, the former Indian Tennis Player and Davis Cup Captain passed away at the age of 93 in Kolkata,West Bengal.He was born in Lahore, Punjab,British India. 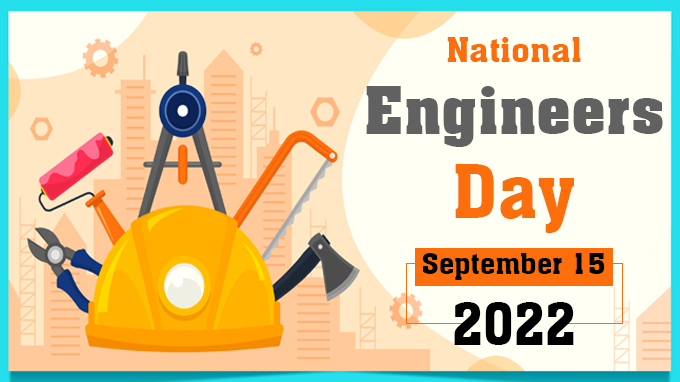 National Engineer’s Day is celebrated annually across India on September 15 to commemorate the birth anniversary of Bharat Ratna Awardee Sir Mokshagundam Visvesvaraya, who is considered one of the greatest engineers of India.

The United Nations (UN)’s International Day of Democracy is annually observed across the world -on 15 September to mark the importance of democracy and create awareness among people about democratic rights. 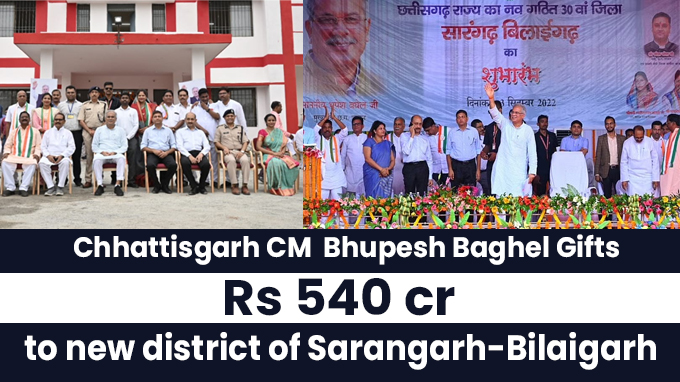 i.The Chief Minister (CM) of Chhattisgarh, Bhupesh Baghel inaugurated Manendragarh-Chirmiri-Bharatpur and Sakti as the 32nd and 33rd districts of the state, respectively.
ii.The district of Manendragarh-Chirmiri-Bharatpur has been demarcated from Koriya district. He provided development works to the district worth Rs 200 crore 73 lakh.
iii.Shakti district has been carved out of the Janjgir-Champa district. He provided 309 development works worth Rs 1 billion 53 crores 6 lakh, along with additional amount of Rs 3 crore for the development of district.
iv.The CM also announced 46 different development programs worth Rs 540 crore 32 lakh 98 thousand to the residents of the newly formed district of Sarangarh-Bilaigarh. It should be noted that before the above mentioned districts, the CM inaugurated Sarangarh-Bilaigarh and Khairagarh-Chhuikhadan-Gandai as the 30th and 31st districts of the state, respectively.
About Chhattisgarh:
Governor – Anusuiya Uikey
Festivals– Maati Ti’aar, The First Fruits Festival, Parad
Dance– Panthi Dance, Raut Nacha
>> Read Full News

Maharashtra became first state to digitise property registrations & launches ‘Self Help’ portal
The Government of Maharashtra has initiated the online registration of properties to be sold by realty developers to digitise the process, which will also involve the usage of Blockchain technology.

Key Highlights:
i.Maharashtra Government is the 1st state to enable e-registrations of first-sale property.
ii.The homebuyers of the Real Estate Regulatory Authority (RERA) approved the e-registration, which has the option to register their sales agreement online. Currently, over 400 developers in Maharashtra have chosen the e-registration system.
iii. The reason for introducing blockchain technology is to prevent duplication and tampering of registration that has taken place on an online platform.
Note: Blockchain technology (a chain of blocks that contain information) is a system of recording information in a way that makes it difficult or impossible to change, hack, or cheat the system.

And the most recent Apple ‘Far Out’ event rumours include