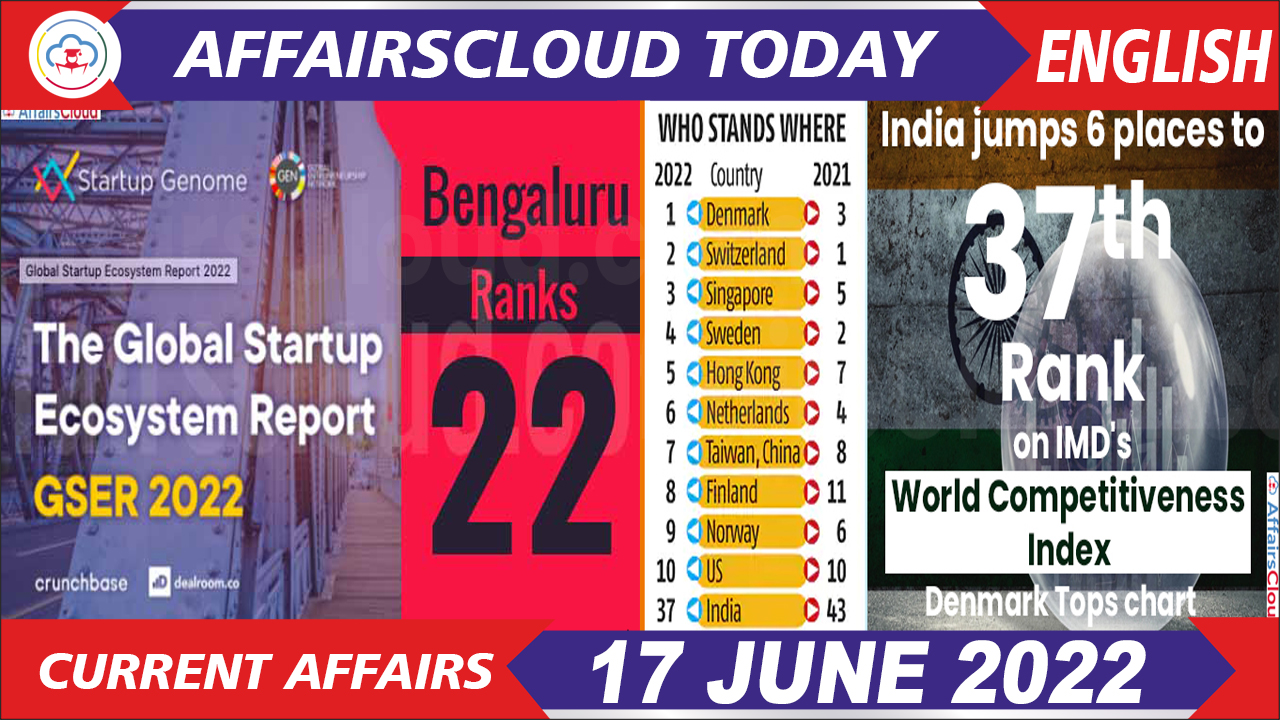 We are here for you to provide the important Recent and Latest Current Affairs 17 June 2022, which have unique updates of Latest Current Affairs 2022 events from all newspapers such as The Hindu, The Economic Times, PIB, Times of India, PTI, Indian Express, Business Standard and all Government official websites.

Our Current Affairs January 2022 events will help you to get more marks in Banking, Insurance, SSC, Railways, UPSC, CLAT and all State Government Exams. Also, try our Latest Current Affairs Quiz and Monthly Current Affairs 2022 PDF which will be a pedestrian to crack your exams. On June 14, 2022, the Union Cabinet chaired by Prime Minister (PM) of India Narendra Modi has approved the following proposals:
i.The Union Cabinet has approved the proposal for signing of an agreement between the Government of India (GoI) and the United Nations (UN) on a ‘Way Finding Application’ to be used in the Palais des Nations, United Nations Office at Geneva (UNOG).
ii.The Union Cabinet approves Agreement on Cooperation in the field of youth work among the authorized bodies of the member states of Shanghai Cooperation Organization (SCO) to strengthen mutual trust, friendly relations and cooperation among young people.
iii.The Cabinet also approved a Memorandum of Association (MoA) by India for the establishment of the Bay of Bengal Initiative for Multi-Sectoral Technical and Economic Cooperation (BIMSTEC) Technology Transfer Facility (TTF), which was signed by the BIMSTEC member countries at the 5th BIMSTEC Summit held at Colombo, Sri Lanka in March, 2022.
iv.CCEA has approved a moratorium of three years (2020-21, 2021-22 & 2022-23) to Cochin Port Authority (CoPA) on repayment of the balance Government of India (GoI) loans amounting to Rs. 446.83 crore to tide over the financial crisis due to Covid-19 pandemic.
v.CCEA has approved the proposal for development of Phase I of New Greenfield Airport at Dholera (Ahmedabad), Gujarat at an estimated cost of Rs 1305 crore, with completion time within 48 months.
vi.The Union Cabinet has approved a proposal of the Department of Telecommunications (DoT), Ministry of Communications to conduct spectrum auction through which spectrum will be assigned to the successful bidders for providing 5G services to public and enterprises.
About Shanghai Cooperation Organization (SCO):
The SCO currently comprises eight Member States (China, India, Kazakhstan, Kyrgyzstan, Russia, Pakistan, Tajikistan and Uzbekistan), four Observer States (Afghanistan, Belarus, Iran, and Mongolia) and six Dialogue Partners (Armenia, Azerbaijan, Cambodia, Nepal, Sri Lanka and Turkey).
Establishment– 2001
Secretary-General– Zhang Ming
Secretariat/Headquarter– Beijing, China
>> Read Full News Microfinance Institutions Network (MFIN), an industry association, has released the 41st issue of its Micrometer Report for Q4 Financial Year 2021-22 (FY22), a quarterly report that gives an overview of the microfinance (micro-credit) industry as of March 31, 2022 (Q4 FY22).

Key Statistics:
i. The top 10 states (based on total microcredit universe) account for 82.44 % of the industry’s total GLP.
ii.West Bengal was followed by Karnataka, Uttar Pradesh, and Maharashtra.
iii. According to the report, the East, Northeast, and Southern regions account for around 64% of the microfinance portfolio.
iv.As of March 31, 2022, India’s overall microfinance industry had a total GLP of Rs. 2,85,441 crore, a growth of 10% year on year (YoY) from Rs. 2,59,377 crore as of March 31, 2021.

Lender-Wise Distribution
i. With a total loan outstanding of Rs. 1,14,051 crore, or 40% of the total microcredit universe, 12 banks had the greatest share of the portfolio in microcredit.
ii.With a loan portfolio of Rs. 1,00,407 crore, Non-Banking Financial Companies-Micro Finance Institutions (NBFC-MFI) are the second largest providers of micro-credit, accounting for 35.2 % of the total industry portfolio.
iii. Small finance banks (SFBs) have a total loan amount outstanding of Rs. 48,314 crore, accounting for 16.9%, followed by NBFCs at 6.9%. Other MFIs make up 1% of the overall universe.
Observations From the Report
i. According to the report, the proportion of NBFC-MFI portfolios in the universe portfolio climbed by 4.1 % to 35.2 % as of March 31, 2022, however banks remained the primary contributors.
ii.The geographical distribution of the portfolio also changed, with a decrease in the share of the east and northeast by 3.3 %, while the south and north regions increased by 1.3 % each.

Dharmendra Pradhan, Union Minister, Ministry of Education announced that the Government of India is set to establish “PM Shri Schools” which are fully equipped to prepare the students for future. These state-of-the-art schools will also act as a laboratory for the New National Education Policy(NEP) 2020.

On 14th June 2022, Startup Genome, a world-leading innovation policy advisory and research firm, released the Global Startup Ecosystem Report 2022(GSER 2022), the 10th-anniversary edition of GSER, at the Elevating Founders event of London Tech Week 2022 (13th to 17th June 2022).
Various Indian ecosystems have risen in the ranking compared to 2021 ranking.
Bengaluru, Karnataka has ranked 22nd on the global ranking, up one place from the 2021 ranking, while Delhi has moved up 11 places and ranked 26th and Mumbai is ranked at 36.
Bengaluru:
i.According to the report, Bengaluru has ranked 5th on the global stage for tech venture capital (VC) investment in 2022.
ii.Bengaluru, Karnataka is among the top 20 in the Global ecosystem in Bang for Buck, among the top 15 in the Global Ecosystem in Funding and among the top 25 in Global Ecosystem in Performance.
>> Read Full News 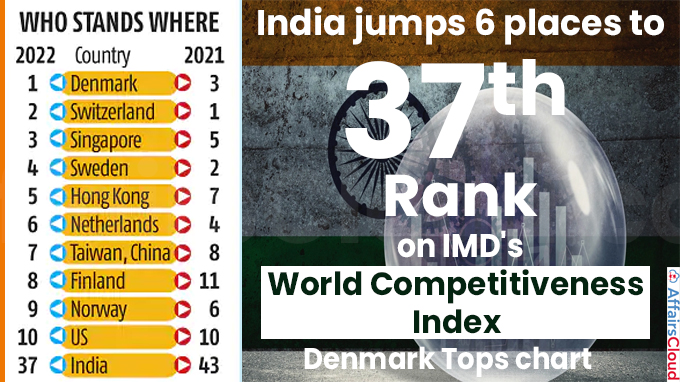 The United States of America (USA) has announced the formation of I2U2, a new group that includes India, Israel, the USA, and the United Arab Emirates (UAE). 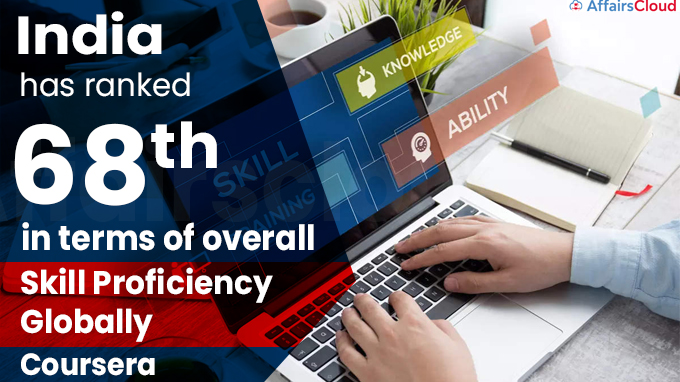 Note – The reports estimate that 28 million new technology jobs will be created in India by 2025.

ii. India scores low on foundational and specialised data science skills like Data Visualisation (10%), Statistical Programming (14%), Data Management (22%) among others.
iii.According to the GSR 2022, learners in India are over-indexed in skills such as investment management (1.38x), blockchain (1.33x) and risk management (1.22x).
Statewise Report of India:
i.India’s West Bengal state ranked No.1 in terms of skills proficiency across the three domains and also earned a perfect 100% proficiency in more than 10 skills, across the three domains, such as leadership & management, human resources, cloud computing, computer programming, ML, and data analysis.
ii.Karnataka ranks No.4 in technology and No.6 in data science.
iii.Andhra Pradesh is one of the top 3 performing states with high proficiency in business and technology skills, including 100% proficiency in security engineering, operating systems, and computer networking. CASHe’s WhatsApp Instant Credit Line
i. CASHe’s WhatsApp chat service is built on the WhatsApp Business Platform,an enterprise solution that enables businesses to engage with new and existing consumers on WhatsApp in a simple, secure, and reliable manner.
ii.Leveraging WhatsApp’s growing user base in India, CASHe has become the first fintech (financial technology) firm to offer the service using its AI-powered chatbot.
iii. During the beta stage, the service gained a lot of popularity with clients, with a near-zero delay in approving credit limits for KYC (Know Your Customer)-compliant customers.
Features of CASHe’s WhatsApp Instant Credit Line
i. This service is available to all salaried customers, and any customer can use it by sending a “Hi” message to CASHe’s WhatsApp number +918097553191.
ii.An AI-powered bot underpins this service, matching the customer’s inputs and automatically facilitating a formal application as well as a KYC check.

iii. The borrower’s details will be generated and displayed depending on the name entered – the only key input required at the start of the conversation.
Note: V. Raman Kumar is the Founder & Chairman of CASHe.
About CASHe:
CEO – Dhruv Jain
Founded – 2016
Headquarters – Mumbai, Maharashtra 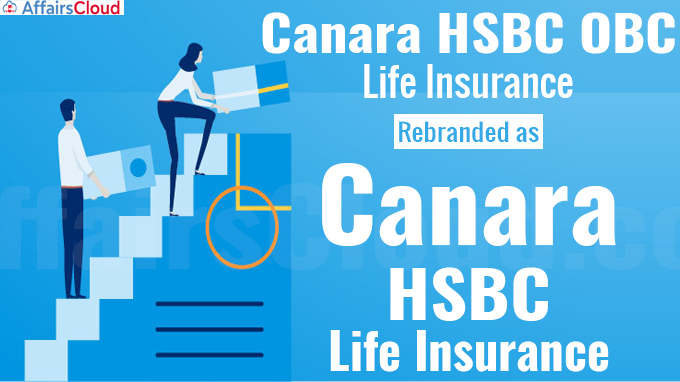 On 15th June 2022 Canara HSBC Oriental Bank of Commerce (OBC) Life Insurance renamed itself as Canara HSBC Life Insurance, coinciding with its 14th Foundation and launched its 1st brand campaign #PromisesKaPartner aligned to its new positioning  and its campaign tagline is ‘Powering India to re-imagine their dreams and aspirations’. About Hamza Abdi Barre
i.Hamza Abdi Barre, served as the chairperson of the Jubaland Independent Boundaries and Electoral Commission in 2019-20 and is the 1st prime minister to emerge from Somalia’s Ogaden clan.
ii.He has served in several public and political roles and from 2011 to 2017 he was secretary-general of the Peace and Development Party (PDP), the precursor to the Union for Peace and Development (UDP) now led by Mohamud.
iii.He has also been involved in the education sector, co-founding Kismayo University and leading a community-based network that aimed to rebuild Somalia’s schooling system.
About Somalia:
President – Hassan Sheikh Mohamud
Capital – Mogadishu
Currency – Somali Shilling 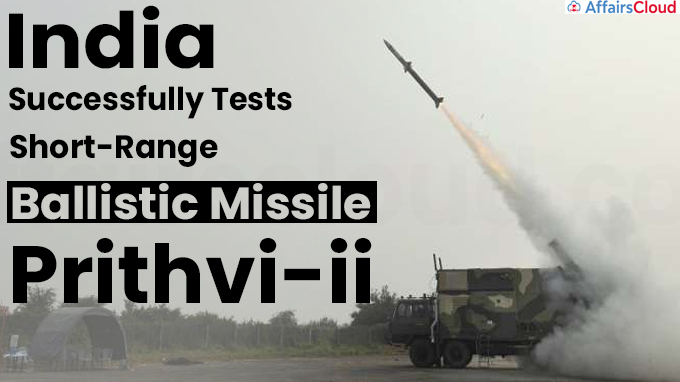 On 15th June 2022 India successfully carried out the night launch of a Short-Range Ballistic Missile, Prithvi-II from an integrated test range, Chandipur, Odisha.

About Prithvi-II:
i.Prithvi-II is a surface-to-surface short-range ballistic missile (SRBM), developed by the Defence Research and Development Organisation (DRDO) of India under its Integrated Guided Missile Development Program (IGMDP).

ii.The missile is a single-stage liquid-fueled missile that has a maximum warhead mounting capability of 500 kg, along with 250 km extended range and it can be launched from a mobile launcher.
iv.Prithvi-2 missile can carry a weapon ranging from 500 to 1000 kg and is powered by a two-engine liquid propellant.

Background – In February 2018, Prithvi-2 missile was tested at night from Chandipur, Odisha, after which two consecutive tests of Prithvi-2 were done in November 2019.
About Prithvi Missile:
i.India has three Prithvi missiles with Prithvi-1 having a range of 150 km, Prithvi-2 with 250 km range and Prithvi-3 with 350 km range.
ii.On 27th January 1996 the missile was 1st test-fired and the development stages were completed in 2004.
Note – Prithvi series was the 1st missile developed by IGMDP and inducted into India’s Strategic Forces Command.
About Defence Research and Development Organisation (DRDO):
Parent Ministry – Ministry of Defence (MoD)
Chairman – G. Satheesh Reddy
Headquarters – New Delhi, Delhi
Formed in – 1958 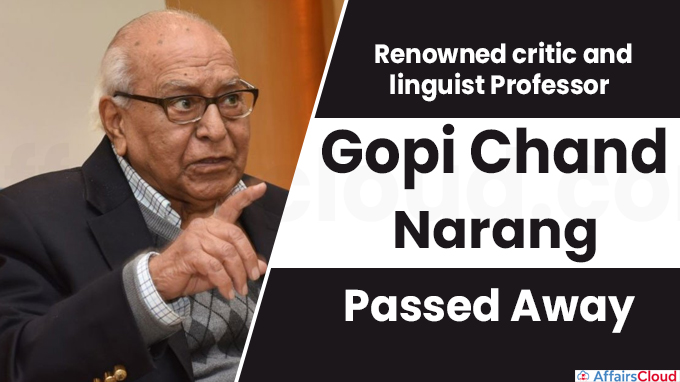 Awards & Honours:
i.Gopi Chand Narang has received the title of Padma Bhushan (2004) and Padma Shri (1990) in India.
ii.In 2012 He was conferred with Sitara-i-Imtiaz (Star of Excellence) in Pakistan and he received the Sahitya Akademi Award in 1995.
iii.He is the only Urdu writer honoured by the presidents of both India and Pakistan.
About the late scholar
i.He held the Professor Emeritus position at Jamia Millia and Delhi University.
ii.In addition to teaching, Professor Narang was Vice-chairman of the Delhi Urdu Academy (1996-1999) and the National Council for Promotion of Urdu Language – HRD (1998-2004) and Vice-president (1998-2002) and President (2003-2007) of the Sahitya Akademi which is dedicated to the promotion of Indian literature in the 24 languages of India..
Books:
i.He worked extensively on explaining and analysing the works of Ghalib, Mir Taqi Mir and later Faiz Ahmad Faiz and Firaq Gorakhpuri beyond thematic and typical writings.
ii.He has published more than 65 scholarly and critical books on language, literature, poetics and cultural studies in Urdu, Hindi and English including 10 books for children under the title ‘Let’s Learn Urdu’ in English and Hindi.
iii.Few Famous books – Ghalib, Hindostaan Ke Urdu Musanafeen Aur Shora, Kaghaz-e-Aatish Zada, Jadeediyat Ke Baad, Kulliyat-e-Hindavi Ameer Khusro 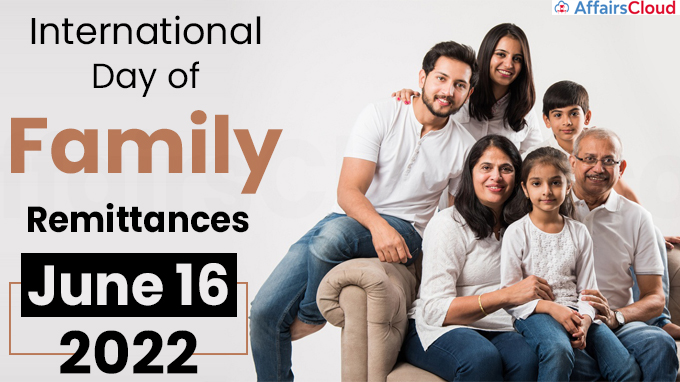 The Government of Haryana and Israel have signed a joint declaration on integrated water resources management and capacity building. This marks a significant event as India and Israel celebrate 30 years of diplomatic relations. Water security has been one of the most important pillars of the India-Israel relationship.

Key Points:
i.Through this joint declaration, both Israel and Haryana(India) will,

What is flexitarianism? | Easy Food

Local butcher Michael Fleming fills us in on how to get the most bang...

Computer Science Education and The Workforce