The LVMH Moët Hennessy Louis Vuitton-owned brand is bringing a Dioriviera pop-up boutique, conceptualized by Maria Grazia Chiuri, as well as a spa takeover, to the Montauk, New York, hotel. Both spaces opened Friday, and will be open at the resort through Sept. 5.

Taking over exotic locales isn’t new for Dior, across both beauty and fashion — this summer’s pop-ups on the fashion side include resorts across Europe and Asia — but the collaboration marks the first Dior spa activation in the U.S. and the first time the fashion and beauty businesses, which operate separately, are converging on a single hotel in the American market.

The 360-degree approach comes as the brand dips its toes into lifestyle offerings. When Dior partnered with the LVMH-backed Cheval Blanc hotel in St. Barths in 2021, Pietro Beccari, chairman and chief executive officer of Christian Dior Couture, told WWD that “LVMH is a lifestyle in all the brands that it’s representing.”

“…There’s a natural push to collaborate more and to exchange more in terms of doing something together,” he continued at the time.

On the fashion side, two different rooms at Gurney’s will feature the Dioriviera capsule collection, replete with accessories, skirts, dresses and swimwear in the brand’s toile de jouy print. That extends to the boutique’s visual merchandising as well, which includes relief toile de jouy wallpaper along with a dressing room.

Outside of the rooms, a sun deck showcases Dior Maison homewares from the brand in the same print, from parasols to chaise longues, butterfly chairs, skateboards, a handheld fan and a surfboard, all of which are for sale. Toile de jouy-printed animals flank the seating area. 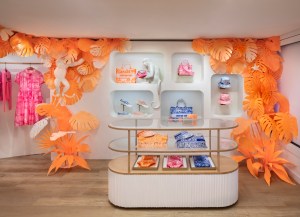 Dioriviera pop-up boutique at Gurney’s Montauk Resort.Cocktails inspired by the same pattern, as well as wine and Champagne from LVMH-owned producers, will be available on the deck as well.

Globally, the brand’s fashion and leather goods performance has fueled growth at its parent company. That division in the brand’s parent company grew 30 percent for the first quarter, as reported by WWD, fueled by Dior and Louis Vuitton.

The beauty performance is just as stellar. Dior Sauvage is the top selling prestige fragrance in the U.S., across men’s and women’s categories, and the brand is the second largest share gainer in both makeup and beauty overall, according to the NPD Group. François Demachy, Dior’s perfumer-creator, recently received a Lifetime Achievement Perfumer Award at the 2022 Fragrance Foundation Awards.

Gurney’s will carry an assortment of Dior products across categories and ranges, both in the fashion boutique and the recently renovated Seawater Spa.

The spa treatment room marks the brand’s first time bringing its treatments to the U.S. The menu includes three facial treatments and two body treatments, ranging in price from $270 to $450, incorporating products from the brand’s L’Or de Vie and Dior Prestige ranges.

The treatment room comes with a private deck and outdoor bath, and Dior-printed deck chairs.

For more from WWD.com, see:

Reimagining Rural: Shifting Paradigms About Health and Well-Being in the Rural United States