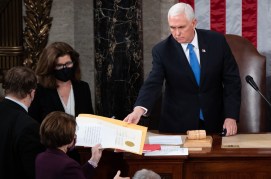 The “election denial” movement originated in the efforts to overturn the 2020 election. It included false claims about the power of the Vice President and Congress to turn aside presidential electors. Although illegitimate, these claims were facilitated by ambiguities under the almost 150-year-old Electoral Count Act (ECA) that in part governs the roles of Congress and the Vice President.

Both houses of Congress have recently taken steps to reform that law in ways they hope will resolve those ambiguities and so reduce future opportunities for mischief. Updating and clarifying this arcane law is badly needed, and in this post, we evaluate the bill passed by the House and the one poised for passage in the Senate. Both have advantages in common, but in our view the House version better addresses the risk by closing more loopholes and avoiding potentially opening some new ones.

As a threshold matter, we should note that while reform to the quadrennial presidential elector selection procedures is necessary, it is not sufficient to address the across-the-board impacts of election denial. Other critical areas of election law are starved for attention. With more than 300 election-deniers proposing to make voting harder—not to mention the Supreme Court yet again contemplating efforts to chip away at the Voting Rights Act of 1965—more energy should be devoted to analyzing broad voting rights reforms.

Congress is proposing three key improvements to the ECA

On September 21, the House passed its ECA reform proposal, the Presidential Election Reform Act (PERA). Shortly thereafter the Senate Rules and Administration Committee took up an updated version of the Electoral Count Reform Act (ECRA) (about which one of the authors of this piece testified before the Committee earlier this summer). That version of the bill was sent to the Senate floor for consideration on October 18 with bipartisan support. It remains on the Senate legislative calendar awaiting a vote.

Though the two proposals diverge in a handful of significant ways, both include reforms that would address three critical shortcomings of the ECA.

Both proposals jettison the ripe-for-abuse “failed election” provision of the ECA. That provision gives state legislatures the power to appoint presidential electors if a state has held an election but “has failed to make a choice on the day prescribed by law….” The original drafters created this provision in the event a “force majeure” act, such as a major natural disaster, completely blocked an election from being held. But their text unfortunately leaves room for mischief. The law does not define what it means for a state to have “failed to make a choice,” and in 2020 some election deniers postulated that a state legislature could simply declare that the election had “failed” and then unilaterally appoint electors regardless of how people had voted.

The dangers of this provision seem even greater now against the backdrop of current election-deniers who continue to push for the decertification of the 2020 election results, however implausible. But if we look ahead to 2024, it is possible that a “rogue” state legislature might attempt to overturn that election’s results by asserting the presence of widespread voter fraud and arguing that it produced a “failed” election.

Thankfully, the authors of both congressional proposals recognize the dangers posed by the purportedly vague “failed election” provision. Both the Senate ECRA and the House PERA would do away with the provision altogether. The ECRA, instead, would allow a state to “modif[y] the period of voting, as necessitated by force majeure events.” Similarly, PERA would allow for the extension of an election only when a “catastrophic event,” which the bill defines carefully, has occurred.

This move to eliminate the current “failed election” provision by the House and Senate makes sense as a policy matter. It eliminates any language that could be perceived as empowering a rogue state legislature to unilaterally appoint electors while preserving some necessary room for maneuver in the event of a genuine disaster. This improvement would not only protect against the rising threat of election denialism but would also bring the text of the law more closely in line with what the ECA drafters originally intended.

The next bicamerally endorsed improvement clarifies the Vice President’s role during Congress’ certification of the Electoral College vote count. That role is set by both the ECA and the Twelfth Amendment of the Constitution which provides simply that the Vice President “shall…open all the certificates and the votes shall then be counted.”

Centuries of practice and the ECA’s history indicate that the role of the Vice President (acting in his capacity as President of the Senate) is strictly limited to opening votes without judging their validity or trying to block them from being counted. But the ECA does not say so in the most overt and explicit terms possible.

In early 2021, Trump and his allies tried to push a legally unsupportable vision of the Vice President’s role. They pressured then-Vice President Mike Pence to unilaterally reject the electoral votes from certain states in a last-ditch attempt to overturn the 2020 election results. Pence rightly rejected the plan as unconstitutional. But it cannot be assumed that others in the same position in the future will act accordingly.

Finally, both the ECRA and the PERA would also create a deadline and a duty for one state official—in the case of the ECRA, “the executive of each State” (typically the governor), and in the PERA, the governor explicitly—to certify the selection of the state’s electors. Even more, it would make that governor’s certificate “conclusive” in Congress on January 6.

The main thrust of this reform stems from mounting concerns that a bad-faith election denier governor might refuse to certify the electors. But this proposal would also attempt to put the brakes on future efforts to create rival slates of electors keying off schemes in 2020 to establish so-called alternative Trump electoral college slates. Since the bills make the governor’s certificate “conclusive,” false alternative electors would most likely be fruitless.

The two bills also anticipate one more twist that a bad-faith governor could try to pull off. What if the state’s executive submits a certificate designating the electors that flies in the face of the popular vote? Both the ECRA and the PERA create an expedited judicial-review process to review and, if appropriate, overturn the bad-faith governor’s selection.

The Senate’s ECRA creates a rapid federal judicial process to review a governor’s certificate (or lack of one). That process can be as short as six days. It can be longer than that if a governor issues his or her certificate before the statutory deadline. But in our current political and legal environment, governors may be tempted to stall to the deadline in order to achieve partisan or other improper advantages. Even good-faith governors may be pushed to the last minute by post-election exigencies.

So, we should assume that the six-day review process is a likely scenario. There is no room for error in that kind of a timeframe. Those seeking to protect legitimate outcomes will have to bat 1.000 in that period, while election deniers will only have to eke out a few wins for the clock to run and chaos to ensue.

Some defend the six-day process, arguing that much of the litigation will have already been underway and that any issues will have been well aired and thoroughly briefed beforehand. They are probably right—most of the time. But they may be underestimating the determination of election deniers who unleashed a tidal wave of litigation in 2020. The movement has gathered steam, and the next election could see even more.

The House’s PERA provides a better model for this review timeline. It would provide five days minimum for a federal district court’s review, and then an additional three days minimum for the Supreme Court to review on appeal. While this timeline is still rather compressed, it is at least better than the six-day minimum allotted by the ECRA for both the district court’s review and any appeal.

The ECRA also includes the ability of a state court to supersede a governor’s certificate.

State court review of a governor’s certificate is entirely appropriate. But the ECRA allows for the possibility that state judges, for example one in a county trial court, could end up having the final say on the appointment of the state’s presidential electors without the state’s supreme court explicitly being given any opportunity for review.

That is because the ECRA allows a move by any of these judges to “require[]” a governor to issue or revise a certificate of ascertainment. In the event that one of these governor-related disputes lands before a trial court judge that has been influenced by partisan or special interests, that judge could have the opportunity to sabotage the judicial review process. They could, for example, drag out their review and issue a last-minute order at the end of the six-day period possibly leaving no time for appeal to the state’s higher courts.

Strategic election deniers will have no shortage of county-level judges to go to seeking orders to upend a good-faith governor’s certificate. In Ohio, 244 judges sit in county courts of common pleas with jurisdiction over election boards. In Pennsylvania’s court system, 459 judges serve at the county level courts. As a matter of simple statistics, it is not improbable that a trial court judge with election-denier sympathies might serve on one of these courts. (It is also possible that a hyper-partisan judge from the left could also act inappropriately.) Indeed, the partisanship of lower state courts has long been the subject of scrutiny by legal scholars. Many state court judicial-selection processes are prone to excesses of partisanship or to allowing other special interests to seep in.

To remedy this potential issue, the judicial-review provisions in the ECRA should require that a state court’s order to supersede or revise a governor’s certificate must come from the highest court in the state. It is not uncommon for Congress to impose this sort of a requirement.[1] The benefit of doing so here is substantial.

The House PERA seems less problematic in this regard. It does not codify that a state court order regarding a certificate “shall replace and supersede” the governor’s certificate during the six-day period. Moreover, to the extent such a state court does issue a decision about electors, the PERA would not appear to give it weight unless it is a “final determination,” which may be understood as requiring review by a state’s highest court.

Legislators should be hyper-vigilant to the threat of election denial. Reforming the ECA is part of that. The bills passed by both houses of Congress represent forward progress. It is to be hoped that final bicameral negotiations will resolve the last issues that remain.

What are the worst airports to fly into during winter?

Perpetua Resources Receives Critical Minerals Award of up to $24.8 million under the Defense...