Authentic fry bread, traditional dancing and attire, and the reality of the “invisible community” were the center of conversation during the Center for Race, Ethnicity and Diversity Education’s (CREDE) Native American Heritage Month keynote presentation on Nov. 2.

Jennifer Revels Baxter, president of the Guilford Native American Association (GNAA), delivered the keynote address and displayed an opening slide that read, “We are still here.” North Carolina has a large presence of Native Americans with eight state-recognized tribes, including Baxter’s Lumbee Tribe. “In many ways, we are viewed as something in the past,” she said. 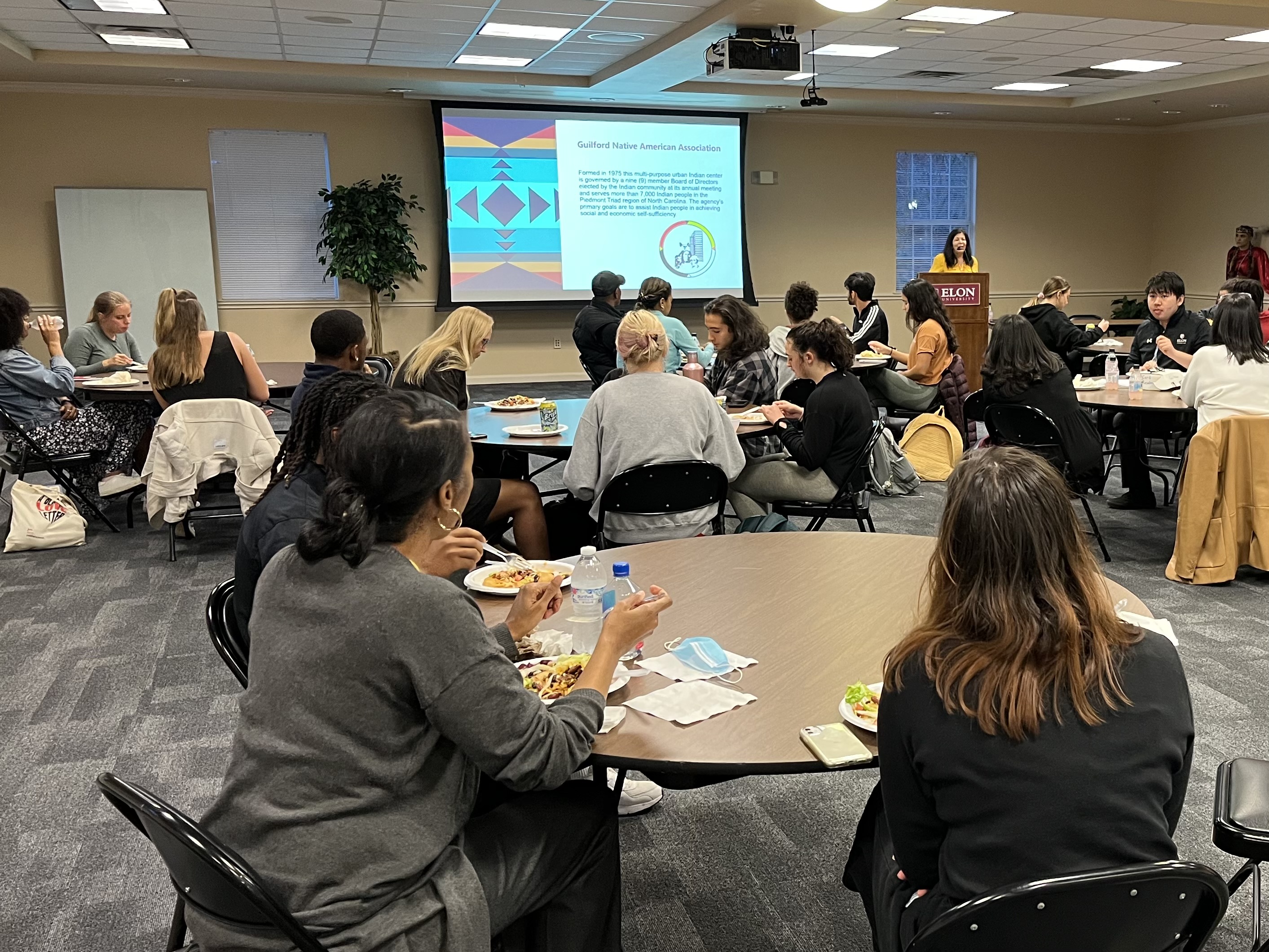 Also, she raised concerns about missing and murdered indigenous women, cultural appropriation and negative stereotypes. She implored about 35 students, faculty and staff to help bring awareness and change.

Rachel Dietert ‘23, president of Elon’s Native American Student Association, shared Baxter’s charge for other communities to assist in raising the issue of the Native community. “Our community is not growing at the same rate as other races,” she said. “To have our issues prioritized we need to have the support of communities.”

Dietert’s tribal affiliation is Cherokee. Being from Houston and due to her appearance, Dietert encountered hardship embracing her heritage. “I grew up learning about my grandma attending a Native American Boarding School and carrying my tribal enrollment card,” she said. Still, others questioned if she was Cherokee. “Looking Native was put onto us by colonialism,” Diatert continued. “I am not identifying as this for fun. It’s really a part of who I am.”

Baxter leading the GNAA isn’t random. She is the daughter of Lonnie Revels and Ruth Revels, both popular Greensboro activists. Ruth served as the first director of the GNAA, and Lonnie was a two-time city councilperson.

Former Miss North Carolina Native American, Raven Dial-Stanley performed a traditional Native American dance and taught the group one. She wore a jingle dress, which is regalia worn during different ceremonies, such as a Pow Wow. Befittingly, the event ended with the entire group holding hands in a circle, connected and embracing each other. Dancing from side to side, and then a rush into the middle with a loud yell in celebration of one another. Baxter said, “When we hold hands in this circle there isn’t someone that is first or last, we are all one.”

Jon Gosselin Is ‘So Proud’ Of Collin For Kate Revelations