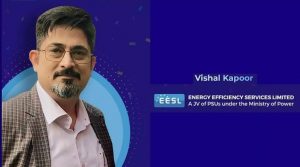 Energy Efficiency Services Limited (EESL) has announced the appointment of Vishal Kapoor as its chief executive officer (CEO). He takes charge after completing his tenure as the joint secretary at the Ministry of Power. As joint secretary, he led various government interventions, schemes, and reforms in the distribution sector. He also spearheaded cyber security and IT initiatives in the power sector. He played an instrumental role in formulating the Revamped Distribution Sector Scheme for the Operational and Financial turnaround of distribution utilities.

Kapoor worked with the India Railways in various capacities in design, operations and maintenance of the Rolling Stock of Indian Railways. He introduced the high-capacity car carrying freight cars in India and exported of more than a dozen locomotives to Tanzania and Myanmar.

Kapoor graduated with a degree in Mechanical Engineering from the Indian Railways Institute of Mechanical & Electrical Engineering (IRIMEE). He holds a Master’s degree from National University of Singapore. He has also pursued the Advanced Management Program in Public Policy from Indian School of Business.

tWitch, Allison Holker Considered Having More Kids Before His Death

2022 in review: Russia war to COP27, top events that shaped the world

How Did the ‘Last of Us’ Outbreak Start? Disease Origin