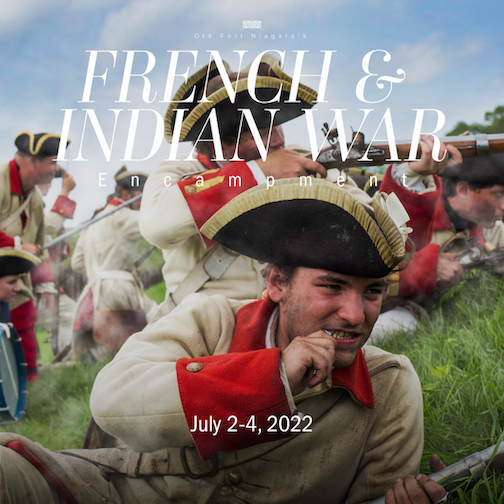 Old Fort Niagara will host its annual “French and Indian War Encampment” from July 2-4. The event is the historic site’s largest of the year, welcoming more than 400 reenactors and dozens of period merchants and artisans.

The event begins as recreated military units, period merchants and artisans erect a large tent city on the fort’s grounds. Through the course of the three-day event, participants will reenact four battles, fire cannons and muskets, engage in frontier diplomacy, and present military pageantry with fifes, drums and banners.

OFN stated, “Although largely forgotten, the French and Indian War was George Washington’s first military command, and the first time large European armies fought on American soil. Native Americans fought on both sides and often influenced the outcome of military campaigns. When the war was over in 1763, half a continent changed hands, and the stage was set for the American Revolution.

“Fort Niagara began the war as a French outpost. Constructed in 1726, the fort remained in French hands until the fifth year of the French and Indian War. Because the fort guarded the strategic Great Lakes water route to the west, the British set their sights on capturing the fort in 1759. A British expedition, mustered near Schenectady, advanced across New York during June. By July 6, 2,500 British and New York soldiers and almost 1,000 Haudenosaunee allies landed where Four Mile Creek State Park stands today.

“After setting up camp east of the fort, British forces proceeded to lay siege to the strongly fortified French outpost. They accomplished this by digging a zigzag trench toward the fort. As the trench moved forward, the British moved their cannons ever closer to the fort’s walls. Defenders held out against great odds for 19 days, exchanging musket and artillery fire with the attackers.

“On July 24, a French relief column, marching from what is now northwestern Pennsylvania, tried to break through to the fort, only to be defeated just a mile from the fort at a place called La belle Famille (“The Beautiful Family”). Although no one knows for certain how this location got its name, the site is now known as the Village of Youngstown, New York.

“With the fort’s wall breached by cannon fire, and the French relief force defeated, the fort’s commander, Capt. Pierre Pouchot, sued for terms of surrender. Fort Niagara’s capture was the first of three major British victories that led to the fall of New France and a British takeover of Canada and the Great Lakes.”

Old Fort Niagara recreates the drama of the historic Siege of 1759 with a full weekend of living history programs. Hours are 9 a.m. to 5 p.m. each day. More information is available by calling 716-745-7611 or by visiting www.oldfortniagara.org.

So much more than a pickup truck – The North State Journal

Does Rebecca Pearson Die in ‘This Is Us’ Final Season? Spoilers

How to Save the Postwar Order