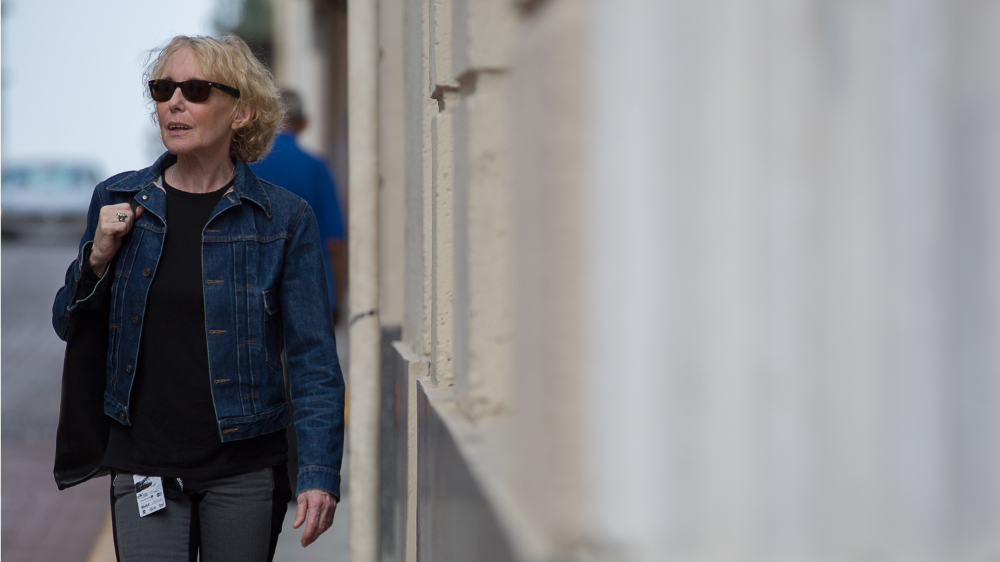 In Panama to shoot “The Stars at Noon,” French auteur Claire Denis (“Beau Travail,” “High Life”) spoke at an IFF Panama fest panel about shooting the film in Panama and her hallmark “instinctive” filmmaking.

With her were her two male actors, lead Joe Alwyn (“The Favorite”) and rising Panamanian thesp and former wrestler Nick Romano (“Kimura”), who plays a key secondary role. The panel was moderated by IFF Panama festival director Pituka Ortega Heilbron.

Based on the eponymous novel by Denis Johnson, “The Stars at Noon” is set in 1984 Nicaragua during the Sandinista-led revolution as it relates the unlikely romance between an enigmatic Englishman (Alwyn) and a willful American journalist, played by Margaret Qualley who’s just received great reviews for her performance in Netflix series “The Maid.” The two lovers are soon caught up in a perilous web of lies and conspiracies and forced to flee the country.

Qualley, who was supposed to be at the panel, was at her hotel resting, mentally and physically drained by her intense role.

In response to Ortega’s comment on how Denis’ instinctive filmmaking style has been likened to improvisational jazz, Denis reflected: “Each film is like a new territory, it’s good to get lost and choose a path along the way…. It helps me not to be afraid and it gives me more possibilities to find a way.”

Alwyn concurred: “Because Claire’s directing style is so instinctive, one has to give in to it organically.” “Her set is unlike any other I’ve been on,” he added.

Romano expressed his gratitude for being cast. “I’ve never felt so empowered, and thank her for trusting me. “I would have mopped the floor in a Claire Denis film,” he quipped, noting how she was ecstatic when he would suggest a new approach to a scene he was playing.

“Casting is a strange process, it’s often a throw of the dice,” said Denis. “But sometimes you know upon meeting an actor for the first time, you just know, there’s an immediate trust [established],” she added.

Commenting on the challenges of filming in Panama where the heat, the humidity and sudden torrential rains could be taxing at the best of times, Denis noted: “To work in certain weather conditions is not easy but there’s a joy in sharing these moments.” She also expressed delight at the mix of cultures and nationalities among her cast and crew.

“Panama seems so fragile on the map, situated between two continents… there’s still so much to discover,” she observed.

Speaking to Variety, Denis said she had read Johnson’s novel some 10 years ago and saw it more as a love story between two people who would not have met were it not for the revolution. “It’s also about the fear and the terror of love, the fear of failure,” she reflected.

“I wanted to shoot it in Nicaragua but when President Daniel Ortega came back into power, I knew I could not, it would have been immoral,” she asserted.

Having been a guest of the Panama Int’l film fest seven years ago, and having returned several times to location scout made Panama an easy choice, noted Denis who still has two and a half weeks to shoot in the country.
Asked if she saw a thru-line among her films, Denis hesitated. “I guess it’s my sensitivity to things? Maybe that’s for someone else to see,” she said. For certain, having lived in various African countries as a child has profoundly colored her worldview.

To wit, her acclaimed feature debut, Cameroon-set “Chocolat,” is a semi-autobiographical film about living her formative years in colonial French Africa, where her father was a civil servant. “Your childhood always stays with you,” she mused.

The Important Elements of Digital Change

Graham: McConnell Needs To Have ‘Working Relationship’ with Trump to Remain Celebration Leader

Mark Hoppus Says When He Was Diagnosed With Cancer He Felt Like He “Was...