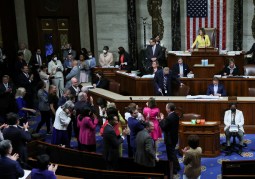 With the midterms months away, lawmakers may view Democrats’ reconciliation bill as the last major landmark of the surprisingly productive 117th Congress. But areas for bipartisan cooperation remain, including one with the potential to effect salutary and wide-reaching changes in congressional ethics and representation: a stockholding ban for members of Congress. For such a measure could reduce harmful conflicts of interest among elected officials, increase public trust in the legislative branch, and, in the long term, perhaps produce a Congress that is more socioeconomically reflective of the American people.

Traditionally, arguments in favor of a ban on congressional stockholding contend that stock ownership by elected officials presents an insurmountable conflict of interest. Members of Congress control the U.S. government’s purse strings, writing and voting on bills that may benefit or disadvantage specific industries and the companies that comprise them. The ability to shape the U.S. economy using the financial heft of the federal government perpetually tempts lawmakers to steer government policy to benefit their investments.

When those decisions cut against the interests of members’ constituents, they call one of the central promises of representative democracy into question: substantive representation. That term refers to a governing philosophy whereby elected officials vote in line with their constituents’ wants and beliefs even at the expense of their personal interests. That could include a House member with a district that skews older prioritizing a bill that lowers the cost of prescription drugs, even if that representative suffers a hit to their investments in a pharmaceutical giant whose stock price may fall with the bill’s passage. Or a senator representing a state with significant wind power potential voting for legislation that directs government funds to renewable power despite their owning stock in the fossil fuel industry.

Substantive representation may seem axiomatic in a representative democracy. Legislative votes are on the record, and members of Congress are ultimately accountable to their constituents via the ballot box. But a troubling series of studies raises the question of whether members may put their stockholdings ahead of their duties to their constituents.

We refer to the body of scholarship that suggests that members of Congress frequently vote with their stock portfolios in mind. Take, for example, the passage of two consequential economy-focused bills: the 1999 Financial Services Modernization Act and the 2008 Auto Industry Financing and Restructuring Act. In both instances, members of Congress who owned stock in the companies that would benefit from the bills’ passage—Citigroup and three major American automakers—were more likely to support the legislation.

The evidence that stockholdings help to predict how lawmakers will vote does not stop there. Members’ general stock exposure has been shown to predict their voting behavior on financial policies. And those representatives with greater exposure—those who had more money in the stock market relative to their colleagues—were even more likely to vote for bills that would benefit their portfolios. Members also change their voting behavior on financial matters in election years, taking self-serving votes when not facing voters but recalibrating their voting tendencies to appear more attuned to constituent interests in advance of reelection bids.

That is not to say that the evidence is conclusive. A representative may genuinely believe that any given vote actually benefits their constituents and advances substantive representation. A member holding financial stocks and supporting a bill to benefit the financial industry may point to the benefits that industry offers to their district. The same could be said of votes advantaging pharmaceuticals, the automotive industry, and so forth. But these studies and the voting patterns they describe are, at a minimum, in tension with the ethics of substantive representation in a healthy democracy. And these patterns often create the appearance of a conflict of interest, which can be equally as corrosive as the conflicts themselves for public faith in neutral and public-focused policymaking.

The bottom line is that experts and activists have thus understandably focused on an ownership ban as a solution to the actual or apparent conflicts of interest at the core of these issues. A ban could be transformative in that regard alone. But it also has the potential to engender wider changes in Congress and, by extension, in American democracy.

A less-discussed benefit of a stockholding ban: greater “descriptive representation”

Most of those who endorse a stockholding ban focus on the ways in which such a measure would reduce conflicts of interest and strengthen congressional ethics. But beyond that, a ban could improve of the state of substantive representation’s sibling: descriptive representation. That term refers to the supposition that elected officials should be demographically representative of their constituents. That representation can be conceptualized along axes of race, gender, sexual orientation, and so on.

Descriptive representation has been increasing in Congress for years, but the progress is uneven. While Congress has become more diverse in terms of gender and race with each recent election, the socioeconomic standing of its average legislator has not. Analyses in recent years have pegged the median net worth of a member of Congress at upwards of $500,000, more than five times the median household income of an American family.

Katy Perry Loves To ‘Doom Scroll’ Next To Orlando Bloom

In 2020, the majority of Congress’s 535 members were millionaires, compared to eight percent of the U.S. population.

And while stock ownership is not a direct stand-in for overall wealth, stock ownership by members of Congress also outpaces that of the average American. As recently as 2011, 92 percent of congresspersons owned some form of stock, compared to 54 percent of the American public (with the vast majority of circulating shares owned by the wealthy). That leaves middle- and working-class Americans underrepresented in Congress.

A stockholding ban could indirectly close that gap, boosting socioeconomic descriptive representation and ensuring wealthy candidates who do choose to run for office are willing to put the public before financial gain. With the affluent harboring much of their wealth in stocks, legislation barring the possession of such assets while in Congress would give candidates a binary choice between retaining those investments and holding federal office. That might dissuade some deep-pocketed candidates from choosing to run and make more room for aspirants of average means.

Rather than punishing the wealthy for their assets and unfairly excluding them from Congress, an ownership ban would merely select for patriotic congressional candidates who hold public service in higher regard than their stock portfolios; that fewer of the ultrawealthy might advance to Congress when forced to make that choice would simply be a result of the overrepresentation of the wealthy among those Americans who own stock and thus see divestiture as a non-starter to mounting a congressional bid.

Certainly, some wealthy individuals would and do forgo their stock options to serve their country. The experience of the executive branch is instructive in that regard. One of the authors (Eisen) helped review the finances of hundreds of applicants for cabinet, White House, and other senior executive branch positions as the Obama administration’s ethics czar. Some of these individuals rejected the strictures of the conflict-of-interest disclosure law for executive branch officials (from which Congress exempted itself in 1962). But many others were willing to make those sacrifices, including, for example, the extensive divestitures that were sometimes required of them in order to assume their executive branch roles.

When coupled with measures like increased public funding to make running for office more accessible to average Americans and campaign finance reform that empowers small donors over dark-money groups, a stockholding ban could act as one of the means by which the socioeconomic balance of Congress comes to better reflect that of the nation. Descriptive representation would see a boost, and to the extent that a representative’s socioeconomic background influences how they vote on issues important to working-class people, Congress might come to more clearly mirror the interests of all Americans.

The long-term equalizing and conflict-busting effects of a stockholding ban might also help resuscitate the public’s perception of Congress, which is dismal. The institution often ranks last among the three branches of government in public approval ratings. As of this year, only seven percent of Americans have a “great deal” or “quite a lot” of confidence in Congress, an all-time low. The reasons for this distrust are undoubtedly many, but impressions of Congress as out of touch (including nearly half of respondents who see their own representative as so), as guided more by special interests than by their constituents’, and as corrupt certainly do not help the body’s negative standing among the public.

A stockholding ban could convey to the public that Congress is willing to take action in response to these views. Such a law is overwhelmingly popular among the electorate. And at a time of great societal anxiety about the economy in the wake of a public health crisis during which America’s wealth gap only widened, Americans might feel more positive about Congress if they believed its members faced financial realities similar to theirs and legislated accordingly, without any whiff of personal financial considerations possibly influencing their judgment.