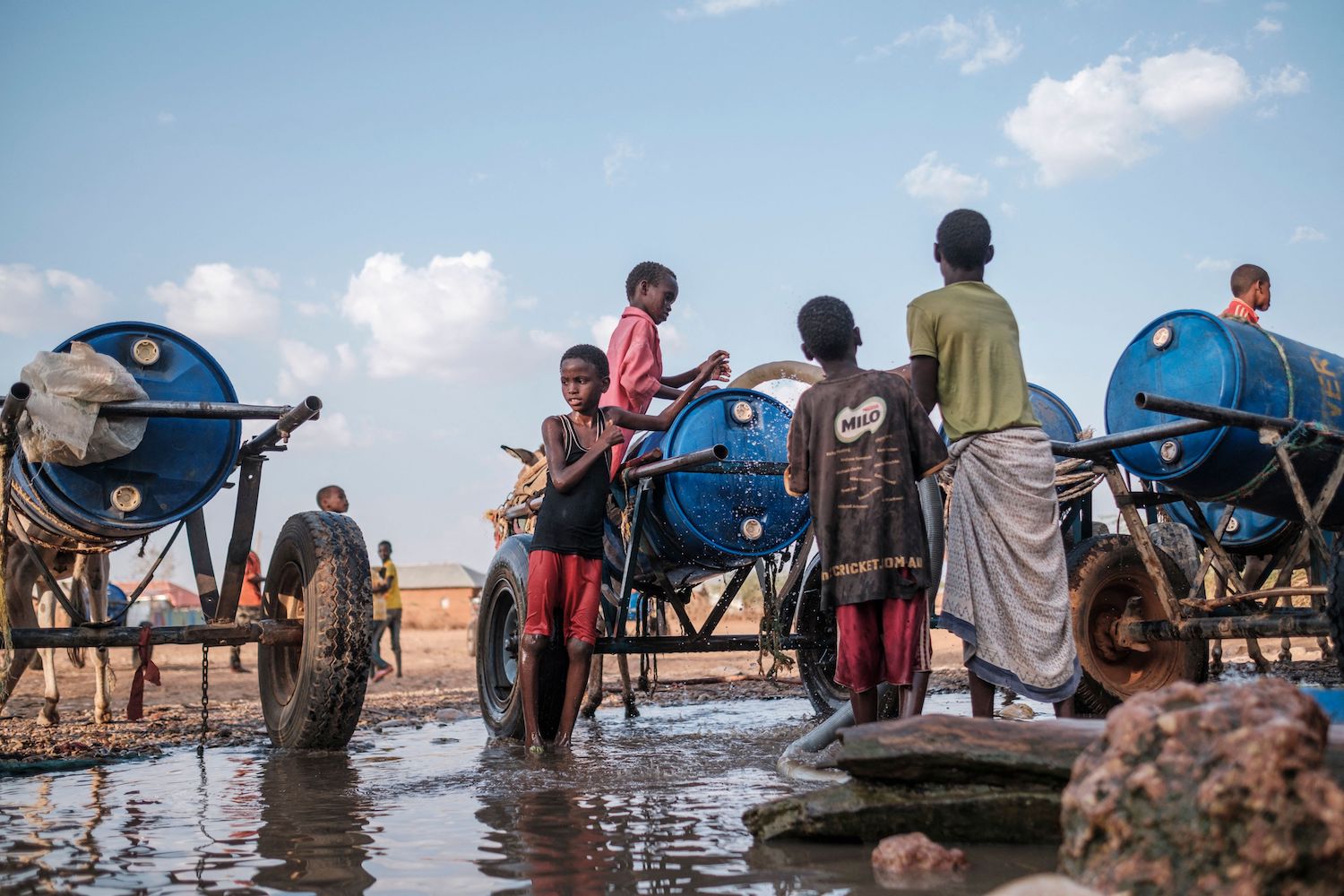 Welcome to today’s Morning Brief, where we’re looking at the link between climate change and hunger, the state of Sweden and Finland’s NATO applications, and North Korea’s COVID-19 disaster.

The Link Between Climate Change and Hunger Crises

Welcome to today’s Morning Brief, where we’re looking at the link between climate change and hunger, the state of Sweden and Finland’s NATO applications, and North Korea’s COVID-19 disaster.

The Link Between Climate Change and Hunger Crises

As global emissions continue to surge, setting the world on a course to barrel past critical climate targets, the planet is rapidly becoming a place of brutal extremes—one of record heat waves, torrential rain, and searing droughts.

It’s a troubling prospect, one that is especially catastrophic for already vulnerable populations around the world. Climate change is a leading cause of hunger, second only to conflict, according to the World Food Programme, and the deepening climate crisis threatens to plunge millions more people into food insecurity.

With climate change, extreme weather events like drought have become more frequent and intense. The vast majority of the people facing hunger—roughly 80 percent—reside in regions that are susceptible to these climate extremes, which can then impact food production, availability, and accessibility.

Take East Africa, where climate change has helped fuel a devastating drought that has ravaged populations already strained by the pandemic’s aftershocks and prolonged conflict. The result has been dire: An estimated three million livestock have been killed while harvests have been destroyed. Every 48 seconds, a person is estimated to be dying of starvation in Ethiopia, Somalia, and Kenya, according to a new report by Oxfam and Save the Children.

“This is the worst drought that these countries have faced in 40 years,” said Lia Lindsey, a senior humanitarian policy advisor at Oxfam America. “As we see greenhouse emissions increasing, we’re seeing the severity of extreme weather events, like drought in this area, increase not only in frequency, but also in severity.”

If nothing is done, aid agencies warn, these populations could soon face widespread famine. Across Somalia, Kenya, and Ethiopia, over 23 million people are currently confronting acute hunger; half a million people are living under famine-like conditions. “The worst case scenario is really, severely concerning,” said Lindsey.

South Asia has also been living through its own climate nightmare, as the region struggles to cope with a blistering heat wave that has forced school closures and blackouts. It will likely only be a preview of what is yet to come: With climate change,  intense heatwaves in Pakistan and India are now 100 times more likely to occur, according to a new study.

As these climate impacts become more pronounced, the implications for global hunger will be enormous. By 2030, the number of people in India at risk of hunger could spike by 23 percent because of the climate crisis, according to a new report by the International Food Policy Research Institute. Around the world, the report said, there would be roughly 70 million more people at risk than there would be without climate change.

“There’s no sign of it abating whatsoever,” said Lindsey, the Oxfam policy advisor. “The communities that we accompany are seeing more severe weather events that are causing incredible harm to individuals.”

Nordic NATO troubles. After officially applying for NATO membership on Wednesday, Finland and Sweden found their efforts stymied by Turkish President Recep Tayyip Erdogan, who said they were resisting extraditing 30 individuals that are considered to be terrorists in Turkey. “You won’t hand over terrorists but you want to join NATO,” he said. “We cannot say yes to a security organization that is devoid of security.”

Since all NATO members must agree to allow a new member to enter, Erdogan’s opposition is a blow to any hopes for a swift accession into the alliance. Later on Wednesday, Croatian President Zoran Milanovic also suggested that Croatia could follow Turkey’s lead, demanding changes to electoral laws in Bosnia-Hercegovina; Croatia’s prime minister and foreign minister criticized the president’s outburst.

North Korea’s COVID-19 freefall. North Korea is now in the throes of a spiraling COVID-19 disaster, after declining millions of vaccine doses for months. Just a week ago, Pyongyang officially recorded its first COVID-19 case; the country could now be facing as many as one million infections, according to state media.

Pyongyang is now facing twin crises, as Ankit Panda writes in Foreign Policy. Beyond dealing with an alarming outbreak, the country may also be teetering on the brink of a famine.

Has the world had enough of Russian President Vladimir Putin’s games when it comes to gas and oil dominance? Will OPEC continue to undercut the United States? What is the U.S. role within the current energy landscape?

Spying charges. Four Chinese intelligence officials and a U.S. citizen have been charged over a transnational repression and espionage plot, according to a recently unsealed indictment. The five were involved in a scheme to spy and collect information on activists and dissidents, the court documents said.

“If anyone doubts how serious the Chinese government is about silencing its critics, this case should eliminate any uncertainty,” said Alan E. Kohler Jr., the acting executive assistant director of the FBI’s national security branch.

After purchasing a cup of espresso at an Italian coffee bar, one man was so upset by the price that he called the police, the Guardian reported. In Italy, an average cup of espresso typically goes for 1 euro, although prices have risen slightly this year; this coffee bar charged 2 euros. The man told authorities that the store neglected to list the price on the menu by its counter—a failure that resulted in a hefty shop fine of 1,000 euros. (The store provided the coffee’s price on its digital menu, the shop owner said.)

Francesco Sanapo, the shop owner, was outraged—mentioning that his coffee beans come from a small plantation in Mexico. “They fined me because somebody got offended for paying 2 euros for a decaffeinated coffee [which involves a water extraction process],” he said in a video after. “Can you believe it?”

The Museum of Jewish Heritage Needs to Remember Its Own Mission