When a gunman approached two men outside a Waukegan restaurant Sunday and shot both in the head, killing one and gravely injuring the other in apparent retaliation for an earlier shooting, it became the sixth gun-related homicide in Lake County this year, twice as many as at this point in 2021.

For Lake County State’s Attorney Eric Rinehart, it also drove home the need for the kind of program his office will help launch today.

The Gun Violence Prevention Initiative will aim to reduce shootings in the county by linking people at risk of committing violence with services such as career counseling, mental health treatment, GED classes and, perhaps most importantly, credible mentors known as “violence interrupters,” who will help steer them toward another path.

“This will essentially saturate at-risk youth and at-risk individuals with services and with community connectivity, to attempt to get them the services that they may need prior to them ever picking up a gun,” Rinehart told us Thursday. “This is a plan designed to reach people before the shooting starts.”

The program will launch with $500,000 from the federal American Rescue Plan, via the county board, and another $500,000 from the state. Rinehart said his office is working to secure federal grants to fund it beyond that initial investment.

Rinehart said that for about the past seven years, Lake County has had the highest homicide rate among the collar counties, and many of those killings involve firearms. Many more shootings have left victims permanently scarred.

“Obviously, we have an enormous problem with gun violence,” he said.

When he took office in 2020, Rinehart said he wanted to seek harsher sentences for those convicted of gun-related offenses but also find ways to prevent those crimes from occurring in the first place.

“This is an investment in prevention, not some new way to not prosecute shooters,” he stressed.

To operate the program, the state’s attorney’s office will partner with community-based organizations, which will hire the violence interrupters and manage their work. Part of the launch will be issuing a request for proposals from organizations interested in taking part.

Before going out into the community, the violence interrupters will undergo training with, among others, Marcus McAllister, a former gang member who’s become a nationally recognized expert in reducing street violence. Rinehart expects the interrupters to be residents known within the communities they serve, and perhaps even people who were once on the wrong path.

After training, the interrupters will go out into the communities to meet at-risk individuals, Rinehart said. They’ll also take suggestions of individuals they should reach out to from local police departments, schools, probation officers and others.

“We cannot expect these at-risk individuals to walk into the state’s attorney’s office,” Rinehart said. “We need to meet them where they are, whether on the street corners or knocking on their door, because they’ve been identified.”

How will he know if it’s working?

Rinehart said the initial goal is for program workers to make 1,000 contacts in its first year, and get 75 of them enrolled as long-term clients.

Further along, its success will be judged by whether it helps reduce gun violence.

“This takes time, and I don’t want anybody to think that this is like a magic pill where we’re going to knock on the door and solve all these problems,” he said. “It takes time to have credibility in the community. And so this is a long, drawn-out process to tackle the gun violence problem that we’re seeing in my county.”

Mowing down more than crime

On Monday, officers on the afternoon shift were called to a home in the northeast part of the village to check on an elderly resident who had not been seen or heard from by neighbors for almost a week, according to a post on the department’s Facebook page. 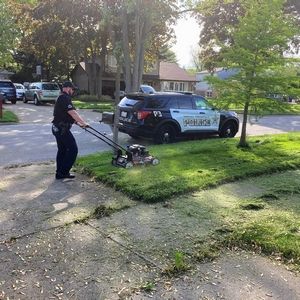 Mount Prospect police officer Brent Murray joined a pair of fellow officers in helping out an elderly resident this week whose landscaper hadn’t shown up to mow her lawn, drawing complaints about her long grass to village hall.
– Courtesy of Mount Prospect Police Department

Neighbors also noted that the grass at her home was long and hadn’t been cut for some time.

Officers were able to contact the resident and found her to be OK, police said. But while speaking with her, they learned that her lawn care contractor hasn’t shown up to mow the grass and the village has received complaints about it.

So, officers Brent Murray, Nicholas Bolin and Joseph Gliner jumped into action and cut the lawn.

Elburn residents may spot officer Aldo Scudiero practicing his drone piloting skills in local fields and parks, now that the department has its own drone. It was bought with the help of a grant from the Kane County DUI Task Force.

Scudiero will use the drone to help reconstruct crash scenes, search for missing people, and at crime scenes.

The DuPage County chapter of the National Alliance on Mental Illness gave its Community Partnership Award May 7 to the 18th Judicial Circuit (DuPage County) specialty drug, mental health and veterans courts, at its May 7 Shine the Light party.

The specialty courts work with nonviolent offenders who have mental illnesses and co-occurring disorders.

The award is for the courts’ “enhancement of the quality of life for participants and for their leadership in establishing a new vision of justice that benefits us all.”

The courts have goals of rehabilitating offenders, and restorative justice, using specific practices designed to break the cycle of arrest and recidivism for people who have mental health issues and drug addiction.

• Do you have a tip or a comment? Email us at [email protected]

How to Take Sexy Selfies