While the spotlight is often shone on large-scale state and federal efforts to affect climate change, Chicago’s suburbs also are making changes to move toward zero emissions at the local level.

Municipal efforts to prepare for a transition away from fossil fuels and toward clean energy have been ramping up over the last five years, with priorities on electric-vehicle infrastructure, stronger building codes and energy alternatives such as solar power.

“That term ‘transition’ is often defined differently, depending on the communities you talk about,” Mayor Kevin Burns of Geneva said. “Some communities have a trajectory that’s pretty quick. For others it’s a couple of decades out altogether — but we know where we’re going. We know ultimately where we will be and where we want to be.”

Burns leads the Environment Committee of the Metropolitan Mayors Caucus, a membership organization of 275 cities, towns and villages that developed a Climate Action Plan for the Chicago area last year. It’s one of the first regional climate plans in the nation.

In order to plan locally and take action from there, municipalities can tailor ideas and other caucus resources to their own communities, said Brian Tomkins, a project manager with the organization. 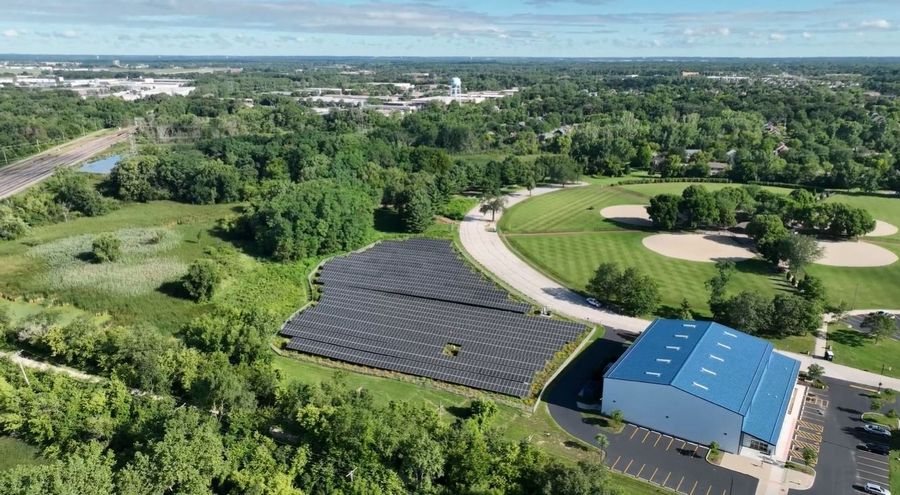 One area where Tomkins said he has seen local interest grow is electric vehicle infrastructure.

In 2019, the caucus partnered with ComEd to create an EV Readiness Program to give towns and cities guidance on actions like developing zoning and planning policies, permitting processes, and inspection and safety procedures.

“We have discovered that many more people are using these EVs, and we have no place for them to charge. We’re missing the boat, as you will,” Burns said. “All these communities are looking at opportunities to service those consumers in a respectful, responsible and affordable way.”

Most recently, the caucus and ComEd awarded 21 grants totaling $171,000 for community infrastructure projects that promote public safety — 13 of which are for EV charging stations.

“This isn’t a surprise when we think about climate change and what our communities are focused on. We’re seeing a trend in projects that are overwhelmingly EV charging-centric,” said Keisha Parker, vice president of external affairs at ComEd. “We know that that’s the need.”

The grant program, titled “Powering Safe Communities,” is in its eighth year and has funded public safety initiatives ranging from purchasing speed advisory signs to thermal imaging cameras that help locate victims trapped in a fire.

Communities themselves identify the projects that need funding. Just three years ago, there wasn’t a single EV-related project funded by the program.

“What we’re seeing is this evolution,” Parker said. “The Powering Safe Communities program is intended for enhancing public safety and quality of life. We’re now seeing our communities react to that definition and their needs for quality of life in a different way.”

A full list of this year’s grant recipients, along with the project descriptions, can be found at tinyurl.com/PSCGrants2022. Despite being a shared priority, the transition to clean energy will look different across the Chicago region’s municipalities, Burns said, covering a range of alternative power portfolios.

In Naperville, community rebate programs have spurred progress in one of those alternatives: solar arrays.

The city’s Renewable Energy Program offers residents solar installation rebates from $1,000 to $3,000, depending on the size of the system. For nonresidential installations, rebates are capped at $50,000.

Ben Mjolsness, Naperville’s sustainability coordinator, said when the program kicked off in 2014, it helped fund 23 solar projects. As of 2021, it has funded 530 arrays, both residential and nonresidential.

“Many residents and businesses choose to contribute because they simply believe in supporting the transition to renewable energy,” Mjolsness said. “Beyond accessing financial incentives, there is also the personal belief in the power of clean energy.”

Naperville itself has also installed solar arrays at four of its municipal buildings, and it recently awarded a contract for the installation of three solar projects on three of the city’s electric substations.

In 2019, the city was recognized at Argonne National Laboratory in DuPage County for earning a “SolSmart Silver Designation.”

SolSmart, a designation program funded by the federal Department of Energy, “recognizes cities, counties and regional organizations for making it faster, easier and more affordable to go solar.” 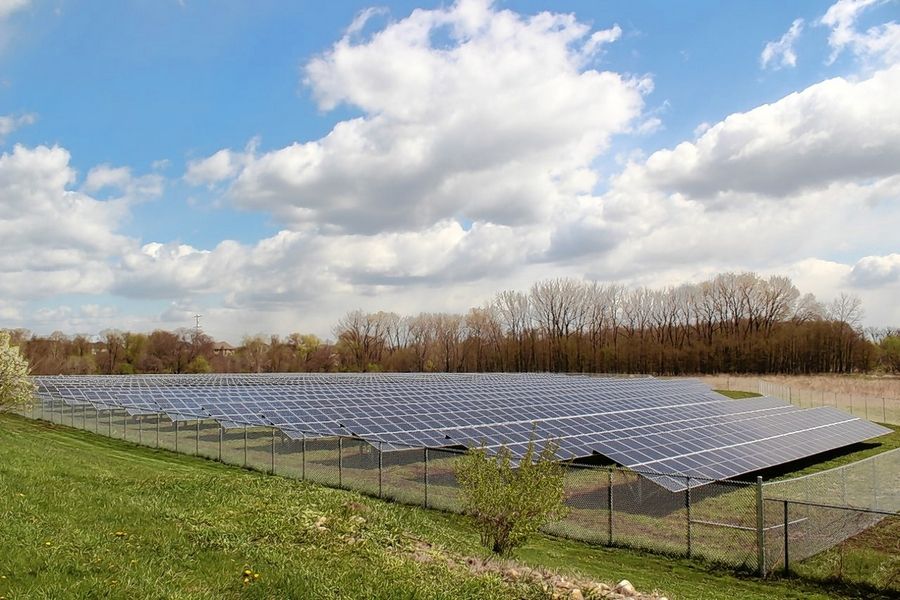 In addition to its solar installation rebate program, Naperville has installed four solar projects, including the array of more than 3,000 panels at the Springbrook Water Treatment Facility. The farm was installed in June 2021.
– Courtesy of City of Naperville

“With regard to energy efficiency, we know factually that the largest percentage of energy consumption in northeastern Illinois is from stationary energy in buildings,” Burns said.

Creating more energy-efficient buildings primarily involved making changes to a municipality’s building code, which establishes the minimum requirements for developments — including parking lots, residential houses and businesses — that each city, town or village sets for its community.

While every municipality is required to adopt the Illinois energy code whenever it’s updated by the state, cities and towns can also choose to adopt the International Energy Conservation Code, which establishes minimum requirements for energy-efficient buildings. Once adopted, municipalities can amend the code to better fit their individual circumstances.

Scott Flanagan, the building official at the village of Schaumburg, said the village is set to adopt the latest version of the international code this December.

While building codes cover a vast range of regulations, changes related to energy will include requiring electric vehicle chargers for at least 4% of parking spaces at new parking garages.

“As you remove old technology out of a building and you put in new technology, you would need to adhere to the current building codes,” Flanagan said. “That’s the way that building codes get buildings improved for energy efficiency. Any time you complete a project on a building, it’s subject to the new code.”

The updated code will recognize solar panel shingles as a new technology, making it easier for developers to install the arrays. It will also require new basements to be insulated rather than left unfinished, adding to the energy conservation of new homes and buildings.

Tomkins added that the ability to adopt more energy-efficient codes varies from town to town. Updating building codes is an extensive process that requires resources, such as having a chief building official, that not every municipality has.

• Jenny Whidden is a Report For America corps member covering climate change and the environment for the Daily Herald. To help support her work with a tax-deductible donation, see www.reportforamerica.org/newsrooms/the-daily-herald-2/.