At the recent hearings before the Senate Judiciary Committee, Sen. Alex Padilla (D-CA) asked Judge Ketanji Brown Jackson about her seemingly “conscious choice” to avoid harmful language in her legal writings to acknowledge the inherent humanity of all people who come before her court, including immigrants.

“Judges are the only branch of government who are required to write our opinions, to explain our decisions,” Judge Jackson responded. “I have long believed, in that capacity, that our clarity and language matters.”

Judge Jackson’s clear understanding of the power of naming in the pursuit of equal justice under the law only further demonstrates the urgent need to confirm her to the United States Supreme Court. 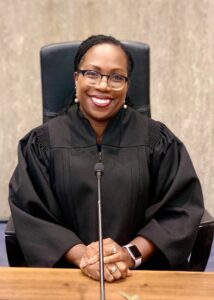 As a federal judge, Judge Jackson has grappled with difficult legal questions with significant impact on immigrant communities. In each of these cases, Judge Jackson did what we would want and expect any good judge to do—weigh the facts of each case with relevant law and precedent to render a decision.

While not all her decisions have been favorable to immigrants, she has consistently and deliberately forgone the use of terms like “illegal” or “alien” when describing immigrants in all her cases. Writing in two separate cases concerning immigration policy, Judge Jackson rejected the dehumanizing terms, which historically appear in statutes and other legal writings, and instead used the terms “undocumented” and “non-citizen.”

Some may not immediately realize the significance of this intentional use of language. But for those of us fighting for immigrant justice, it’s a noteworthy and encouraging shift with consequences that reverberate beyond the courtroom.

Anti-immigrant forces have long weaponized dehumanizing language to advance their political interests. No one in recent history has done so to greater effect than Donald Trump, whose extreme anti-immigrant rhetoric represented the culmination of decades of escalating efforts to scapegoat immigrants, stoke fear, and divide Americans to retain power.

Advocates for immigrants’ rights, in contrast, have worked for years to push lawmakers to drop the use of these de-humanizing terms. These successful efforts have prompted local governments to remove such terms from official documents and sparked debates at federal agencies about doing the same, including the Library of Congress. Within months of taking office, President Biden directed immigration agencies to stop using “illegal alien” in favor of “undocumented non-citizen.”

Advocates have similarly pushed news organizations to rethink their language. In 2013, the Associated Press, whose stylebook is often referenced by other newsrooms, decided to stop using “illegal” to describe a person. And while debates about language continue in newsrooms, other news organizations have made similar editorial decisions.

The truth is that naming does matter. And when it comes to the law, it matters even more.

Throughout history, the Court has influenced American culture and public opinion – for better and worse – through its use of language. Decisions in Dred Scott and Plessy, for example, each used language that dehumanized Black Americans to legitimize and perpetuate the racist and unequal treatment of Black people. Both rulings are now broadly regarded as some of the Court’s gravest errors. But language can also accelerate greater social change, as was the case with Obergefell and the advancement of marriage equality for LGBTQ people. A justice who understands the power of language in the law is a welcome addition to the Court.

As a member of the federal judiciary and potentially of our nation’s highest court, Judge Jackson’s interpretation of the law and her writings will set a framework for future jurists. Her insistent rejection of dehumanizing anti-immigrant terms has major ripple effects beyond the letter of the law. After all, it’s the presence of these terms in our laws that are often cited in other spaces to justify their continued use.

Senators who are truly interested in fulfilling their constitutional duty to vet the Supreme Court nominee’s qualifications should take note. Confirming a justice who understands the power of naming and has consistently recognized the humanity and dignity of all people is not only a welcome addition to the Court, it’s monumental for the advancement of immigrant justice and human rights.

Ukrainians Fight Russian Troops Up Close Along the Eastern Front

4 Things You Should Know About the 2020 Census