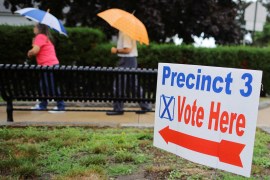 The importance of factions. Ever since the victory of the Republican Party in 1860, American politics has been dominated by two political parties – Republicans and Democrats. And yet this apparent stability masks the fact that American parties have changed enormously over the years as one or the other political party morphs into something else. For instance, the Democratic Party was the party of segregation and Jim Crow after the Civil War and today it is the party of civil rights. The party of Lincoln has now become the party of Trump.

Factions surface in contests for the party’s nominations at all levels of government. Today we see can see factions emerge as primaries unfold and we can gauge their strength by looking at the kinds of candidates who run in primaries and how they perform. Because primaries have traditionally been low turnout events, competing in them is cheaper than contesting a general election.  It is no surprise therefore, that primaries – especially congressional primaries – have become the pre-eminent vehicle for activists seeking to affect their party’s meaning.

Factional politics prior to 2022.[1] In the three congressional primary studies conducted prior to 2022, we coded each congressional candidate according to their position within their party. In 2014 we saw the beginning of the Republican Party’s significant turn to the right as the Tea Party candidates challenged more traditional business minded Republicans. In 2016, the presidential primaries unearthed extensive divisions within each political party. The Democrats saw a resurgence of the left wing of their party under Senator Bernie Sanders and many pundits began to identify it as the Sanders/Warren wing of the party—referring to Massachusetts Senator Elizabeth Warren. On the Republican side, Donald Trump managed to surprise the establishment and win the presidential nomination. The drama in the congressional primaries, however, was not as intense as it was in the presidential primaries.

By 2018 the intra-party factional divides had intensified as mainstream candidates were challenged on the left and on the right. The number of self-identified progressives increased dramatically in 2018, no doubt the result of Bernie Sanders’ desire to keep his revolution going and his strong showing in the Democratic primary two years prior.[2] On the Republican side, the number of business/establishment candidates remained the same; the number of Tea Party candidates dropped but the plurality of candidates identified themselves as conservatives.[3] Thus by 2018 the two parties reflected what has come to be known as “asymmetric” polarization. Among Democrats the establishment and the left were fairly evenly matched but among Republicans there were substantially more conservatives than more traditional business Republicans running in primaries. Nonetheless, the establishment candidates continued to have better win rates than the more extreme candidates in both parties. This finding held even when incumbents were removed (since incumbents have many advantages in primaries besides ideology).

Factions in the 2022 congressional primaries. In 2022 Donald Trump’s influence in the Republican primaries was even more evident than Bernie Sanders’ influence was in the 2018 primaries. In both instances, a defeated presidential candidate sought to keep the movement alive by encouraging like-minded candidates to run in congressional primaries. Conventional wisdom at the end of the 2022 primary season holds that Donald Trump had taken over the Republican Party.

To test Trump’s impact we coded Republican primary candidates into four categories. The first one is composed of candidates who were explicitly endorsed by Trump. (Note, we did not include 2020 endorsements if there were no 2022 endorsements — an important choice given the former president’s penchant for changing his opinion of individuals over even short periods of political time.) The second category included candidates whose website contained an explicit photo and/or a favorable mention of Trump; these were often constructed to give the viewer the idea that Trump had endorsed the candidate when he had not. The third category included candidates whose website contained favorable photos and/or mentions of Make America Great Again, MAGA and/or America First. Candidates in the second and third categories were often Trump “wannabees” – lacking an explicit endorsement but trying to capture support of Trump voters. In some races such as the marquee Senate races in Ohio and Pennsylvania, we saw that candidates attacked each other for not being loyal enough to Trump or they tried to paint themselves as the best example of Trumpism, even when they did not get the formal endorsement. The following table shows the breakdown of Republican candidates:

Table 1. 2022 Republican primary candidates by their attachment to Trump*

**Most of Trump’s endorsements were of incumbent members of Congress. As noted incumbents usually win their primaries. Nonetheless of those races without an incumbent Trump’s win rate is still relatively high at 86.21%

The story from Table 1 is pretty clear – Trump dominated the Republican Party’s congressional primaries – his endorsed candidates almost always won their races. Many of the candidates he did not endorse tried to get some of the Trump magic into their campaigns by featuring Trump and/or MAGA/America First on their website. They did less well than the candidates Trump actually endorsed. Interestingly, nearly 60% of the Republican primary candidates did not mention Trump, MAGA, or America First on their websites at all. Nonetheless, Trump, master of branding, proved the value of his brand in the Republican primaries.

On the Democratic side, the story is very different. Senator Bernie Sanders, famous for saying “we need a revolution,” was a far weaker factional leader in 2022 than Donald Trump. As Table 2 indicates, Sanders and his allies and organizations on the far left endorsed very few congressional candidates. Only half of those won their primaries. We also coded for favorable mentions of specific phrases that have become popular on the left wing of the Democratic Party. Slightly more than a quarter of all Democratic candidates used one of those phrases on their campaign website and about 40% of those candidates won. But perhaps the most important lesson from the 2022 Democratic primaries was that nearly three quarters of all the Democratic candidates stayed away from the far left wing of the Democratic Party – in marked contrast to the Republicans who were trying like heck to wrap themselves in the Trump flag.

In addition to looking at the impact of factional leaders on the primaries we also coded each candidate for where they stood within the party. Here we relied primarily on the candidate’s own self-identification. As Table 3 illustrates, the 2022 Republican primaries reflect the move to the right that began in 2014 with the Tea Party candidates and that accelerated with the triumph of Trump over his party.

The leftward movement on the Democratic side is far less dramatic than the movement to the right on the Republican side, a trend our colleagues Tom Mann and Norm Ornstein have been writing about for much of the 21st century. As Table 4 illustrates, there are still a large number of Mainstream Democrats running in the Democratic primaries, and they do fairly well. In addition, there are a large number of candidates who call themselves progressives and they too do fairly well. In a finding sure to make Republican ad makers unhappy, there are very few Democratic Socialists running in Democratic primaries and they lose more than half their races. Of the 13 candidates using that label only five won, and all of those races were in very Democratic districts where the Cook Political Report rates them above D+20. The revolution appears to be losing steam.

Conclusion. In the past decade each major political party has found itself embroiled in factional wars. But the impact on the parties has been very different. On the Republican side candidates have embraced Trump – even when he has not embraced them – and done very well in the primaries because of it.  On the Democratic side, the impact of Bernie Sanders’ revolution has been smaller, more muted, and less successful in primaries. These facts are often overlooked for two reasons. First, the Republican Party works hard to paint all Democrats as socialists who would wreck our economy, defund the police, and open our borders to everyone. Second is the inclination in the press towards what our colleague and distinguished journalist Marvin Kalb has called the “journalistic curse called bothsideism.”[4] The way this has worked in recent years is to assume symmetry – if the Republican Party is being jerked to the far right; the Democratic Party must be being jerked to the far left. As we’ve seen, there’s not much evidence to support that trend among the Democrats but plenty of evidence to support it among the Republicans.

Some years ago, political scientists Norm Ornstein and Tom Mann popularized the notion of “asymmetric polarization” and argued that it was worse among elites such as lawmakers on the Republican side than it was among lawmakers on the Democratic side.[5] The ongoing work in the Primaries Project offers evidence that polarization is worse on the Republican side than on the Democratic side, and that moving far right is received more enthusiastically among Republican voters than moving far left is among Democratic voters.

The question this poses for the elections of 2022 and beyond is whether the Republican Party’s enthusiastic embrace of Trumpism will, at some point, go so far as to backfire and create a large and sustainable Democratic majority. Early indications are that abortion politics may be the cutting edge of this kind of overreach.

[1] For research from prior years go to: (Back to top)

Drew Barrymore-Approved Sunday Riley Is on Sale at QVC

How to Watch ‘After Ever Happy’