Life changed five years ago for the residents living on a small street in a small town, but you wouldn’t know it by a casual stroll through the neighborhood today.

Walking 7th Circle in Marengo on the day before Memorial Day gives you an idea of the closeness of the neighborhood: open garages and backyards filled with the sounds of celebration.

Cradling her dog in her arms, Kim Keefer welcomes a guest carrying refreshments to the front door. Surveying the scene, you would have no idea that on June 11, 2017, on what should have been a similarly peaceful Sunday morning, the street was shaken by a natural gas explosion that left nearly 20 houses uninhabitable and dozens more damaged — and two residents injured.

Keefer was awakened around 5 a.m. by a shower of collapsing drywall.

“I just remember hearing a big boom,” she said. “I woke up, and the ceiling was on me.”

She left her room on the second floor and joined her 17-year-old daughter, Hailey. As they attempted to descend the steps, they found “the whole side of this house was gone. So I saw the whole neighborhood from the end of our hallway, and there were no stairs. We couldn’t get down the stairs.”

The two were able to climb down a ladder lifted to her daughter’s window by a neighbor, escaping just as flames reached the floor.

Meanwhile, her husband, Tim, and 19-year-old son, Austin, were covered in drywall in another part of the house. Austin was able to clamber out of the debris and then lift his father from the rubble. 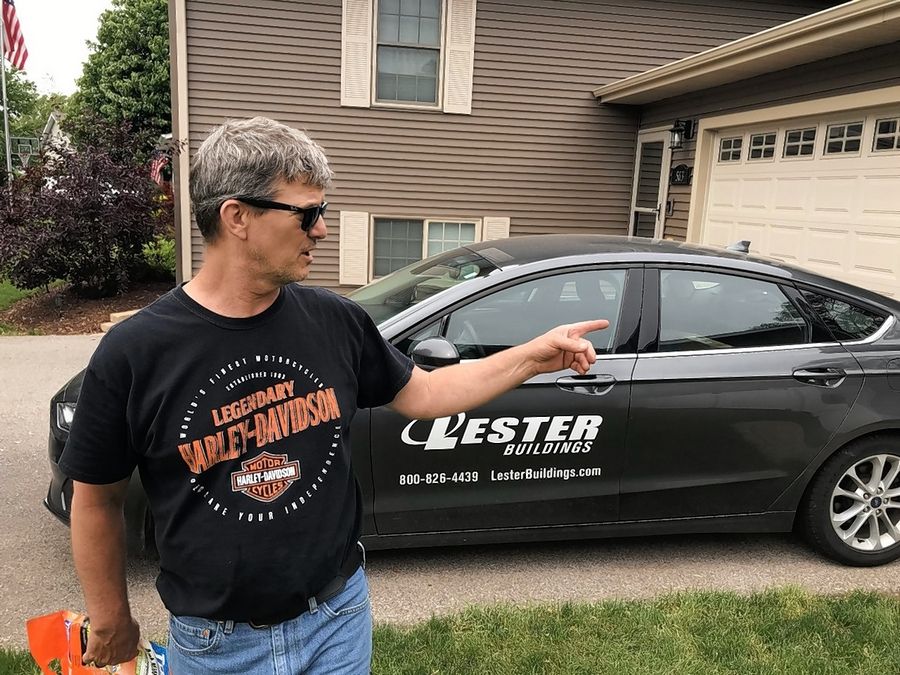 Dan Hogan discusses the 2017 gas explosion that destroyed his home and that of several of his neighbors in Marengo. “It just rocked the neighborhood,” he said.
– Steve Zalusky | Staff Photographer

A few doors down, Dan Hogan experienced a scene he describes as “surreal.” The early morning blast sent glass and building material scattering in all directions.

“It just rocked the neighborhood,” he said. “There was a two-by-four that had penetrated the wall on the left side of the window, just about two feet from my son’s bed. (There was) plywood sitting on my cars.”

At the time of the explosion, a first responder was already on the scene.

“I was literally a block away, like half a block away looking at the back of the house that exploded,” said John Kimmel, now chief of the Marengo Fire Protection District.

“It was shocking at first, to see a house explode like that,” he said.

Kimmel made the initial 911 call. Eventually, dozens of fire companies descended upon the area. Flames and smoke pour from a Marengo home after a massive explosion devastated a neighborhood June 11, 2017.
– Courtesy of Kelly Dowda

The explosion also awakened Marengo’s new mayor, John Koziol. Seeing a plume of smoke, he rushed to the scene.

“My first immediate reaction was a plane crash,” he said.

Dawn St. Clair, Keefer’s next-door neighbor, and her family were in California visiting friends when the blast tore through her home. At about 3:15 a.m. Pacific Time, she received a call.

“Your house just blew up,” she was told.

“It was crazy, waking up out of a sound sleep and then getting that news,” said St. Clair, whose pet cat died in the explosion. “I knew that we had to immediately return home.”

Her family’s insurance agent prepared her for the shock by telling her not to expect to find anything where her home once stood.

When she got back, St. Clair caught glimpses from outside the fence around her property of what was her home — burned shells of cars and a boat. A stove hanging from a tree. Parts of a vacuum cleaner in the middle of the street.

“It’s something you really have a hard time wrapping your mind around. Everything? Surely not everything. Like maybe there’s a missing wall or something,” she said. “No, everything was gone. Just literally flattened.”

For the St. Clairs and the Keefers, the aftermath was a year of adjustment.

Insurance covered temporary living quarters while their homes were rebuilt.

Getting Real, and Surreal, With Angelina Jolie’s Favorite Milliner – WWD

“They held our hand through the whole process,” Dawn St. Clair said.

The St. Clairs stayed in a hotel in Woodstock for 10 days before they found a temporary home in a condo less than a mile from 7th Circle.

“We called it our new normal,” said Kim Keefer, whose family also settled into a rental home. “I just remember trying to print out as many pictures as I could that were on Facebook and that I had online and stuff, just to make the rental house a little bit more personal.”

While no longer living there, the St. Clairs visited their property to search for important items that may have survived. Mike St. Clair found his parents’ ashes, and the couple eventually located their wedding rings. They also found a Bible, which Dawn called “an important symbol of what happened and how we all came through it and persevered with God’s hand.”

Smoke and flames shoot from homes on 7th Circle in Marengo after an early morning gas explosion June 11, 2017.
– Courtesy of John Koziol.

The community banded together to help the stricken neighborhood.

“Everybody was working together, helping each other out,” said Koziol, then less than two months into his first term as mayor. “That’s what small communities are about.”

It helped that the community was close-knit before the blast. More than a dozen people on the block went to the same high school, Hogan said, and five were in the same graduating class.

Donations poured into the M.O.R.E. Center, a nonprofit organization serving needy individuals in the Marengo and Union area.

The wrestling community organized a benefit meet to support the Keefer family. Tim Keefer is the wrestling coach at Marengo High School.

Residents gathered for a Marengo Strong community day, and T-shirts, magnets and bumper stickers reading “#MarengoStrong,” with a heart in place of the “o,” were sold to raise money for affected families.

Local businesses pitched in, among them Lee’s Martial Arts Academy, which organized a Break-A-Thon fundraiser.

“It was really neat to see the community come together and really take care of each other,” said Kimmel, the fire chief. “We had neighbors that were handing out water, setting up places for people to eat, bringing clothes, the high school opened up, so they had somewhere to go.”

Koziol said the city helped by waiving permit fees to fast-track reconstruction and discouraging solicitors who might want to take advantage of stricken families.

“I would say the community was probably our backbone,” said Katie St. Clair, Dawn’s daughter. “They were really great, in every way imaginable.”

For Dan Hogan’s family, moving back did not take as long as some of their neighbors. His construction background proved a blessing.

“I knew people,” he said. “I had a guy that I used to work for that I called and said, ‘Hey, I need your help.’ The siding guy was a guy from town. The plumbing and heating guys were guys who worked on my stuff before.” 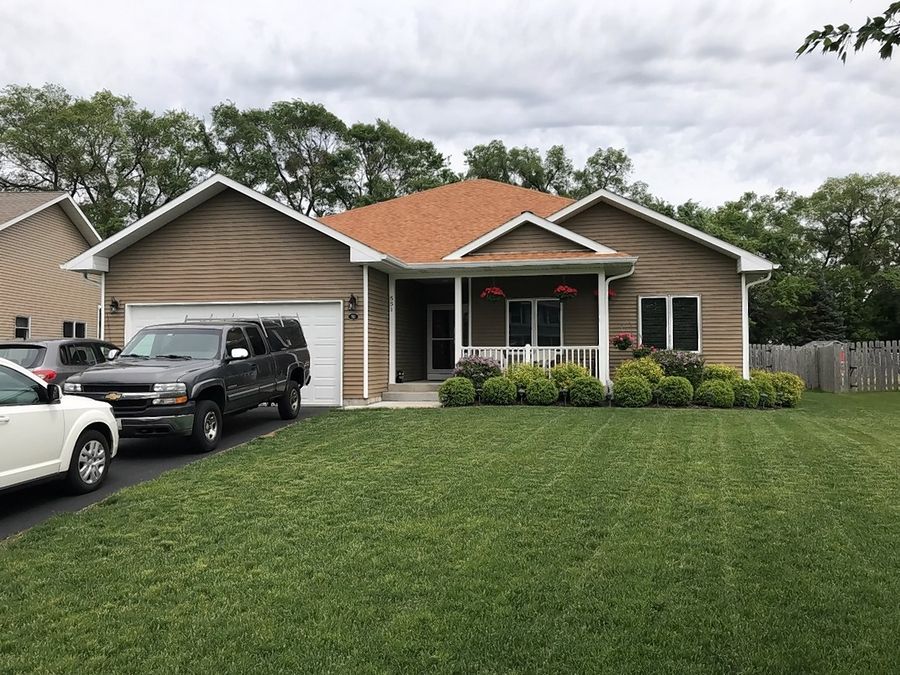 The Keefer family has rebuilt in Marengo after a June 11, 2017, explosion leveled their home.
– Steve Zalusky | Staff Photographer

Kim Keefer’s home is rebuilt, although it is now a ranch, not a two-story building.

When the St. Clair family finally moved back 16 months later, it took some time to become reacclimated. But gradually they moved in new furniture and appliances, much of which had been waiting in a Lowe’s warehouse.

Some traces of their former life remain, discovered when planting around the property.

“We (occasionally) come across a piece of our old house,” Dawn St. Clair said. To this day, no one can say what caused the explosion. A state fire marshal investigation was inconclusive.

While there no human deaths or significant injuries, residual psychological effects remain.

“I know some of the neighbors and friends I have that live in that area are still struggling with it a little bit,” Kimmel said. “They get a little nervous when they’re lighting their stoves or their grills, and on the Fourth of July, when that comes around and people are shooting off the fireworks.”

Katie St. Clair said coming out of a tough time, the family has learned to value people over belongings.

“I think as a family, we’ve come out a lot stronger, but it was many years to get to that point,” she said.

‘This Is Us’ Says Goodbye, ‘Stranger Things’ Premieres, and More Shows to Watch This...