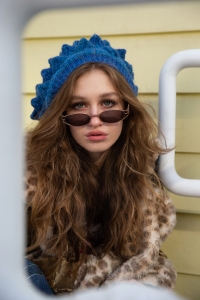 Notable past credits: Ryder made her onstage acting debut on Broadway as a child actress, starring as Matilda in “Matilda, the Musical” and as Young Elsa in “Frozen: the Broadway Musical.”

Her fashion prep: “I’m excited to see everyone’s fashion. I love fashion,” says Ryder, who carefully curated all of her “festival fits” via Lower East Side vintage shop Big Ash.

Making her own Park City debut: Ryder was back in Park City for the first time since 2020, when her older sister Talia Ryder was at the festival for the film “Never Rarely Sometimes Always.” “It was crazy and really cool to see [Talia] do this,” says Ryder. “She’s paved the way for me.

“'[Mutt]’ is about a trans guy, a day in his life,” says Ryder. “It’s 24 hours, and he has to encounter three people from his past: his ex-boyfriend, his sister, and his dad. I play his sister. She gets her period for the first time and is seeking a friend for help. She hasn’t seen her brother in a year and a half, so she really wants to find that connection again and find the love that she misses. I think ‘Mutt’ does a really good job showing love in different relationships and how it changes through a lifetime.”

First-time director Vuk Lungulov-Klotz found Ryder through the same casting director who booked her in “Matilda.” “Mutt” filmed at the start of fall 2022, and several months later the cast and crew were in Park City for the movie’s festival premiere.

“The stars aligned,” says Ryder, who had just come from a panel featuring Lungulov-Klotz on Main Street. “I was just doing ADR like a few weeks ago, which is crazy,” she adds. “I’m just so happy to be back here at Sundance to have a reunion with everyone. Because it’s really like a family now; we’re all so close.”

After the festival it was back to class: Ryder is currently finishing up her senior year of high school in New York. But after graduation, she hopes to continue honing her craft onscreen. “I love being on set,” she adds. “This is what I want to do.”

‘Les Miserables’ Movie Cast: Where Are They Now?