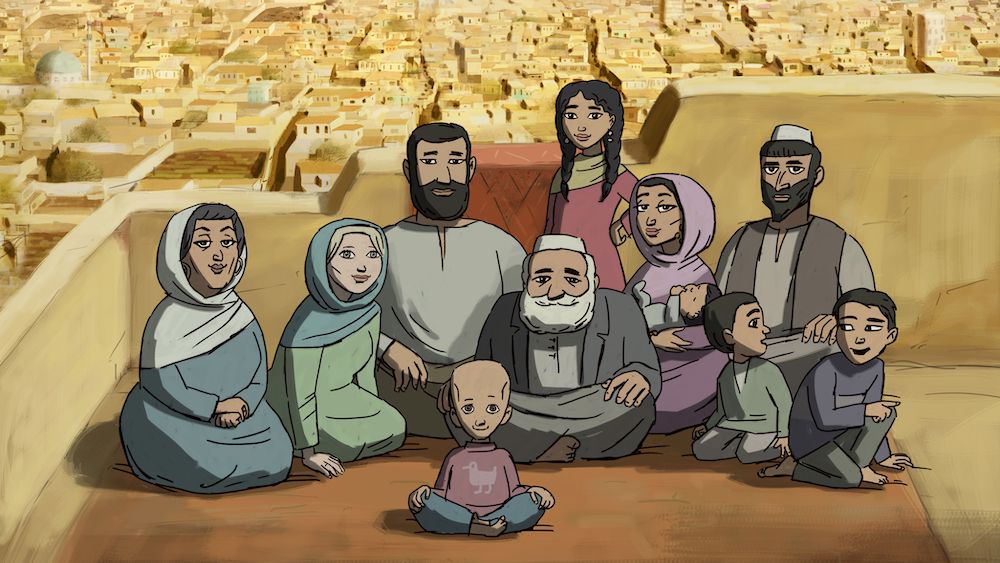 A Czech woman married into a working-class Afghan family provides a nuanced perspective on life in Kabul in the interregnum between Taliban rule in the animated drama “My Sunny Maad,” from director Michaela Pavlátová. Based on a novel by the Czech investigative journalist Petra Procházková, it sensitively portrays the complex environment of Kabul in the second decade of the 21st century. And it feels eerily prescient in the way it captures the ambivalent feelings expressed by many Afghanis toward the West. Current events in Afghanistan as well as the surge of interest in the Danish animated film “Flee” should spark extra desire to see this strong, humanistic film, which nabbed the jury prize in Annecy.

From the opening moments in which the film enters the window of an Afghan house, we see things through the point of view and savvy narration of blond, gray-eyed Herra (voiced by Zuzana Stivínová). She’s the devoted wife of Nazir (voiced by Haji Gul Asir), with whom she fell in love while studying economics in her hometown of Prague. Now she shares a small house with him; his critical mother (voiced by Nadia Lokanwal); wise, progressive grandfather (voiced by Abdullah Ebrahimkhail); beleaguered sister Freshta (voiced by Shamla Maqsoodi); Freshta’s violent husband Kaiz (voiced by Mohammad Aref Safai) and their four children, including beautiful teen daughter Roshangol (voiced by Maryam Malikzada).

While Herra wholeheartedly tries to assimilate into her new extended family, cultural differences frequently impinge on her relationship with her husband. Pavlátová’s witty drawings neatly encapsulate various situations, from the problem Herra’s lack of virginity poses in this honor culture (along with Nazir’s unexpected reaction) to Herra’s feelings of standing out as a Western woman in spite of being under the burqa.

Although Herra hoped for a large family, she’s still childless after nearly 10 years of marriage. When a relative brings the odd-looking, wise-beyond-his years, abandoned child Mohammad, known as Maad (voiced by Shahid Maqsoodi) to their home, his presence proves a boon for the entire extended family. He becomes Herra and Nazir’s longed-for son, a card-playing companion for grandfather, and an escort (disguised in a burqa) to bring Roshangol to school. Like Herra, with whom he shares gray eyes, he’s an outsider because of his illness, but his gender gives him more social standing.

When Nazir finally finds work with an American NGO, albeit for his skills as a driver rather than as a trained economist, it changes the fate of his family in ways few could predict. The multi-lingual Herra is also recruited to help with their women’s programs, a position with more status than Nazir’s, and which requires her to speak to and sometimes be alone with men. The multi-layered screenplay by Ivan Arsenjev and Yaël Giovanna Lévy, which continually advocates for mutual respect and understanding, subtly takes note of the problems this causes. It also shows Herra as an articulate explainer of Afghan social mores when faced with the complete lack of cultural sensitivity shown by the American soldiers and naive aid workers, who often have a savior complex.

Helmer Pavlátová, an Oscar-nominee for her 1991 cel-animated short “Words, Words, Words,” cannily uses the medium to depict the deep emotion and bitter humor of the story. For instance, the stylized, piquant images of women throwing off their burqas and riding on skateboards, hair blowing in the wind, captures the feeling of exhilaration felt by Herra and Roshangol, when she brings the latter to school for the first time.

Made over seven years, with animation teams in the Czech Republic and on the Indian Ocean island of Réunion, with a sound team in Afghanistan recording an excellent team of Afghan voice actors, the film also benefits from atmospheric sound design by Niels Barletta, Régis Diebold, Gregory Vincet, Mathieu Z’Graggen and Jan Čenek and a gripping, avant-garde score by the Russian-born French musician brothers Evgueni and Sacha Galperine.

This review is of the international version of the film, which features dialogue in Czech, Dari and English. A domestic version with different voice actors, boasts all dialogue in Czech. The voice of the stellar Zuzana Stivínová as Herra anchors both versions.

Khloe Kardashian, Tristan Thompson Are In a ‘Unique Situation’ Post-Split

Just 100ish of the Best Dog Names for Your Lil Furbaby