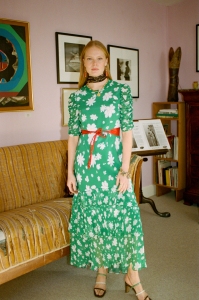 LONDON — The British brand Rixo, known for its bright, printed maxidresses, will open its first flagship store in April on the King’s Road in London.

The store will be 5,000 square feet with a bar and coffee shop inside, said Orlagh McCloskey, who cofounded the business with Henrietta Rix in 2015.

She said they’d been planning the flagship from the very early days of Rixo, “before we even had a business plan,” but the ideal space only became available last September.

McCloskey said her twin sister Gemma, founder of the design firm Cupla Studio, is an interior designer and sketched out “the dream Rixo flagship store in 2015. She is now designing our flagship store, so everything has come full circle.”

She added that the new store “will also give us the opportunity to go back to our vintage roots with a ‘True Vintage’ edit.” The exclusive edit will consist of specially curated pieces of vintage clothing, jewelry and accessories, discovered by McCloskey and Rix.

“It’s just like in the first Rixo pop-up shop in 2016. The flagship will also have a dedicated showroom for our press and wholesale partners, plus more exciting initiatives yet to be announced,” McCloskey added.

Since launching in 2015, Rixo has made a name in the contemporary British fashion market. The two business partners started with ready-to-wear and later ventured into footwear, accessories, loungewear, outerwear and bridal, offering sizes ranging from a U.K. 6 to 24.

The brand has three stores in central London and employs 85 people.

As the business heads into its eighth year, McCloskey revealed it will be moving away from “twice-weekly drops,” and instead focus on monthly collections. The hope is to “encourage our community to buy less and wear more and allow them to see everything at the one time, so they can be sure of their favorite pieces.”