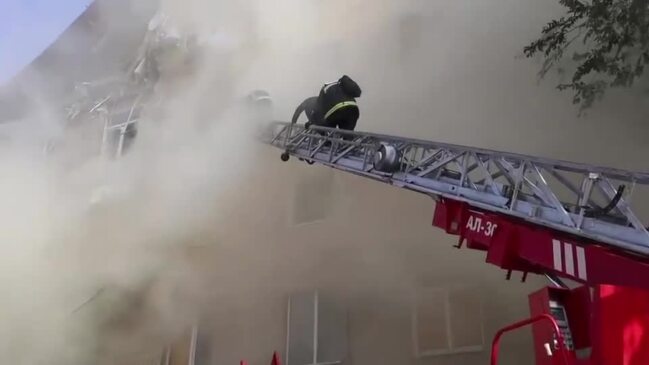 A Russian rocket struck a five-story residential building in central Kharkiv, Ukraine, on Tuesday morning, September 6, while a second missile landed in the courtyard of an administrative building, according to Ukrainian officials. The governor of Kharkiv Oblast, Oleg Synegubov, who was at the scene as members of Ukraine’s State Emergency Service (SES) responded, said the top three floors of the building were completely destroyed. Many residents had already left the building, Synegubov said. According to Kharkiv’s mayor, Igor Terekhov, three people were rescued. This footage from the SES shows responders using ladders to rescue residents and animals trapped inside apartments and working to extinguish fires caused by the strike. The rockets fell on Kharkiv at around 9 am, said Synegubov, who accused Russia of trying to target civilians as they made their way to work. The Kharkiv Regional Prosecutor’s Office said preliminary data indicated that the missiles were fired from Russia’s Belgorod region. Credit: SES Kharkiv via Storyful