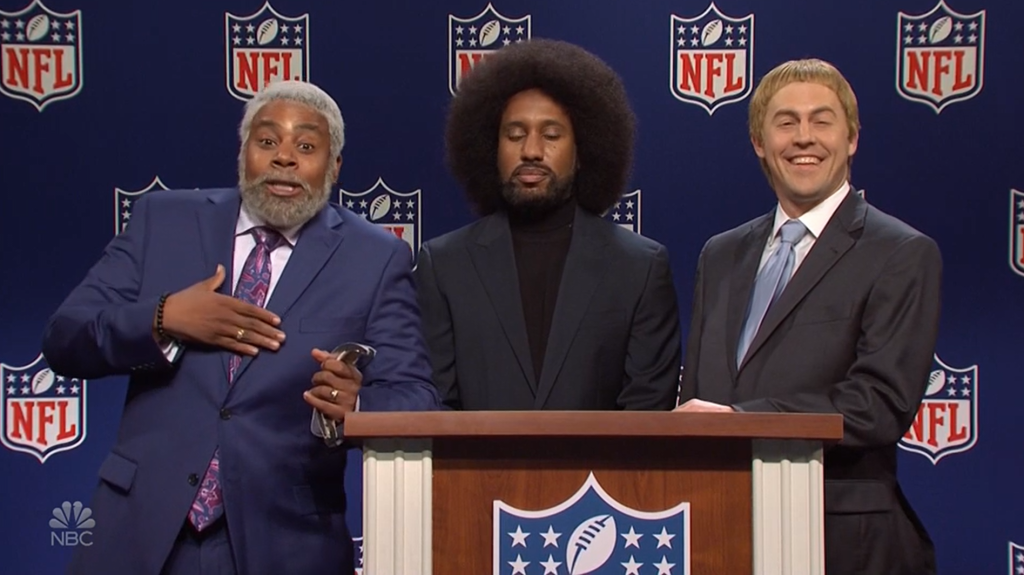 “Saturday Night Live’s” cold open took aim at the scandal surrounding former Las Vegas Raiders coach Jon Gruden, who was forced out last week after revelations of shockingly racist, misogynist and homophobic comments he made in emails while he was an ESPN commentator.

The sketch featured “SNL” key players including Colin Jost, Cecily Strong, Kenan Thompson, Heidi Gardner and Pete Davidson. The sketch featured a series of people accepting and then quickly resigning as Raiders coach because of problematic statements in the past.

Raiders owner Mark Davis (played by James Austin Johnson) was also skewered for his unusual bowl haircut. “I’ve heard all the jokes about my hiar and how Donald Trump’s haircut gave me a haircut.”

Jost played NFL commissioner Roger Goodell. “All 32 teams understand that diversity is our strength,” Jost as Goodell said. “I know our Black coaches would agree. Both of them.”

Davidson appeared in the guide of former football player Larry Rucker. He steps to the podium and says “It’s a real shame I have to immediately resign. They just found my emails,” he said.

Chris Redd played former NFL player turned activist Colin Kaepernick, who was pressured out of the league after he opted to kneel during the playing of the national anthem in a statement about the killings of Black men at the hands of police.

“Huh, I wonder if anyone tried to warn people” about racial discrimination issues within the NFL, Redd as Kaepernick said.

The sketch closed with Thompson appearing as LeVar Burton in a mix of two of his famous roles: Jordy Laforge of “Star Trek: The Next Generation” and the host of PBS reading show “Reading Rainbow.” Thompson broke into a “Reading Rainbow”-style song alongside Kaepernick and Davis before shifting to the familiar refrain “Live from New York, it’s Saturday Night.”

Rami Malek is host with Young Thug as musical guest. Malek, who can currently be seen in theaters playing the scarred (emotionally and physically) Bond villain Lyutsifer Safin in Daniel Craig’s swan song as Agent 007 in “No Time to Die,” opened his “Saturday Night Live” monologue addressing the elephant in the room: yes, he does have “Resting Villain Face” and is well-aware of his natural bad guy looks.

He went on to joke about how he’s always felt a kinship with the malefactors and sinners of cinema and TV, noting that Jaws was “just hungry,” and Dracula was “just thirsty,” Darth Vader was “just trying to reconnect with his son” and Freddy Krueger, well, he’s just been “encouraging kids to dream.”

Though Malek’s opening monologue was brief, he did make time to note that he is the son of Egyptian immigrants and lived such a sheltered childhood (along with his sister and his twin brother) in the San Fernando Valley, he had no idea he lived about 10 minutes away from Hollywood— or, he clarified, “3 hours” in Los Angeles traffic time.

One of Malek’s first major sketches brought a cameo appearance from Bond himself. In the gag, Craig, Malek and Thompson were auditioning to play the late, glittery Minnesotan singer-songwriter Prince for a horror flick.

Malek’s other buzzy sketch was a country musical inspired by Netflix’s hot capitalist-apocalypse bloody survivalist Korean drama “Squid Game,” where he shared some bars with Davidson.

During “Weekend Update,” hosted by Jost and Che, “Saturday Night Live” cast member Bowen Yang dressed up as an Oompa Loompa to address Timothée Chalamet’s first-look photos as a young Willy Wonka for his upcoming prequel portrayal as the flamboyant Chocolate Factory owner, and also made a quick quip about being part of IATSE. The joke came just hours after the union and Hollywood’s major studios set a three-year contract amid a strike threat that has had the industry on edge.

‘The Bachelorette’ Recap: Michelle Young Opens Up About Being Called the N-Word

Philippine Magnate Enrique Razon’s ICTSI To Purchase Back Up To $775 Million Bonds As...

Nigel Farage May Back a Brexit-like Referendum on U.K.’s “Net Zero” Plan