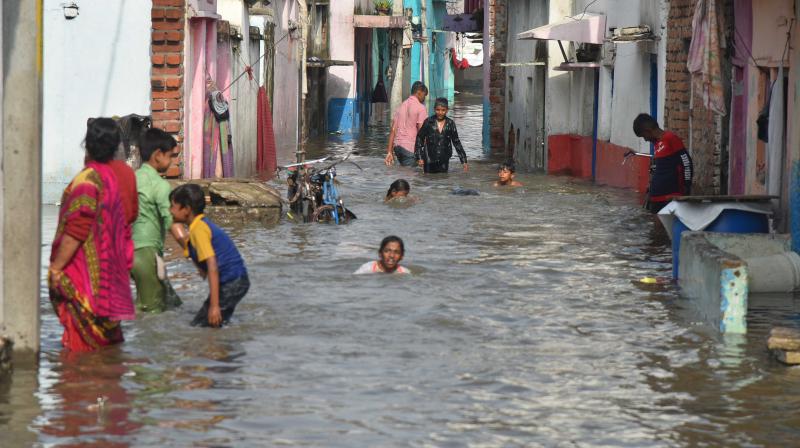 KAKINADA: Several streams, rivulets, lakes and ponds in erstwhile East and West Godavari districts are full of water following heavy rains for the past three days.

Bhupathipalem Reservoir, Subbareddy Sagar and Yerra Kalava, among others, are near their full capacity levels.

Water is overflowing on the bridge across Pattiseema Lift Irrigation Scheme at Anjaneyanagaram village in Dwarakatirumala mandal of Eluru district. Yerrakalva Reservoir near Jangareddygudem is receiving heavy inflows from rivulets.

Many of the low-lying areas in towns and cities of Godavari districts are inundated. The road near Eluru Two Town is overflowing with rain water.

Amalapuram municipal commissioner V.I.B. Naidu instructed officials to clear the drainages of weeds to ensure free flow of water. He said as per IMD forecast, there will be heavy rains on Sunday.

Konaseema district recorded 1,131.6 mm rainfall and Amalapuram town 104.2 mm of rainfall. Many villages across the coast in the district are inundated with rain waters.

East Godavari district collector K. Madhavilatha asked people to be wary of rains in the coming 10 days and postpone their travel plans.