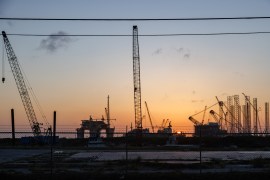 Senators Chuck Schumer and Joe Manchin shocked Washington on July 27 by announcing that they had reached a deal on a climate bill. Dubbed the Inflation Reduction Act of 2022, the bill includes $369 billion in spending on climate action. If passed, it would be the most important climate legislation in U.S. history and would be a key step toward the United States achieving the emissions reduction goal that U.S. President Joe Biden presented at the Glasgow climate summit in November 2021.

As you would expect, the bill has been getting a ton of attention, some of it frustratingly misleading. It represents a compromise designed to get all 50 Democratic senators on board and includes some provisions intended to be helpful to fossil fuel producers. Most notably, it requires the U.S. Department of the Interior to lease 2 million acres in federal lands onshore and 60 million acres offshore each year for oil and gas development (or whatever acreage the industry requests, whichever is smaller). These quotas must be met to allow federal leasing for onshore and offshore renewables development, respectively.

There is a certain irony in pairing new oil and gas development – a key cause of climate change – with development of renewable energy – a key solution. And as you might expect, some in the environmental movement are howling. “It’s self-defeating to handcuff renewable energy development to massive new oil and gas extraction,” said Brett Hartl, government affairs director at the Center for Biological Diversity, also calling the bill “a climate suicide pact.” In an online statement, a senior scientist at 350.org called the bill a “sham” and said that it “contained so many giveaways to the fossil fuel industry” that it “turns all of the gains in addressing the climate crisis into a moot point.”

But many other environmentalists and clean energy proponents are praising the bill, and the numbers support their praise. Analysis from Energy Innovation shows that for every one ton of expected emissions from the bill’s fossil fuel provisions, the bill will result in 24 tons of emissions reductions. That’s a huge net positive! A reason for the large reduction in emissions is that the bill contains provisions affecting every major emitting sector in the economy – transportation, electricity generation, industry, homes and buildings, and agriculture. There’s something for everyone, and the broad scope of the bill brings large emissions reductions.

Harnessing the power of consumer demand

Another reason for the large net positive impact on greenhouse gas emissions is less obvious, but very important. The bill aims to reduce fossil fuel demand by providing tax credits and rebates for consumers that purchase electric vehicles and energy efficient appliances, for utilities and developers that build renewable electricity and electricity storage, and for companies that build efficient factories or efficient products. Reducing fossil fuel demand is the way to reduce greenhouse gas emissions.

What about the fossil fuel production that the bill also seems to encourage? Well, there’s no guarantee that those acres will actually be leased if the fossil fuel industry doesn’t want them, nor that leased acres will ever actually deliver oil and gas. The oil and gas companies will make those decisions based on… wait for it… consumer demand.

The fossil fuel demand-reducing portions of the bill work at cross purposes with the fossil fuel leasing provisions. It’s an odd way to write legislation, but if that’s what it takes to pass the most important climate bill ever, so be it. As I’ve written before, ending U.S. oil and gas production is not the way to reduce U.S. greenhouse gas emissions. The world has plenty of oil and gas (even though it doesn’t feel that way right now) and the United States will import whatever it doesn’t produce, perhaps from countries with lower environmental standards and higher greenhouse gas emissions profiles than our own. Fighting fossil fuel demand is the way to lower emissions, and this bill does just that.

Not perfect, but a good step

The bill is not perfect — legislation never is. Without Republican votes, the bill must be passed through the budget reconciliation process, which means that the bill cannot make substantive changes in law that do not have a budgetary affect. Thus, the provisions are all tax credits, fees, rebates, and the like — financial incentives to reduce emissions. The reconciliation process does not allow for direct regulation of emissions, since such regulation would not significantly involve the federal budget. And the bill entirely avoids the idea of a fee or tax for carbon dioxide emissions, a policy that prominent economists agree would be the most economically efficient way to achieve emissions reductions.

Nevertheless, we can’t let perfect be the enemy of good, and this bill is unquestionably good. I believe the fossil fuel demand reductions that the bill would bring about vastly outweigh the provisions encouraging production, and that the industry may never drill much of the land that might be leased. (Remember that there are more than 9,000 drilling permits on public lands today that are not being used, representing nearly 12 million onshore acres.) Passing this bill would be a huge win for our climate.

These 4 Zodiac Signs Love To Travel The Most