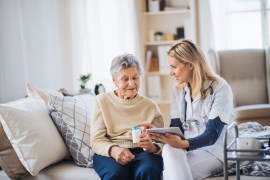 The U.S. population is aging. By 2034, the U.S. Census Bureau projects that people aged 65 years and older will outnumber those aged 18 years and younger for the first time in U.S. history; by 2050, demographics across the U.S. will mirror those in the oldest areas in Florida today. The vast majority of elderly report that they would prefer to age in place (i.e., live in their own homes as they age) rather than move into institutional settings such as nursing homes. Yet difficulties with mobility, cognition, and self‐ care rise steeply with age.

Demand for home health and personal care aides is projected to grow by 25 percent in the next decade. Currently, immigrants make up a disproportionate number of workers in the health care and household services sectors, particularly in roles that may be crucial complements to aging in place. Our study thus examines whether immigration affects the likelihood that the U.S.-born elderly age in place rather than live in an institutional setting.

Using statistical methods to tease out the causal effect of immigration, we analyze whether U.S.-born elderly living in areas with increased levels of less‐ educated immigrant labor make different decisions about institutionalization. We find that there is a negative relationship between the less‐ educated foreign‐ born labor force share and institutionalization of the U.S.-born elderly. Specifically, our findings suggest that a 10 percentage point increase in the less‐ educated immigrant labor force share is associated with a 1.5 percentage point lower probability (from 5.2 percent) of living in an institution for those aged 65 and older and a 3.8 percentage point lower probability (from 14.8 percent) for those aged 80 and older.

These effects represent 29 and 26 percent reductions, respectively. These results remain after accounting for the health status of different cohorts, for the possibility that immigrants might move to places with better health care job opportunities, and for the prospect that the elderly move to areas in response to the supply of care services. The findings complement previous research showing that immigrant labor supply affects household decisions.

We next explore a possible mechanism for these findings: the labor market for caregiving and household services. We show that U.S. regions with high levels of immigration have both lower wages and increased employment of health and nursing aides. We see similar impacts for other less‐ educated occupations that may support home‐ based care, such as construction work, housekeeping, and gardening. By contrast, wages increase for workers that require more training, such as registered nurses, and the hours they work decrease. The presence of immigrants appears to change the mix of caregiving services in a way that enables aging in place.

The COVID-19 pandemic shined a light on nursing home staffing and resident outcomes, issues that are likely to continue to be pressing as the nation ages. Our work highlights the important role that immigrants play in the market for elder care. U.S.-born elderly are less likely to live in institutions if they are in areas with increased levels of less‐ educated foreign‐ born labor, likely due to the expanded supply of labor in caregiving and other household services that helps the elderly age in their own communities. Our estimates imply that a typical U.S.-born individual over age 65 in the year 2000 was 0.5 percentage points (10 percent) less likely to be living in an institution than would have been the case if immigration had remained at 1980 levels. Together with recent work showing that immigration improves the health outcomes of those living in institutions, this line of research shows that immigration can both reduce the use of institutions by the U.S.-born elderly and improve their outcomes within them.

The Brookings Institution is financed through the support of a diverse array of foundations, corporations, governments, individuals, as well as an endowment. A list of donors can be found in our annual reports published online here. The findings, interpretations, and conclusions in this report are solely those of its author(s) and are not influenced by any donation.

Kanye West Announces He Will Run For President In 2024