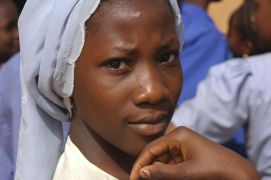 The provision of education in conflict-affected and humanitarian settings has shifted from an afterthought to a priority. Globally, 222 million school-aged children affected by conflict, violence, and humanitarian crises are in need of education support, and in the Sahel region, the combined effects of insecurity, economic hardship, and climate-induced humanitarian crises threaten to reverse years of hard-won progress in education. In Burkina Faso, Mali, and Niger, the number of schools closed due to insecurity has increased tenfold between 2017 and 2021, depriving over half a million children of education.

Beyond any other normative arguments on the value of education, the provision and protection of education in conflict-affected settings drive invaluable dividends. First, schools can provide a sense of normalcy and safe spaces where children can continue to learn, grow, and realize their potential. Keeping girls in school in crisis situations could delay the age of marriage and prevent early childbearing, protect them from gender-based violence, and empower them as young women.

Second, education can be a critical tool for countering radicalization and extremism. Out-of-school youth and children face a much higher risk of recruitment into armed militia groups than those who are in school; education can also provide a sense of inclusion among disenfranchised youth, thereby reducing their vulnerability to extremist terrorist groups such as Boko Haram.

Third, in any context, investing in girls’ education has considerable social and economic benefits. Girls in conflict- and crisis-affected contexts are 2.5 times more likely to be out of school than their peers in non-conflict settings. Girls may be targeted in their quest for education and are also less likely to return following school closures, disruption, or destruction of school infrastructure, which is why special attention should be given to the gendered consequences of interruptions in education.

As a 2022 Echidna Global Scholar, I will study the impact of insecurity not just on education access, but also on outcomes, analyzing the conditions that facilitate the continuation of learning for children forcibly on the move.

Most importantly, the provision and protection of education in armed conflict situations is a human right, further enshrined by the United Nations Security Council Resolution 2601 (2021), which was adopted unanimously and endorsed by 99 member states.

The sheer scale of the education crises in conflict-affected areas demands an expansion of services to ensure access to schooling for children forced to be on the move. However, overlooking education quality could have disastrous consequences on retention and the continuation of learning. For the majority of forcibly displaced children, without an environment that fosters learning, staying in school becomes nearly impossible. There can be no continuity of learning if there is no quality.

Poor quality education can interact with long-standing sociocultural factors to cement a perception about the uselessness of schooling. Amina (name changed), one of only two literate women in a forcibly displaced community near Tillabéry, Niger, has worked tirelessly to ensure that all children—girls and boys—enroll in school and continue learning because “The only thing left to give them is education.” Yet as she goes on to explain, “We try but even those that enroll repeat again and again and end up being sent home,” underscoring that when conditions are so dire, the provision of quality education matters. Under circumstances where most basic needs are unmet and there are so many competing needs for the time of the child in the household and in the community, “just being in school” is not enough. In protracted crisis situations, households and individuals face many urgent priorities, bringing the value of education into question, especially when education systems fail to provide quality. This can have particularly grave effects on girls, as evidence shows that poor households often consider an opportunity cost to schooling in ways that are gendered.

The provision of education must adapt to the protracted nature of today’s crises and conflicts, where education is often a target of terrorist and armed groups. In the Sahel region, these worrisome developments happen in a context marked by low learning and educational outcomes, with over half of school-aged children out of school. Crises have a considerable impact on the continuation of learning. Closures of schools due to insecurity, and the learning losses from the COVID-19 pandemic, threaten decades of gains in education.

As a 2022 Echidna Global Scholar, I will study the impact of insecurity not just on education access, but also on outcomes, analyzing the conditions that facilitate the continuation of learning for children forcibly on the move. I bring to this work a lens as a Sahelian woman aware of the transformative power of education, a scholar from the Global South, and a policymaker whose country played a seminal role in the adoption of the United Nations Security Council resolution 2601 (2021) on the protection of education in armed conflict.

With this research, I hope to inform the design, response, and implementation of education in emergency strategies for children on the move in the Sahel. If the response to education in crisis is going to be effective, bringing to the fore the often unheard voices and perspectives of forcibly displaced communities will be critical. My analysis will deconstruct and critically engage with how communities that are forcibly on the move (re)imagine the idea of education for children, while capturing the gendered dynamics in this discourse.

In many respects, Amina’s struggle to keep children from her community in school mirrors the quest for education of Nana Asmau who in the 19th century in that same region—under unlikely circumstances—opened spaces for women to learn. This also exemplifies the ethos of the Hausa saying “Ilimi haské,” which translates into “education is light.” Nowhere does this saying ring truer than in the Sahel.

It is imperative to devise urgent solutions to provide quality education for children forcibly on the move and ensure that they learn.