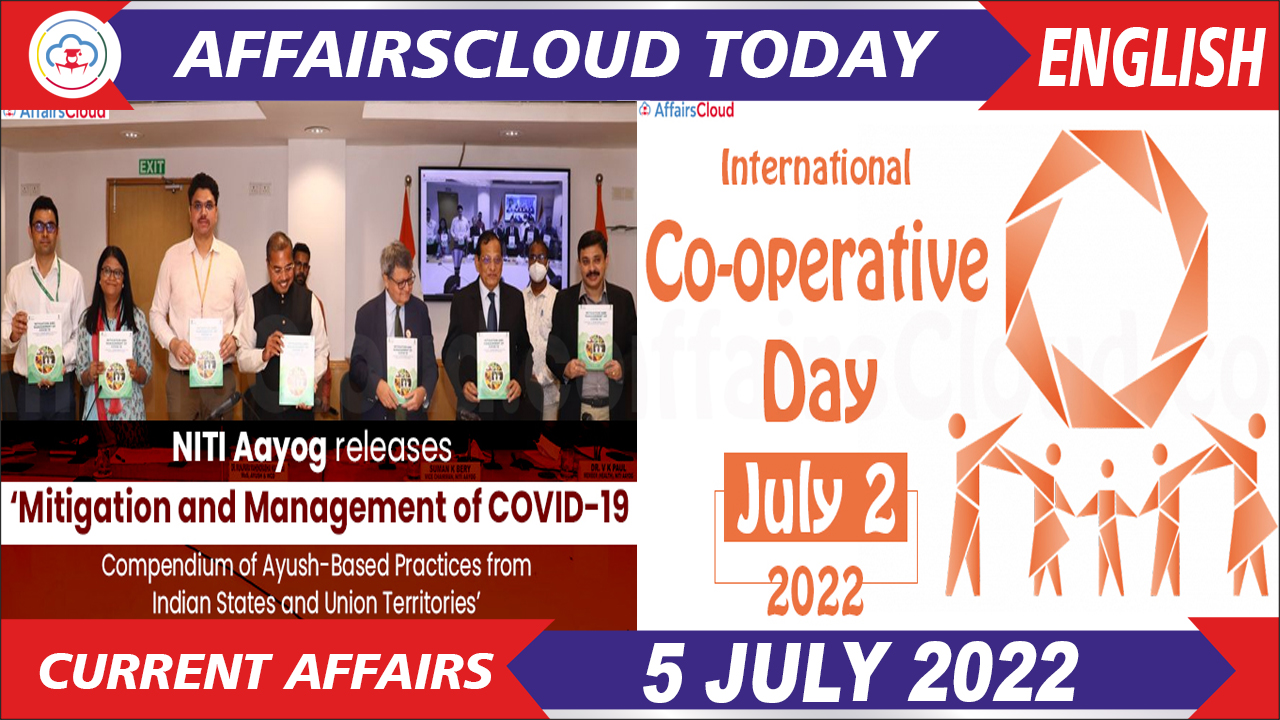 We are here for you to provide the important Recent and Latest Current Affairs 5 July 2022, which have unique updates of Latest Current Affairs 2022 events from all newspapers such as The Hindu, The Economic Times, PIB, Times of India, PTI, Indian Express, Business Standard and all Government official websites.

Our Current Affairs July 2022 events will help you to get more marks in Banking, Insurance, SSC, Railways, UPSC, CLAT and all State Government Exams. Also, try our Latest Current Affairs Quiz and Monthly Current Affairs 2022 PDF which will be a pedestrian to crack your exams.

National Institution for Transforming India(NITI) Aayog released ‘Mitigation and Management of COVID-19: compendium of Ayush-based practices from States and Union territories (UTs)’ which details information about various Ayush-based initiatives and practices adopted by the States and UTs in India for containing and managing the COVID-19 outbreak.

Department of Telecommunications (DoT), Ministry of Communications has signed an agreement with Indian Telephone Industries (ITI) Limited and Bharat Sanchar Nigam Limited (BSNL) to fund pilot projects under the Universal Service Obligation Fund (USOF).
i.DoT, BSNL and ITI Limited will fund the pilot projects of E-band, LTE indigenous technologies, including the integration of 4G and 5G prototypes with the Centre for Development of Telematics (C-DoT) Core.
ii.The USOF, under its program for induction of new technological developments in the telecom sector in rural and remote areas, is funding Four pilot projects each of around Rs 10 Crores enabling the development and hardening of the technologies.

Green Deal: pioneering proposals to restore Europe’s nature by 2050 and 50 % pesticide use by 2030

The European Commission has adopted pioneering proposals to restore damaged ecosystems and bring nature back across Europe, from agricultural land and seas to forests and urban environments. The Commission also proposes to reduce the use and risk of chemical pesticides by 50% by 2030.
i. The proposal for a Nature Restoration Law to repair the 80% of European habitats which are in poor condition, and to bring back nature to all ecosystems.
ii.The aim is to cover at least 20% of the EU’s land and sea areas by 2030 with nature restoration measures, and eventually extend these to all ecosystems in need of restoration by 2050. 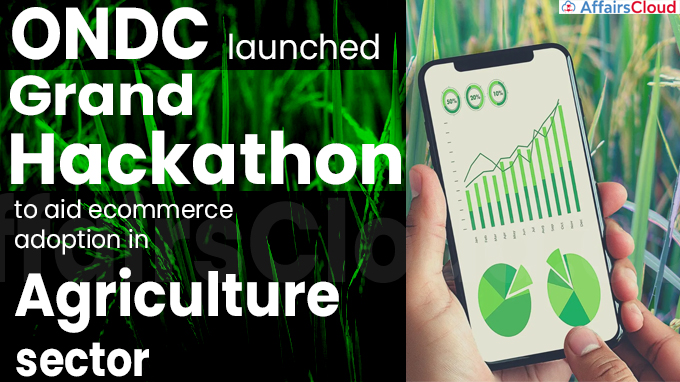 iii.ONDC will work with SIDBI, state SMEs, to encourage and build smart solutions that can help farmers and farm producers to make their product catalogue digitised and publish it on ONDC protocol with tracking option of orders and payments.
iv.The pilot project of the network is already open in 6 cities including Delhi, Bangalore, Coimbatore, Shillong, Lucknow, and Bhopal.

SEBI Extends the Deadline for Introducing DDPI System to September 1, 2022 The Securities and Exchange Board of India (SEBI), the capital markets regulator, has extended the deadline for implementation of the guidelines, related to the Demat Debit and Pledge Instruction (DDPI) for pledging and repledging of stocks for margin purposes, by 2 months, from its original date of July 01, 2022 to September 01, 2022.

Objective: To protect the interests of investors in securities, and to promote the development and regulation of securities markets.

Demat Debit and Pledge Instruction (DDPI) system
i. Significance: Since DDPI is designed to prevent misuse of client securities by brokers using the POA system, it will be a reliable mechanism for stock brokers to gain consent from their clients for debiting and pledging their securities in the demat account.
ii.With the DDPI, clients will explicitly grant permission for the stock broker and depository participant to have access to the accounts of their beneficial owners for the limited purpose of meeting pay-in obligations for the settlement of trades they have conducted.
iii. A client can use the DDPI or complete the settlement by issuing physical Delivery Instruction Slip (DIS) or electronic Delivery Instruction Slip (eDIS) themselves.
iv.Existing PoAs, on the other hand, will be valid until revoked by the client. So, if a client refuses to execute the DDPI, the stock broker and depository participant will not directly or indirectly force the client to do so or deny services to the client.
v.Limitations of DDPI: DDPI will only be used for two purposes.

vi.Stock Exchanges and Depositories are required to inform their members / participants of these provisions and publish the same on their websites.

RBI’s Effort to Check Frauds
In collaboration with Reserve Bank Information Technology Private Limited (ReBIT), the Reserve Bank of India (RBI) conducted research in 2021–2022 on the implementation of the Early Warning System (EWS) framework in a select group of Scheduled Commercial Banks. Machine Learning (ML) algorithms were utilized to assess the efficacy of EWS in a few banks.

Banks That Reported Fraud
i. One of India’s largest bank frauds, totalling 22,842 crore, was reported by the State Bank of India (SBI) earlier in 2022 perpetrated by ABG Shipyard & promoters. 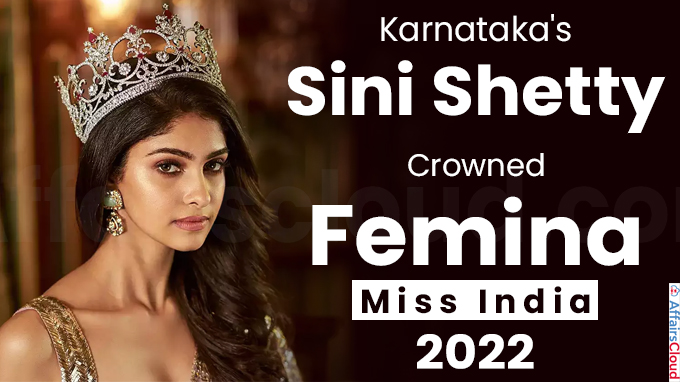 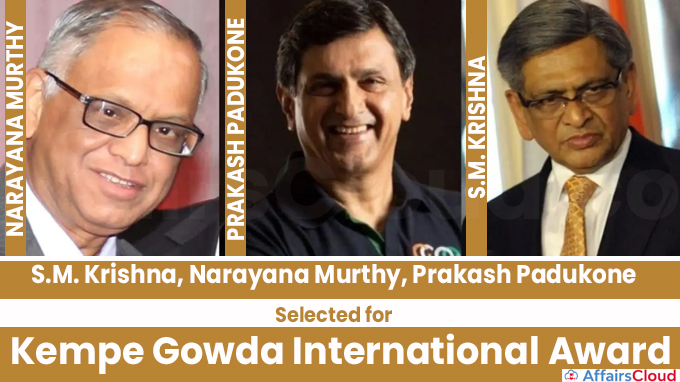 Key Points:
i.The committee, headed by Start-up Vision Group head Prashanth Prakash has been constituted by the government to nominate candidates for the award. About  Yair Lapid:
i.Yair Lapid was  born on 5 November 1963 in Israel. He was a  journalist by profession.
ii.In 2013, he became  Finance Minister in the government of then PM, Benjamin Netanyahu. In 2020, he became the leader of the opposition in the Knesset.
iii.He previously served as the alternate PM of Israel and minister of Foreign Affairs from 2021 to 2022.
Yair’s Books- “Memories After My Death”.
About Israel:
Currency- New Shekel
President- Isaac Herzog. 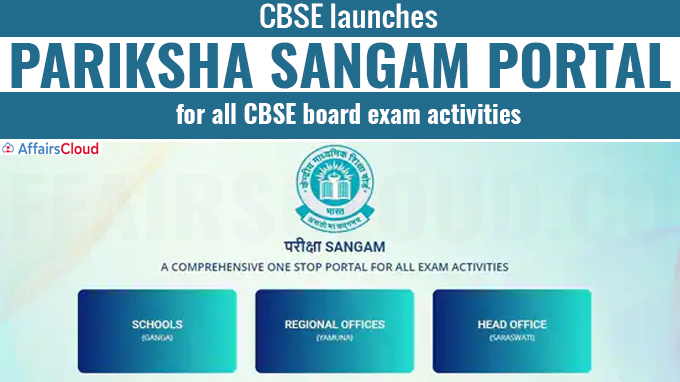 The Central Board of Secondary Education(CBSE) launched a  digital portal named  ‘Pariksha Sangam’ to streamline all CBSE board exams and result related activities for classes 10th and 12th. A Virgin Orbit’s fully mobile LauncherOne system conducted its first ever evening flight from a bare concrete pad and a runway at the Mojave Air and Space Port in California which carried 7 United States (US) Defence Department satellites.
Key Points:
i.The launch was procured by the U.S. Space Force for a Defence Department test program and all the 7 payloads will conduct various experiments.
ii.The seven satellites deployed by the Straight Up launch are from multiple government agencies and will facilitate experiments intended to demonstrate innovative spacecraft technologies, new approaches for satellite applications, and Earth atmospheric science.
iii.This launch was named as ‘Straight Up’, inspired by American singer Paula Abdul’s debut studio album ‘Forever Your Girl’, which was released through Virgin Records in 1988.
Note – Virgin Orbit will also launch 2 satellites through a joint project of the United Kingdom’s (UKs) Ministry of Defence and the U.S. National Reconnaissance Office from Newquay Airport in Cornwall, England that conducts radio signal monitoring tests. This would be the 1st ever launch from UK soil.
About Virgin orbit:
Founder – British billionaire Richard Branson
Establishment – 2017
Headquarters – Long Beach, California (currently conducts launches from the Mojave airport) Iran launched its second  solid-fuelled rocket named “Zuljanah” with a satellite carrier  into space  by the Ministry of Defense and Armed Forces Logistics.

About Zuljanah:
i.It’s a solid-fueled 25.5 meter-long rocket which can  carry a satellite of  220 kilograms into space. It will gather data in low-earth orbit as well as promote Iran’s space industry.
ii.The  rocket was named for Imam Hussein’s horse, who was the grandson of the Prophet Muhammad.
About Iran:
Capital- Tehran
Currency- Iranian rial
President- Ebrahim Raisi On 3 July 2022, Spain’s Carlos Sainz Jr. of  team Scuderia Ferrari ,  won the Formula 1 Lenovo British Grand Prix 2022 trophy at the Silverstone circuit, in Silverstone, England. It was his
his first career Formula One (F1)  race victory.

Rajiv Ranjan Mishra and Puskal Upadhyay have authored a new book titled “Ganga: ReImagining, ReJuvenating, ReConnecting” describes the issues faced by the National Mission for Clean Ganga (NMCG) team during its task.
The book published by Rupa Publications India chronicles the long and complex journey of transcending the challenges of over-abstraction of water, pollution abatement, bringing behavioural change, and making collaborative partnerships to achieve their goals. 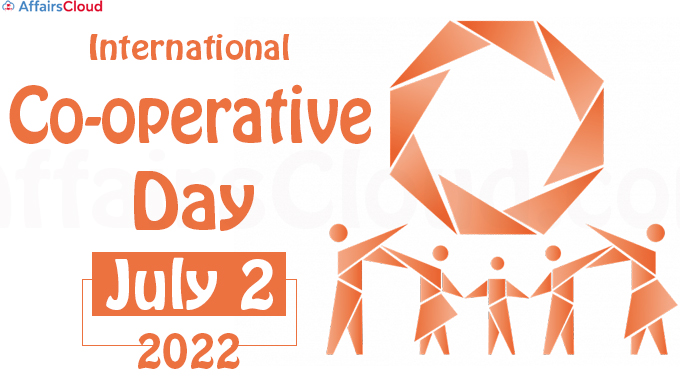 The United Nations(UN)’s International Day of Cooperatives (CoopsDay) is annually observed across the globe on the first Saturday of July to create awareness about the contributions of cooperatives toward the development of society. Coops Day is an annual celebration of the Cooperative movement.
The day also commemorates the establishment of the International Cooperative Alliance(ICA), a non-governmental cooperative union representing cooperatives. 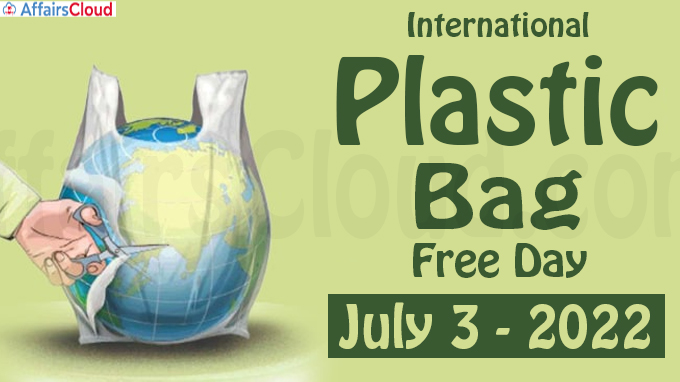 International Plastic Bag Free Day, celebrated  annually on July 3 at the global level to spread awareness about the harmful effects of plastic and ways to eliminate the use of plastic bags. 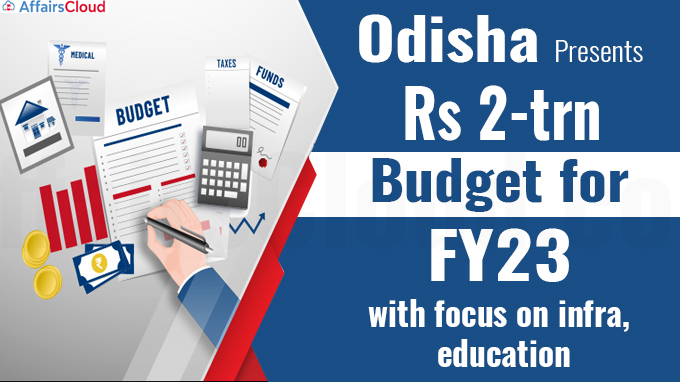 The Finance Minister of Odisha, Niranjan Pujari, has proposed a Rs 2-lakh crore budget in the state assembly for the fiscal year 2022-23 (FY23), with a focus on strengthening infrastructure, developing education and health sectors, and enhancing livelihoods of people.

iii. The outlay for Disaster Response Funds will be Rs. 3,210 crores. Transfers from State to the Local Bodies will have an outlay of Rs. 7,200 crores.
iv.Agriculture & Allied Sector Activities: Under the Krushak Assistance for Livelihood and Income Augmentation (KALIA) scheme, an allocation of Rs 1,874 crore has been made for providing assistance to farmers.
v.Women & Child Development: Under the Maternity Benefit Programme “MAMATA” scheme, a provision of Rs. 247 crore is made.
About Odisha:
Chief Minister (CM) – Naveen Patnaik
Dance – Ghumura Dance; Ranapa Dance; Jodi Sankha Dance
>> Read Full News

The Indian Bank has signed a Memorandum of Understanding(MoU) with the Government of Haryana regarding the distribution of mobile phones to consumers through e-Unified Payment Interface (e-upi) system.

India’s GDP Growth to be fastest in Asia in FY23: Morgan Stanley

India’s GDP Growth to be fastest in Asia in FY23: Morgan...