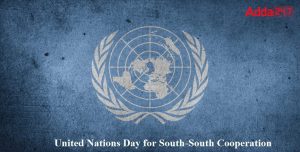 The United Nations Day for South-South Cooperation is observed annually on September 12 to highlight the importance of cooperation among people and countries in the global South. The day also aims at spreading awareness on the social, economic, and political developments made in the Southern region.

What are the objectives of South-South Cooperation?

The creation of the UNOSSC was proposed in 1974 in the United Nations General Assembly as a special unit within the United Nations Development Programme (UNDP). The idea was to make a body for technical cooperation among developing countries. The UNOSSC serves as the main office for the coordination of South-South and triangular cooperation globally and within the UN system.