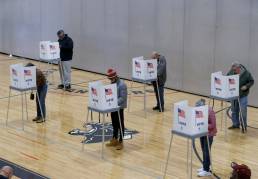 Reading the tea leaves from one election in order to predict the next is difficult but not impossible. There are two ways to do it. One way is to look at what the current election tells us about the relative strengths and weaknesses of the likely players in the next election. For that analysis, turn to my colleague Bill Galston’s piece. In it he looks at the likely effects of this election on Biden and on Trump, and he discusses the importance of the Democratic governors races. The second way to look at it is what I will call the “plate tectonics” of American politics. This term was coined by Bill a few years ago in a piece I co-authored with him. It refers to the factors, geographic and demographic, that are constantly moving—slowly—and which occasionally lead to earthquakes.

As Al Gore and Hillary Clinton know only too well, presidential elections don’t turn on the national popular vote but on the electoral vote in 50 states and the District of Columbia. Thus, changes in the partisan makeup of certain states can have enormous effects on the (mostly) winner-take-all systems of awarding electors. Over time, states change their partisan make-up. Although this is a complicated process, most of it is due to people moving into a state and bringing their partisan leanings with them. One of the most stunning examples is Vermont—a state that for most of the 20th century was referred to by politicians in the know as “rock-ribbed” Republican. In fact, Vermont was one of only two states that voted against Franklin Roosevelt in his landslide 1936 election. But over the past decades New Yorkers moved to the idyllic state to escape the city and carried with them their far-left wing politics. So today, Vermont is the only state in the union to have a U.S. Senator who is an independent who identifies as a Democratic socialist, and last night elected Peter Welch to the Senate, making him only the second Democrat to represent the state in that chamber.

Analyzing the plate tectonics of politics leads us to take a careful look at what has been happening in three “purple” states—Arizona, Georgia and Nevada. Arizona used to be a reliably Republican state and yet, to Trump’s surprise and to the surprise of nearly every pundit in America, he lost that state in 2020. Today, it is the fourth or fifth most popular state in the union to move to—based on census data and on very interesting data from the U-Haul company—which tracks moves.

A large number of the people moving to Arizona are from California. For many of them, Arizona offers a lower cost of living, lower taxes, lower housing costs, less traffic, and good schools plus natural beauty.

Not surprisingly there are a lot of Democrats among these California transplants who are part of the reason Arizona has become a very competitive state. The state was solidly Republican for much of the 20th century and in the first six presidential elections of the 21st century. The razor thin margins in 2020 and in 2022 are testament to the changing nature of the state.

Georgia is right up there with Arizona in terms of the number of people moving there. Atlanta has been an economic powerhouse for some time now. As one professor put it—Atlanta is part of the “growth” South not the “stagnant” South. And Atlanta and its suburbs are the center of that growth. People from around the country and the world have been moving there making it the center of Democratic politics in the state. In fact, as Professor Charles Bullock, a political scientist at the University of Georgia says: “We know that the strongest Republican voters are people who’ve been in Georgia more than 20 years… Individuals who have been in Georgia less time are more likely to be Democratic.”

Finally, Nevada, like Arizona and Georgia, has seen in-migration that is making it a more competitive state. Like Arizona, most of the new residents are coming from California. In Washoe County, home of Reno, Nevada, the new Tesla plant and other high-tech businesses are attracting people from the San Francisco Bay area who are bringing with them their famously deep blue politics. Meanwhile, Las Vegas, the state’s largest city, is a powerhouse of job creation, ranking behind only three other metro areas in the United States with the fastest growth in job postings. At the presidential level, Nevada has been Democratic since 2008, and its consistently high job growth seems likely to cement that tendency with voters from California.

Because the plate tectonics move so slowly, we can expect very close presidential and Senate elections in these states in the next few years. However, if the trends keep going, these states may end up as reliable wins in the Democratic column in future election cycles.