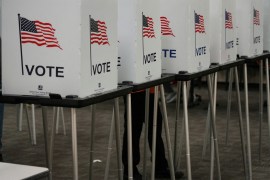 Historical analysis cannot tell us what will happen next, but it can provide a rough baseline for our expectations. With one week to go before votes are cast, the 2022 midterm elections are shaping up to be in line with most of the midterms conducted two years after the incumbent president’s first national victory, and the results seem likely to be within the benchmark established during the past four decades.

During this period, there have been four midterms conducted under normal circumstances and two in contexts shaped by extraordinary but transitory factors. Let’s begin by looking at the four normal midterm contests.

This table shows some extraordinary similarities. Regardless of their margin of victory with which they earned their general election victories, all four presidents had experienced significant declines in their job approval to the low-to-mid 40s as their first midterms approached. Their parties saw their share of the congressional vote decline to about 44%, all endured significant seat losses, and the largest losses were correlated with the largest declines in congressional vote share.

There were also two unusual midterms during the past four decades, both conducted in the shadow of war.

The 1990 Gulf War gave George H. W. Bush a huge but fleeting boost in his job approval. The 9/11 terrorist attacks did the same for his son, and their popularity enabled them to avoid the losses that presidents usually experience during their first midterm elections. It is hard to find more convincing evidence of the impact of presidential job approval on midterm elections.

By the standards of the past four decades, the 2022 midterms appear completely normal. President Biden’s 7th quarter job approval averaged 42%, and the Democrats’ share of the popular vote stands at 45.1%, down 5.7% from 2020. All else equal, the Democrats would be on course to endure a loss of more than 40 House seats.

But two things distinguish the current midterms from those that preceded it. First, even as Joe Biden was beating Donald Trump by more than 4 percent points in 2020, the Democrats lost 13 House seats, the worst performance by a first-time presidential winner’s party since John F. Kennedy in 1960. House Republicans are beginning from an historically high base for the minority party and may already have achieved some of the gains that otherwise would have occurred this year.

Second, the congressional redistricting following the 2020 Census has left a low number—perhaps the lowest ever—of swing seats where the victors won by 5 points or less of the popular vote. After the 2000 Census, there were 124 swing seats in 2002; after the 2010 Census, 99. Today, barely 30 of these seats survive.

To be sure, if there is a higher-than-average swing in the national congressional vote, as many as 25 additional seats would be in play, including some won by margins of 10 or even 15 points in 2020. Although evidence for such a swing is hard to find, it cannot be ruled out. If currently undecided voters move en masse into the Republican column during the final week of the campaign, a GOP gain of 40 seats or more would probably materialize. But if public sentiment on election day remains where it is now, a Republican gain of 25 to 30 seats is the most likely outcome.