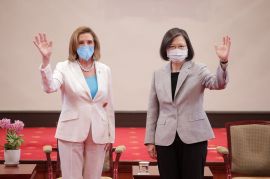 Flying into Taiwan amidst Beijing’s unprecedented military exercises in response to U.S. Speaker of the House Nancy Pelosi’s August 2-3 visit was notable for its normalcy. There was no panic, no run on food and home supplies. The public calm contrasted with the last Taiwan Strait crisis in 1995-96, when Taiwan’s stock market and currency dropped and people queued to apply for American visas. Now, by comparison, restaurants are packed and sidewalks are filled with people living their everyday lives.

I visited Taiwan with Brookings colleagues from August 8-13. Our group met with Taiwan’s top elected and appointed officials, opposition party leaders, business executives, public intellectuals, and members of civil society. Recognizing that it is not possible to form a full picture of Taiwan’s outlook based on one week on the ground, I nevertheless am sharing this situation report to help fill in the gaps at a time when COVID restrictions make it difficult to engage in such face-to-face exchanges.

At the surface, there seemed to be public pride in Taiwan’s resilience in the face of China’s escalating pressure. That steadiness both reflects and is reflected in the temperament of Taiwan’s leader, President Tsai Ing-wen. Tsai has signaled that Taiwan will not flinch, but also will not provoke. She instructed her administration to deprive China of any justification for escalating tensions in the Taiwan Strait.

During our meetings, Taiwan’s leaders were unanimous that it was necessary for Taiwan to welcome Pelosi. To do otherwise, they argued, would have communicated that visits to Taiwan are constrained by Beijing’s preferences. Such a signal would have cratered public morale inside Taiwan and fed a feeling of international isolation, they warned.

To be sure, Beijing’s intensifying diplomatic, economic, and military pressure has contributed to rising international awareness of Taiwan’s situation. So, too, has Taiwan’s centrality to global value chains through its production of over 80% of the world’s advanced semiconductor chips. America’s staunch advocacy for Taiwan’s international space, including through the G-7, the Quad, and other international groups, also has played a role.

While some of our interlocutors called for the United States to project force in response to Beijing’s military exercises, such requests reflected a minority view. By far the more common refrain was that the United States and Taiwan should work in lockstep to strengthen U.S.-Taiwan relations and solidify Taiwan’s international support. Most of our Taiwan counterparts spoke of the need to keep international focus on China’s overreaction to Pelosi’s visit.

Below the surface, there were a few variations in viewpoints among our Taiwan counterparts. One gap appeared over how to interpret China’s cyber, influence, and disinformation operations against the Taiwan public.

Broadly speaking, officials and experts with responsibility for Taiwan’s foreign relations were more prone to frame China’s attacks as a form of “cognitive warfare.” They sought to present China’s efforts to influence public and political attitudes in Taiwan as a threatening element of a Chinese campaign to alter Taiwan from within. By contrast, those with responsibility or research focus on Taiwan’s media and political discourse were more prone to poke fun at China’s ineptitude in influencing Taiwan’s domestic debates. They noted admiringly that Taiwan’s pluralistic and democratic society had produced strong antibodies to Beijing’s meddling. They highlighted Taiwan’s growing media literacy and the impotence of many of Beijing’s cyber and influence operations. They also cautioned that inflating the impact of Beijing’s intrusions carried second-order risks, such as infusing anxiety, spooking markets, and spurring capital flight.

On many internal issues, there seemed to be broad consensus. The main partisan policy divergence was over cross-Strait issues. Both major political parties, the Democratic Progressive Party (DPP) and the Kuomintang (KMT), presented themselves as safe-keepers of the status quo. They both presented the other party as rigid and ideological on China. The KMT’s argument was that they could deal directly with Beijing to lower risk and preserve stability. Since Beijing refuses to deal directly with the DPP, the DPP’s response has been to bolster Taiwan’s relations with the United States, Japan, Australia, Europe, and other partners as a bulwark against Chinese pressure.

This presents a double-edged sword for U.S.-Taiwan relations. On one hand, it incentivizes the DPP to actively coordinate with Washington. This impulse has deepened private coordination between senior U.S. and Taiwan officials. Their consultations have generated early signs of progress in advancing a shared agenda around substantive issues, such as strengthening Taiwan’s asymmetric military capabilities and building a forward-looking trade and economic agenda. It also has concentrated minds on the importance of developing a common understanding between Washington and Taipei on how to define and defend the cross-Strait status quo.

On the other hand, the DPP’s desire for visible proof of progress with the United States and others has put a premium on symbolic demonstrations of support. When such visible symbols of support have not been as forthcoming from the Biden administration as some leaders in Taipei would prefer, Taiwan authorities seem to have been turning to members of Congress and former American officials to fill the void.

Taiwan’s economic performance was a bright spot of our meetings. In 2021, Taiwan’s economy outperformed nearly every other advanced economy, growing near 6%. Several tailwinds contributed to this growth. These included a significant brain gain as Taiwan expatriates in China and the United States returned to shelter from COVID-19 and apply their talents and investments in Taiwan. Beijing’s worsening business environment also contributed to the reshoring of thousands of Taiwan firms. A global surge in demand for semiconductors disproportionately benefited Taiwan. The U.S.-China trade war also incentivized Taiwan companies to shift production from China to Taiwan to avoid American tariffs on Chinese exports.

We detected some concern that Taiwan may now be at the peak of a business cycle; as global macroeconomic conditions worsen, so too might Taiwan’s outlook. There also was guarded wariness that Taiwan’s economy may be growing over-reliant on semiconductors, what one counterpart referred to as “Dutch tulip syndrome,” and that a slowdown in demand could curb Taiwan’s overall economic performance. Such concerns were not evident in our interactions with leaders in the semiconductor sector, though. These executives projected confidence that their companies could sustain Taiwan’s global technological edge and deliver innovations that would generate demand well into the future.

Although we did not detect alarm about risk of imminent Chinese military attack against Taiwan, neither did our interlocutors seem sanguine. The war in Ukraine served as a reminder of the real risk of conflict. There was an expectation of upticks in Chinese military and other forms of pressure on the horizon. Such upticks potentially could be in response to American naval or air presence demonstrations near Taiwan, the conclusion of the Chinese Communist Party’s 20th Party Congress this fall, and/or in the run-up to Taiwan’s 2024 presidential and legislative elections, when Beijing may attempt to use shows of force to influence voter preferences.

Even though China’s military exercises were ongoing while we were visiting Taiwan, there was not much evidence of new thinking or greater urgency around Taiwan’s defense reforms. Officials and experts pointed to Taiwan’s plans to raise defense spending in 2023. Taiwan still seemed to favor a mix of defense investments between conventional and asymmetric capabilities to deal with a range of contingencies, as opposed to a pure “porcupine strategy.” They broadly agreed upon Taiwan’s need for more training for conscripts and reservists, but they did not seem to have consensus around a plan for doing so. They uniformly asserted Taiwan’s responsibility to defend itself. Most also acknowledged that Taiwan’s war reserve stockpiles are inadequate and that Taiwan must increase its supplies of fuel, food, medicine, and critical munitions. Even so, most footnoted these comments with encouragement for the United States to routinely remind Beijing that it does not rule out use of force to respond to a future Chinese attack on Taiwan. In other words, Taiwan’s leaders know Taiwan must defend itself, but they also hope the United States will do more to deter Beijing from trying to take Taiwan by force.

These expectations reflect broad recognition in Taiwan that China seeks to foster conditions for eventual unification by weakening Taiwan, limiting U.S.-Taiwan relations, and isolating Taiwan on the world stage. There also is concern in some quarters that Xi Jinping might become less patient in his approach to Taiwan the nearer he comes to the end of his time in power.

Taiwan’s current theory seems to be that it can offset Chinese pressure with greater investments at home, improved defense capabilities, predictable and steady cross-Strait policies, sustainment of its central role in global value chains, and tighter coordination with friends and partners abroad. President Tsai seems to believe that it is wiser for Taiwan to deny China an ability to achieve its goals than to confront China directly in a showdown. Her bet is predicated on an expectation that other powers in Asia and globally will recognize that their interests are implicated by conditions in the Taiwan Strait, and that this will encourage them to act on their interests to bolster stability in the Taiwan Strait. This seems a reasonable posture. At the same time, the cross-Strait situation is dynamic, not static. As challenges from China mount on Taiwan’s ability to maintain political autonomy, democratic governance, economic vibrancy, and international space, so too will Taiwan’s overall strategy need to adapt.

Ahead of Current Events — Security Today