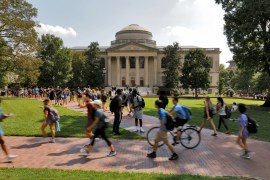 Legislation recently signed into law by Florida Governor Ron DeSantis challenges academic freedom in fundamental respects. His “Stop WOKE Act” restricts public higher education institutions, and others, from teaching about racial injustice, therefore impinging on traditional faculty prerogatives to teach courses based on their substantive expertise. In addition, provisions in the bill that allow administrators to fire professors who fail to comply with newly enacted pedagogic restrictions threaten the job security of those working in public universities.

Less understood, though, is how these threats to academic freedom also endanger democracy itself. Many analysts worrying about democracy today focus on procedural protections, such as voting rights, institutional rules, due process, and the rule of law, among other things. These features are basic requirements of functioning democracies and are the bedrock of our political system.

Yet one of the overlooked ingredients of democracy is a vibrant civil society with a knowledge sector that is free of political interference and the ability to train students in independent analysis and critical thinking. As argued in my new Brookings Institution Press book, “Power Politics: Trump and the Assault on American Democracy,” I cite a number of current threats to civil society in general and the knowledge sector in particular that are very dangerous for the United States. Democratic systems require the free flow of information, mechanisms to hold leaders accountable, and healthy civic discourse. Many of these features are under attack right now in the knowledge sector, with ominous consequences for universities, nonprofits, and think tanks.

The Value of Academic Freedom

Academic freedom is one of the reasons the United States’ higher education system has long been the envy of the world. Providing teachers and professors with the freedom to teach important ideas and encourage critical thinking among students is key to freedom, economic prosperity, and innovation. People need independence and liberty to challenge authorities, question leadership, and develop new ideas.

The scope and benefits of academic freedom, naturally, have been challenged and debated over the years. For example, conservatives have long argued that the academic freedom on college campuses is a veneer that creates a hostile environment against conservative scholars and values. In response to these arguments, some universities have created free speech zones in order to encourage an open flow of ideas. Other places have developed courses, lecture series, conferences, workshops, and academic enterprises designed to promote out-of-the-box thinking or a diversity of viewpoints. Yet, current efforts to outright silence scholars and teaching marks an important, and dangerous, escalation of this issue.

Recognizing the moral authority of independent experts, when despots come to power, one of the first things they do is discredit authoritative institutions who hold leaders accountable and encourage an informed citizenry. In Hungary, for example, government authorities attacked the Central European University that operated in Budapest and forced its relocation to Vienna, Austria. Having independent educators was deemed incompatible with an illiberal political regime. It is easy to slide into authoritarianism when fact-checkers and independent analysts are discredited and civil society organizations are weak in their capacity to question political leaders. If academic experts are discredited and lack legitimacy with the general public, it is hard for them to be effective in civic discussions. And if they worry about prosecution or selective law enforcement, it will limit their ability to challenge government authorities.

The Risk of Intimidation

In recent years, we have seen a number of cases where political leaders upset about criticism have challenged professors and sought to intimidate them into silence. One example took place in Virginia when GOP party chair Rich Anderson asked the University of Virginia to investigate Professor Larry Sabato after he tweeted “Trump, who governed on the edge of insanity for four long years, has gone over the edge. Yet millions of people and 90%+ of GOP members of Congress, still genuflect before this false god.”

According to a news account, the prominent commentator wrote this after Trump claimed in 2021 he soon would be reinstated as president. Anderson made the investigation request on the grounds that the educator’s statements “appear to violate the university’s mission statement and faculty code of ethics” and that they represented “bitter partisanship.” Fortunately, university officials defended academic freedom by putting out a statement reminding people “there is nothing in the university’s code of conduct that limits faculty from engaging in expression that is protected under the First Amendment.” That ended the matter in terms of this particular intimidation, except for whatever distraction the GOP critique caused the well-known commentator.

Other examples can be found in the area of teaching critical race theory. In a number of states, Republican legislators have introduced bills that banned or restricted the teaching of America’s racial injustices in public educational institutions. Some of these bills enacted in Idaho, Iowa, Oklahoma, Tennessee, and elsewhere explicitly banned instruction of the New York Times’ “1619 Project” that took a critical stance on the way America dealt with slavery.

A survey analysis undertaken by UCLA researchers found that 894 K-12 school districts across the country (one-third of the study’s sample) have seen efforts to restrict teaching about America’s racial history or racial equity in general. Many educators reported a “newly hostile environment for discussing issues of race, racism, and racial inequality and more broadly diversity, equity, and inclusion” and felt high levels of threats and intimidation.

These and other reactions demonstrate what a dangerous time it is for university and K-12 educators. Rather than have pedagogic autonomy and be free of political interference, legislators are directly placing restrictions on what can be said and taught within the classroom. In the same way other American institutions are being undermined and delegitimized, K-12 schools and universities are being weakened through restrictions on course content and teaching approach.

Experts are vital to democracy because they bring in-depth knowledge to civic discourse. Yet some public officials don’t like it when expertise is used against their own policy decisions. For example, several University of Florida election experts discovered this when they were asked to testify concerning the impact of new election laws on minority voters. Worried about possible voter suppression, these scholars agreed to share their views about the harmful effects of new restrictions, only to be informed by their dean they would not be able to testify. It took lengthy negotiations and negative news stories about the university before educational administrators reversed their stance and allowed the experts to testify.

Having independent authorities who can operate freely is important, but a recent episode illustrates how scholar independence has been challenged in new ways. At Yale University, Beverly Gage, the director of the Brady-Johnson Program in Grand Strategy, came under fire from top donors to her program. After one of her program’s professors wrote an opinion piece entitled “How to Protect America From the Next Donald Trump,” founding donor Nicholas Brady complained to university officials about the article and is quoted as saying “this is not what Charles Johnson and I signed up for.”

In response, Yale set up a new advisory board composed mainly of conservative Republicans, including former Secretary of State Henry Kissinger, and Brady indicated he wanted someone to observe program courses and report back on what was being taught. At that point, Gage asked the university to protect her academic freedom and argued, “It’s very difficult to teach effectively or creatively in a situation where you are being second-guessed and undermined and not protected.”. Yet, unlike the University of Virginia case where a professor under attack was supported by high-level administrators, Gage did not feel she received adequate support from her deans. So she resigned “saying the university failed to stand up for academic freedom amid inappropriate efforts by its donors to influence its curriculum and faculty hiring.”

With academic freedom and scholar independence being challenged, libel laws and defamation lawsuits are getting weaponized and personal investigations are becoming more common. People from several different organizations have faced political or legal risks from expressing their viewpoints as time-worn protections based on freedom of speech and freedom of expression have started to unravel.

For example, Donald Trump has made a practice of weaponizing libel laws by suing opinion writers who penned commentary critical of him. In 2020, for example, his campaign lawyers filed lawsuits against writers for the New York Times, Washington Post, and CNN, claiming op-ed articles had impugned Trump’s character by arguing there was a “quid pro quo” between Russia and the billionaire to aid his 2016 election.

Months later, many of these suits were dismissed by judges on grounds that they lacked merit, but their mere filing ran up legal fees and contributed to an atmosphere of fear and intimidation in various quarters. Writers have to worry if they author pieces critical of politicians that their personal texts and emails will be subpoenaed, their phone calls investigated, or they will get sued and be forced to spend a lot of money and endure considerable stress defending themselves.

There also has been an increase in defamation lawsuits on college campuses from aggrieved people. Graduate students who have complained about faculty members have been sued for defamation and professors have sued one another as well as outside agents for what they saw as false and defamatory statements.

Taken together, these lawsuits illustrate the threats to personal freedom that attack the very basis of civil society and the knowledge sector that is crucial to the functioning of American democracy. These activities challenge the ability of experts and nonprofit advocates to be independent, undermine their capacity to hold leaders accountable, and discourage experts from writing critical pieces about leaders and/or donors.

Without the means to question authority and work free of fear, it becomes easy for countries to slide into illiberalism or outright authoritarianism. There needs to be system-wide protections, otherwise faculty members are forced to depend on the vagaries of particular deans and high-level administrators. In today’s world, the risks are readily apparent and everyone should fear the possibility that the U.S. may follow the path of other nations that have limited academic autonomy, weakened freedom of expression, and harmed democracy itself.

New Sublime Biopic in the Works