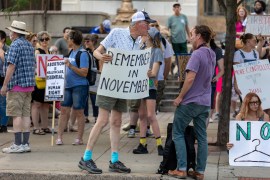 The recent electoral optimism among Democrats has many causes: gas prices are down, Biden’s legislative victories are up, and Republicans are nominating candidates from New Hampshire to Arizona who appear to be out of step with the voters. But the Supreme Court’s decision to overturn a woman’s right to an abortion may be, by far and away, the most powerful development yet this year. As the results of a ballot initiative in Kansas—a state Donald Trump won by nearly 15 points—showed, when the issue is on the ballot by itself it wins big.

Three interesting developments are changing the expectations for November. First are special elections. There have been five special elections in 2022 that pitted Democrats against Republicans. In four of these elections the Democrats did better than Biden did in 2020 and the Republicans did worse than Trump did in 2020. In New York’s 19th congressional district, the Democrat was expected to lose but he ran a single-issue campaign—pro-choice—and won. The fifth special election in Alaska was conducted under new rules known as ranked choice voting so it is harder to compare to past elections. But there, to the surprise of many, a Democrat won for the first time in 50 years.

The second development is data coming in from many states indicating that voter registration is surging and that most of those new voters are women. Tom Bonoir, a political consultant wrote in the New York Times that when he looked into new voters in Kansas, 69% of them were women. This finding was “… more striking than any single election statistic I can recall discovering throughout my career.” An Upshot analysis of 10 states with available voter registration data showed that women registering to vote rose 35% after the Supreme Court’s decision whereas men had an increase of only 9%.

A third and even more intriguing point are reports from Republicans scrubbing their anti-abortion stances from their websites or seeking to moderate their positions. In Arizona, Blake Masters, the Trump-supported Republican Senate nominee overhauled his website and tried to paint himself as a moderate on abortion, saying “look I support a ban on very late-term and partial-birth abortion… and most Americans agree with that.” Of course late-term and partial-birth abortions are not at all the issue at hand nor was that an accurate reflection of Masters’s complete stance on abortion during the primary. And when Sen. Lindsay Graham (R-S.C.) introduced a 15-week abortion bill in the Senate this past week he was quickly rebuffed by many of his Republican colleagues, including the Senate Minority Leader Mitch McConnell (Ky.). McConnell, aware of what this issue could do to his hopes of being Majority Leader again said, “I think most of the members of my conference prefer that this be dealt with at the state level.”

But even with all these signs, the question still remains: will voters who support abortion rights transfer their feelings to the individuals running for office in their state or district?

For the answer to that we need to move to an election eighteen years ago—the presidential election of 2004. That election took place between then-Senator John Kerry (D-Mass.) and President George W. Bush. It has since become the stuff of legend because Bush’s victory has been widely attributed to his win in Ohio. There, a referendum banning gay marriage was placed on the ballot (as it was in several other states) with the express purpose of driving Evangelical and other conservative voters to the polls. Bush won Ohio in a race close enough that had Kerry won he, not Bush, would have been president.

Soon after, three political scientists set out to determine how important the gay marriage ban was to George Bush’s vote. After carefully controlling for other factors, they conclude:

Although the ban on gay marriage did not push Bush over the top in every state (Bush won Ohio but Kerry won Michigan) its power in affecting the vote for president was clear. Ever since, political parties and candidates have attempted to use referenda to not only get around state legislatures, but to boost the vote for their candidates. On the Democratic side, referenda on voting rights, minimum wage, and cannabis have all been placed on the ballot not only for their own merits but with the expectation that they will boost turnout.[3]

In this fall’s election we will see a pro-abortion ballot measure appear in two states, Michigan and Kentucky. Michigan is the quintessential swing state, going narrowly for Biden in 2020, for Trump in 2016 and for Obama before that. It has a Democratic governor and a Republican legislature. The ballot measure, “Reproductive Freedom for All” would codify abortions up to 23-24 weeks. It got 325,000 more signatures than the 425,000 needed and overcame an attempt to block it by Republicans on the Board of Canvassers.

Kentucky is the other state where abortion is on the ballot. It is a solidly Republican state so there are not likely to be many congressional upsets. However, the battle is being fought at the state legislative level where an increase in pro-choice turnout could have unanticipated effects.

The referenda outcomes in these two states and their effect on the vote for other offices will be studied more intently than any similar elections in history. Already, Republicans in states like Arizona and Arkansas are asking for constitutional amendments to increase the threshold for getting referenda on the ballot, a sign that they are worried. And pro-choice groups see the ballot referendum as a tool for getting around heavily Republican states legislatures on issues with broad appeal. If the votes in Michigan and Kentucky prove to have the power to carry Democrats, expect to see, in 2024, pro-choice referenda of some sort in every state that has banned or attempted to ban abortion.

[1] The candidates on the August 2 ballot in Kansas were all in primaries thus providing no clue as to how pro-choice voters might vote in a general election.

[3] See my colleague John Hudak’s analysis from 2016. ‘Cannabis Coattails’ and the challenges of polling in 2016 (brookings.edu)