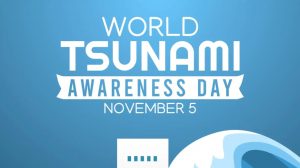 In December 2015, the UN General Assembly designated November 5 as World Tsunami Awareness Day, calling on countries, international bodies and civil society to raise tsunami awareness and share innovative approaches to risk reduction. UN Disaster Risk Reduction (UNDRR) facilitates the observance of World Tsunami Awareness Day in collaboration with the rest of the United Nations system. The date of November 5 was chosen to mark the story of “Inamura-no-hi” (burning of the rice sheaves) in western Japan. This earthquake occurred in 1858.

The theme of World Tsunami Awareness Day 2022 in Asia-Pacific: Early Warning and Early Action Before Every Tsunami. This day is celebrated to raise awareness for early warnings and actions to protect people, save lives, and prevent the hazard from becoming a disaster.

The word “tsunami” comprises the Japanese words “tsu” (meaning harbour) and “nami” (meaning wave). A tsunami is a series of enormous waves created by an underwater disturbance usually associated with earthquakes occurring below or near the ocean. Volcanic eruptions, submarine landslides, and coastal rock falls can also generate a tsunami, as can a large asteroid impacting the ocean. They originate from a vertical movement of the sea floor with the consequent displacement of water mass.

Tsunami waves often look like walls of water and can attack the shoreline and be dangerous for hours, with waves coming every 5 to 60 minutes.

The first wave may not be the largest, and often it is the 2nd, 3rd, 4th or even later waves that are the biggest. After one wave inundates, or floods inland, it recedes seaward often as far as a person can see, so the seafloor is exposed. The next wave then rushes ashore within minutes and carries with it many floating debris that were destroyed by previous waves.

World Tsunami Day was first officially observed on 5 November 2016 After the announcement of the UN General assembly on 22 December 2015. The UN General Assembly called all the countries in international bodies to raise awareness about this natural disaster and share product ideas.

In the last 100 years, 58 tsunamis have killed over 260,000 people, more than any other natural disaster. The highest number of deaths occurred in December 2004, when the Indian Ocean tsunami struck. It killed 227,000 people in 14 countries, including Indonesia, Sri Lanka, India, and Thailand. Only three weeks after the tsunami, the international community gathered in Kobe, Japan, to adopt the 10-year Hyogo Framework for Action. This was the first comprehensive global disaster risk reduction agreement.